Sokoman Minerals Corp. (TSX-V: SIC) (OTCQB: SICNF) is pleased to release the results of Phase 4 diamond drilling at the 100%-owned Moosehead Project in North-central Newfoundland. The program successfully extended the strike length of the Eastern Trend to at least 400 metres (see attached drill plan) and the zone remains open to the north, south and at depth. The Company estimates true thicknesses of holes drilled from east to west are >80% of reported core length (ie. MH-19-69A, 75, 81 and older holes such as MH-19-52, 62 and 63 etc.), while reported intersections in holes drilled from west to east (ie. MH-19-68 and older holes such as 18-01, 17, 39, etc.) are approximately 50% of reported thickness. The summary of drilling highlights is tabulated below. Read complete Phase 4 assay results here. 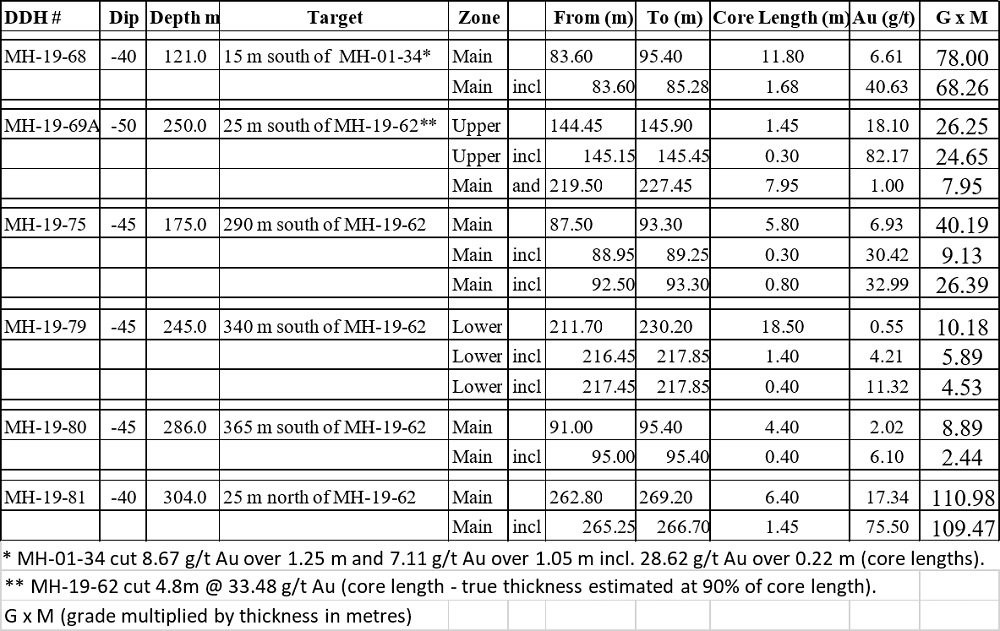 Timothy Froude, P. Geo., President and CEO, states: “We are extremely pleased with the results from the fourth phase of drilling at Moosehead, as well as the preliminary structural assessment by Earth Tectonics. The evidence suggests excellent potential exists to extend known high-grade shoots both up and down plunge and to depth as well as the discovery of additional high-grade shoots (ie. MH-19-75) at Moosehead. Sokoman’s persistence, and drilling strategy to date, is providing the information required to begin to formulate a clearer picture of what may be happening at the Eastern Trend and indeed, the remainder of the property.”

A total of 4,272 metres were drilled in 18 holes largely targeting the high-grade Eastern Trend drilled mostly from the east side of the pond. Multiple holes delivered high-grade results. MH-19-81, the final hole of Phase 4, successfully intersected the high-grade Main Zone 25 metres to the north of MH-19-62, the northernmost intersection of high-grade mineralization to date, and the zone remains open. MH-19-80, the southernmost hole drilled in the program, extended the gold bearing Eastern Trend to the south where it also remains open along strike and to depth.

The attached long section reflects a preliminary assessment from Earth Tectonics whereby the known mineralization is interpreted to plunge to the south. This new interpretation suggests that much of our original drilling remains open and why some holes appear to have missed the zone. The ongoing structural assessment demonstrates the potential for multiple, stacked, south plunging high-grade shoots in the NE portion of the Eastern Trend, and also suggests additional high-grade shoots exist to the SW, as supported by hole MH-19-75, drilled 290 m south of MH-19-62, which intersected near surface, visible gold bearing veins typical of the high grade Eastern Trend. MH-19-75 returned a 5.80 m intersection (core length) grading 6.93 g/t Au starting at 87.50 m downhole, including two visible gold bearing veins that assayed 30.42 g/t Au over 0.30 m (from 88.95 m), and 32.99 g/t Au over 0.80 m (from 92.50 m).

In terms of next steps, the Company expects to receive a detailed final report on the structural controls of mineralization at Moosehead by Earth Tectonics in the next two weeks and is moving ahead with permitting for an aggressive 2020 drilling campaign. This program will include a winter phase to take advantage of better ground conditions as well as possible additional ice-based drilling.

All core samples submitted for assay were saw cut by Sokoman personnel with one half submitted for assay and one half retained for reference. Samples were delivered in sealed bags directly to the lab by Sokoman Minerals personnel. Samples, including duplicates, blanks and standards, were submitted to Eastern Analytical Ltd. in Springdale, Newfoundland for gold analysis. Eastern Analytical is an accredited assay lab that conforms to requirements of ISO/IEC 17025. Samples with possible visible gold were submitted for total pulp metallics and gravimetric finish. All other samples were analyzed by standard fire assay methods. Total pulp metallic analysis includes: the whole sample is crushed to -10 mesh; then pulverized to 95% -150 mesh; the total sample is weighed and screened 150 mesh; the +150 mesh fraction is fire assayed for Au, and a 30 g subsample of the -150 mesh fraction is fire assayed for Au; with a calculated weighted average of total Au in the sample reported as well. One blank and one industry approved standard for every twenty samples submitted, is included in the sample stream. In addition, random duplicates of selected samples are analyzed in addition to the in-house standard and duplicate policies of Eastern Analytical.

This news release has been reviewed and approved by Timothy Froude, P. Geo., a “Qualified Person” under National Instrument 43-101 and President and CEO of Sokoman Minerals Corp.

The Company would like to thank the Government of Newfoundland for its financial support of the ongoing exploration at Moosehead through the JEA program.