Sokoman Minerals Corp. (TSXV: SIC) (OTCQB: SICNF) is pleased to announce that ongoing Phase 6 drilling at the 100%-owned Moosehead Property in central Newfoundland has intersected additional high-grade gold mineralization at both the Lower Eastern Trend and in the 75 Zone, located approximately 100 m along strike south of the main Eastern Trend. (Note: see full table of results, plan map and long section for the 75 Zone and the Eastern Trend further in this release. Not all previous intersections appear on section.)

Highlights of the recently-received rush assays (including total pulp metallics) include:

The Company is also pleased to announce that reconnaissance drilling testing for the source of gold-bearing boulders, discovered earlier this year 300 m to the east of North Pond (see July 6, 2021 news release), has intersected a significant structure (named the 253 Zone), featuring strong quartz veining and variable sulphide mineralization, mainly pyrite and arsenopyrite. Assays are pending and additional drilling is planned.

Tim Froude, President and CEO of Sokoman, says: “We are extremely pleased with the progress of Phase 6 with approximately 19,000 m remaining to be drilled this year. Today’s results give strong support to the growth potential of the 75 Zone with the drilling suggesting that the 75 Zone is linked to the larger Eastern Trend to the north. Our goal is to verify this connection by drilling step-out holes to the north and also down-plunge to test the zone at depth.

“The barge-based component of Phase 6 has started, and the first hole has been completed without any issues with drilling to continue until freeze-up, expected to be in late November / early December. At least 5,000 m of drilling is planned to test the Upper Eastern Trend and Footwall Splay targets where previous drilling has given some of our best holes to date including earlier Phase 6 hole MH-21-115 that gave 4.6 m of 47 g/t Au (Footwall Splay) and 8 m of 68 g/t Au (Upper Eastern Trend).

“We are also pleased to report that drilling which tested the area of the VG boulders, located earlier this summer (July 6, 2021, News Release), has intersected a previously unknown structure, parallel to the main Eastern Trend. The new structure (the 253 Zone), which carries significant veining with associated sulphides, is potentially several kilometres in strike extent based on geophysics, is open both to the northeast and southwest and will be subject to further drilling this fall. Assays are pending and further details will be provided once additional holes have been completed and assays have been received.

“We currently have four drills at Moosehead, including the recently arrived barge rig. Our intention is to temporarily relocate one of the land-based rigs for a month to carry out a Phase 1 drill program (2,000 m) at our Grey River JV with Benton Resources Inc. to test high-priority targets before winter sets in. This will take place shortly with the rig returning to Moosehead to continue testing regional targets, including the newly discovered 253 Zone until year-end.”

One drill continues to infill / extend gold mineralization in the Lower Eastern Trend, and the barge-based drilling has commenced in the Upper Eastern Trend / Footwall Splay targets. Results from the Eastern Trend and the 75 Zone, up to September 28, 2021, are shown in the table below. 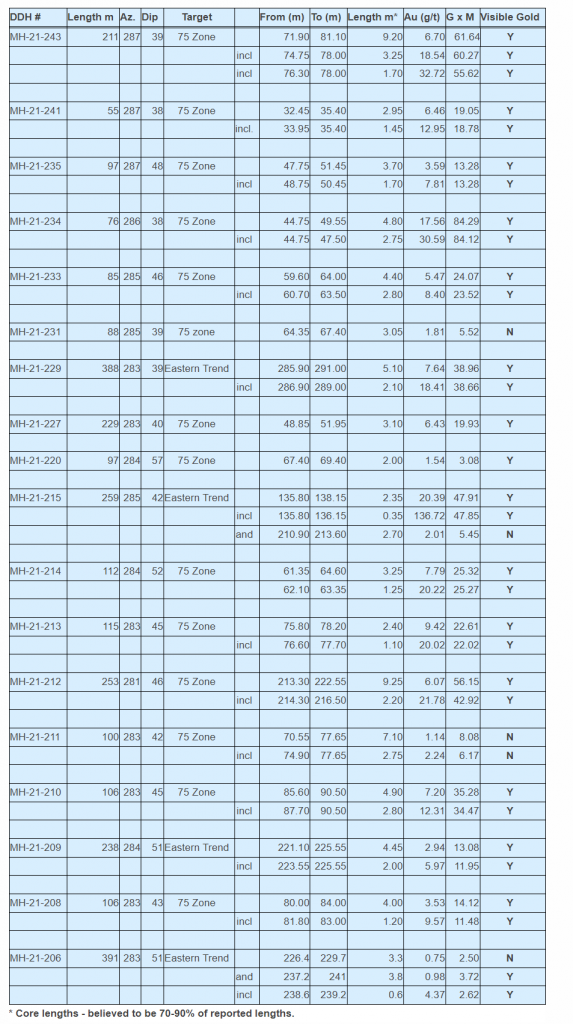 About the Moosehead Gold Project

The 100%-owned Moosehead Gold Project is located along the Trans-Canada Highway in north-central Newfoundland, on the same structural trend as the advanced Valentine Lake Project (Marathon Gold), and adjacent to New Found Gold’s Queensway Project. Both the Moosehead and Queensway projects are targeting high-grade, turbidite-hosted, Fosterville-type gold mineralization. At least five zones of significant gold bearing mineralization have been identified to date at Moosehead with multiple high-priority targets, independent of the known zones, remaining to be tested. In Phases 1 to 5, the Company completed 23,378 m (106 holes). In Phase 6, the Company has completed 31,000 m in 170 holes (up to MH-21-280) of the 50,000 m drill program.

This news release has been reviewed and approved by Timothy Froude, P.Geo., a “Qualified Person” under National Instrument 43-101 and President and CEO of Sokoman Minerals Corp.

To ensure a working environment that protects the health and safety of the staff and contractors, Sokoman is operating under federally and provincially mandated and recommended guidelines during the current COVID-19 alert level.

All core samples submitted for assay were saw cut by Sokoman personnel with one-half submitted for assay and one-half retained for reference. Samples were delivered in sealed bags directly to the lab by Sokoman personnel. Samples, including duplicates, blanks and standards, were submitted to Eastern Analytical Ltd. in Springdale, Newfoundland for gold analysis. Eastern Analytical Ltd. is an accredited assay lab that conforms to the requirements of ISO/IEC 17025. Samples with possible visible gold were submitted for total pulp metallics and gravimetric finish. All other samples were analyzed by standard fire assay methods. Total pulp metallic analysis includes: the whole sample is crushed to -10 mesh; then pulverized to 95% -150 mesh. The total sample is weighed and screened to 150 mesh; the +150 mesh fraction is fire assayed for Au, and a 30 g subsample of the -150 mesh fraction is fire assayed for Au; with a calculated weighted average of total Au in the sample reported as well. One blank and one industry approved standard for every twenty samples submitted, is included in the sample stream. Random duplicates of selected samples are analyzed in addition to the in-house standard and duplicate policies of Eastern Analytical Ltd. All reported assays are uncut.

Sokoman Minerals Corp. is a discovery-oriented company with projects in the province of Newfoundland and Labrador, Canada. The Company’s primary focus is its portfolio of gold projects; flagship, advanced-stage Moosehead, Crippleback Lake (optioned to Trans Canada Gold Corp.) and East Alder (optioned to Canterra Minerals Corporation) along the Central Newfoundland Gold Belt, and the district-scale Fleur de Lys project in northwestern Newfoundland, that is targeting Dalradian-type orogenic gold mineralization similar to the Curraghinalt and Cavanacaw deposits in Northern Ireland. The Company also recently entered into a strategic alliance with Benton Resources Inc. through three, large-scale joint-venture properties including Grey River, Golden Hope and Kepenkeck in Newfoundland.

Sokoman now controls, independently and through the Benton alliance, over 150,000 hectares (>6,000 claims – 1500 sq. km), making it one of the largest landholders in Newfoundland, in Canada’s newest and rapidly-emerging gold districts. The Company also retains an interest in an early-stage antimony/gold project (Startrek) in Newfoundland, optioned to White Metal Resources Inc., and in Labrador, the Company has a 100% interest in the Iron Horse (Fe) project which has Direct Shipping Ore (DSO) potential.

The Company would like to thank the Government of Newfoundland and Labrador for financial support of the Moosehead Project through the Junior Exploration Assistance Program. 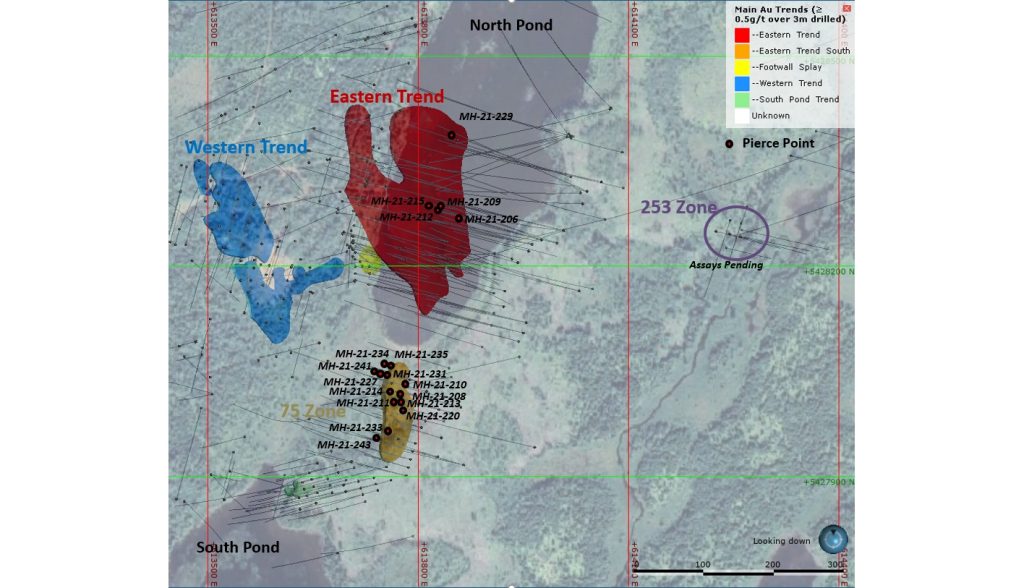 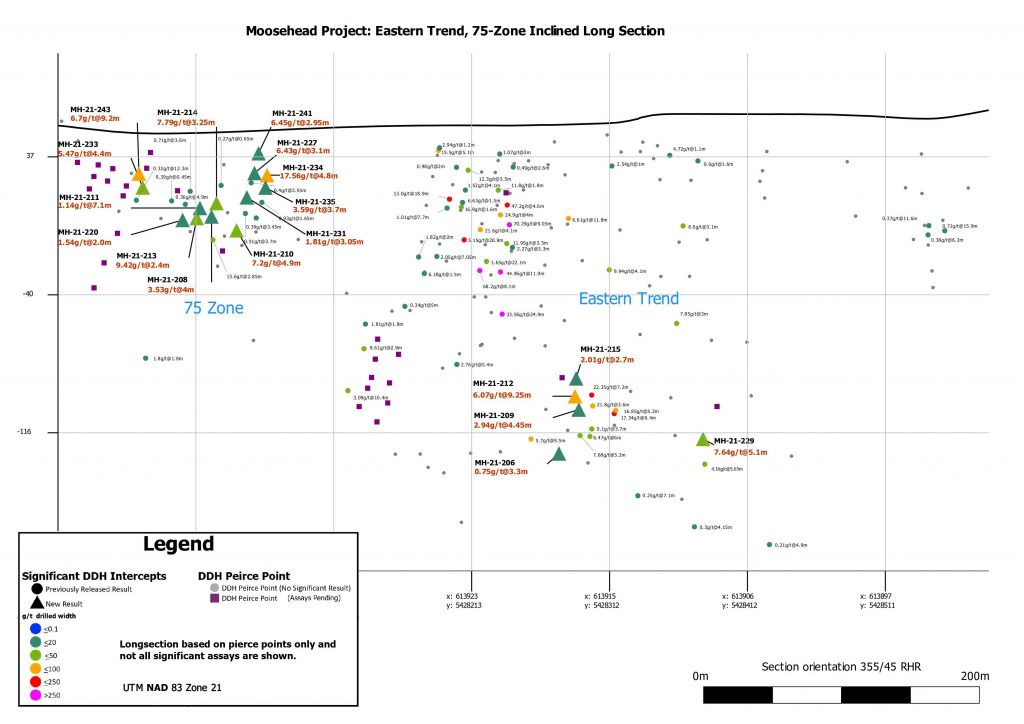