Sokoman Minerals Corp. (TSX-V:SIC) (OTCQB:SICNF) is pleased to announce that ongoing Phase 6 drilling at the 100%-owned Moosehead Property in central Newfoundland has intersected additional high-grade gold mineralization at both the Eastern Trend and South Pond Zones. In addition, prospecting in an area 300 m to the east of North Pond, an area with minimal drilling, has located visible-gold-bearing quartz float returning 9.2 and 14.3 g/t Au from total pulp metallics assays with additional assays pending.

Tim Froude, President and CEO of Sokoman, says: “We are extremely pleased with the results from the early stages of this summer exploration program at Moosehead. The discovery of a new high-grade boulder train at the limits of our drilling suggests that other mineralized zones are likely to be found at Moosehead. Our experience to-date with boulders is that they are generally close to the source, given the average thickness of overburden. Drilling will continue and we are expecting the barge to arrive on the property in four-five weeks, permits are pending. Our drill results at the Lower Eastern Trend demonstrate good continuity and grade, and our most recent success in MH-21-191 at 165 m vertical is a great beginning as we infill the down-dip portion of the Eastern Trend. At South Pond, we have extended the near-surface, high-grade mineralization and are working our way to the north towards the Western Trend where this 250 m corridor has had minimal drilling, and we look forward to connecting these zones. Field work has also begun on all three JV projects with Benton Resources, and updates on all of them will be provided in the coming weeks.”

The following table highlights results to date from the ongoing Phase 6 drilling program. 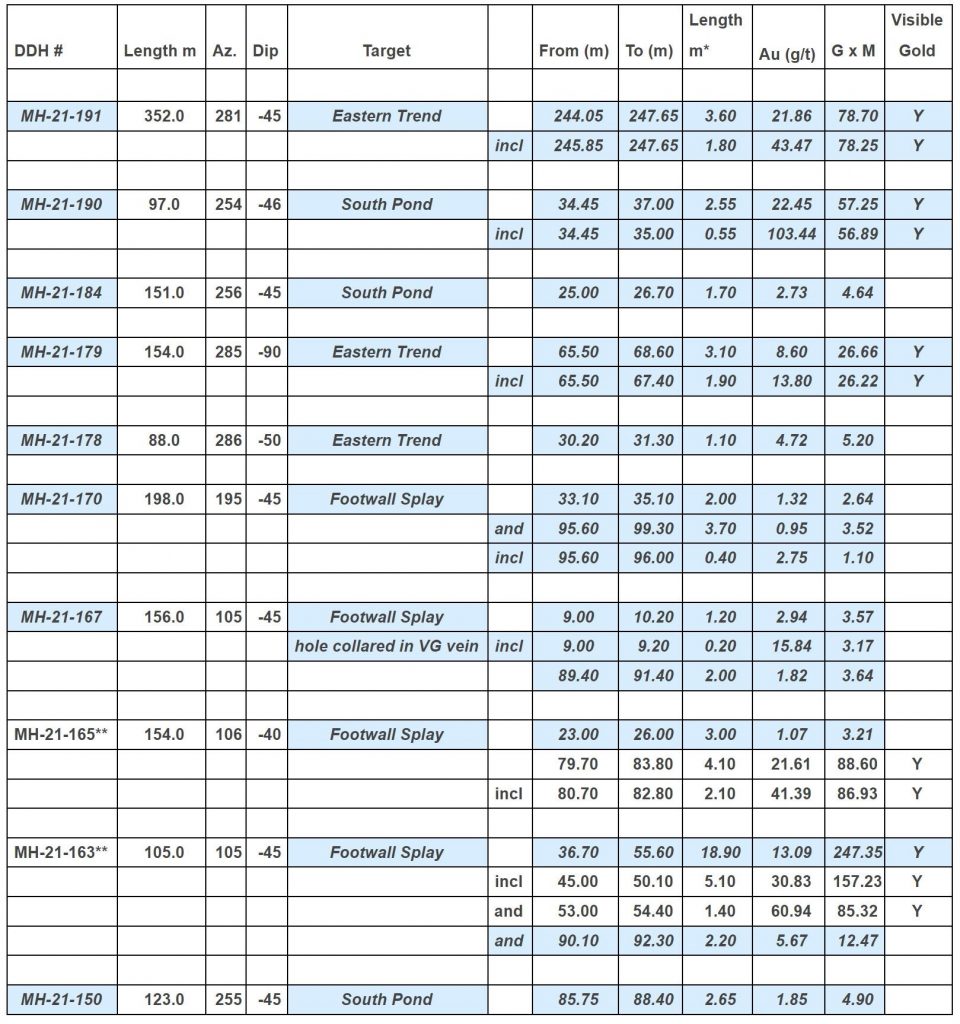 Core lengths – believed to be 70% to 90% of reported lengths.
** Follow-up logging and sampling was completed after priority core was logged and sampled.
Italicized text and figures denote new assays, all others are previously released.

Drilling of the Footwall Splay and Upper Eastern Trend reflects infill and step-out results. MH-21-167 collared in a visible-gold-bearing vein returning 2.94 g/t Au over 1.2 m, extending the Footwall Splay 27 m to the south from MH-21-157, which returned 12.39 g/t Au over 3.5 m including 28.57 g/t Au over 1.50 m from 36.3 m downhole. The Footwall Splay currently has a 175 m N-S strike length over a minimum width of 25 m. MH-21-178 tested the Upper Eastern Trend returning 4.72 g/t Au over 1.10 m from 30.20 m downhole, 25 m vertically below surface. Additional drilling will be carried out using a barge-based program on North Pond with the drill contractor modifying the barge to accommodate the drill. Sokoman anticipates starting this program in 4-6 weeks.

Holes MH-21-163 and 165 both report shoulder and infill sampling, which enhances previously released results, including additional zones of mineralization. 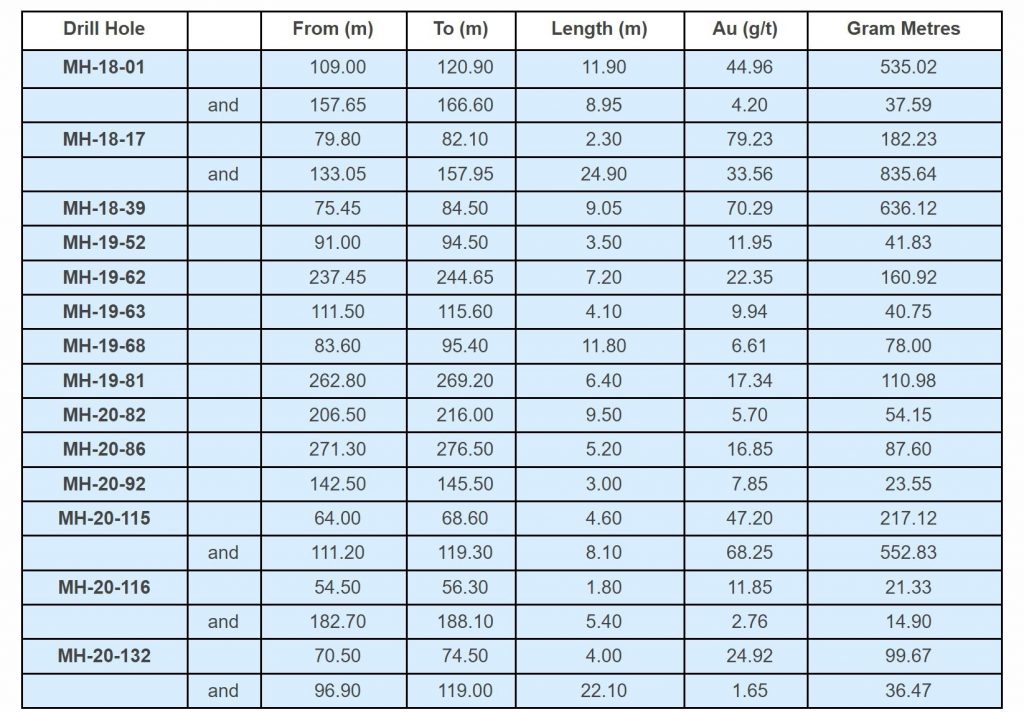 About the Moosehead Gold Project

The 100%-owned Moosehead Gold Project is located along the Trans-Canada Highway in north-central Newfoundland, on the same structural trend as the advanced Valentine Lake Project (Marathon Gold) and adjacent to New Found Gold’s Queensway Project. Both the Moosehead and Queensway projects are targeting high-grade, turbidite-hosted, Fosterville-type gold mineralization. At least five zones of significant gold-bearing mineralization have been identified to-date at Moosehead and multiple high-priority targets independent of the known zones remain to be tested. The Company has completed approximately 18,000 m of a 50,000 m drill program at Moosehead.

This news release has been reviewed and approved by Timothy Froude, P. Geo., a “Qualified Person” under National Instrument 43-101, and President and CEO of Sokoman Minerals Corp.

To ensure a working environment that protects the health and safety of the staff and contractors, Sokoman is operating under federally and provincially mandated and recommended guidelines during the current COVID-19 alert level.

All core samples submitted for assay were saw cut by Sokoman personnel with one-half submitted for assay and one-half retained for reference. Samples were delivered in sealed bags directly to the lab by Sokoman Minerals personnel. Samples, including duplicates, blanks and standards, were submitted to Eastern Analytical Ltd. in Springdale, Newfoundland and Labrador for gold analysis. Eastern Analytical is an accredited assay lab that conforms to requirements of ISO/IEC 17025. Samples with possible visible gold were submitted for total pulp metallics and gravimetric finish. All other samples were analyzed by standard fire-assay methods. Total pulp metallic analysis includes: the whole sample being crushed to -10 mesh; then pulverized to 95% -150 mesh. The total sample is weighed and screened 150 mesh; the +150 mesh fraction is fire assayed for Au, and a 30 g subsample of the -150 mesh fraction is fire assayed for Au; with a calculated weighted average of total Au in the sample reported as well. One blank and one industry-approved standard for every twenty samples submitted, is included in the sample stream. Random duplicates of selected samples are analyzed in addition to the in-house standard and duplicate policies of Eastern Analytical Ltd. All reported assays are uncut.

Sokoman Minerals Corp. is a discovery-oriented company with projects in Newfoundland and Labrador, Canada. The Company’s primary focus is its portfolio of gold projects: flagship Moosehead, Crippleback Lake (optioned to Trans Canada Gold Corp.) and East Alder (optioned to Canterra Minerals Corporation) along the Central Newfoundland Gold Belt, and the district-scale Fleur de Lys project in northwestern Newfoundland, which is targeting Dalradian-type orogenic gold mineralization similar to the Curraghinalt and Cavanacaw deposits in Northern Ireland, and Cononish in Scotland. The Company also recently entered into a strategic alliance with Benton Resources Inc. through three large-scale joint venture properties including Grey River, Golden Hope and Kepenkeck in Newfoundland. Sokoman now controls independently and through the Benton alliance over 150,000 hectares (>6,000 claims – 1,500 sq. km), making it one of the largest landholders in Newfoundland, Canada’s newest and rapidly-emerging gold districts. The Company also retains an interest in an early-stage antimony/gold project (Startrek) in Newfoundland, optioned to White Metal Resources Inc., and in Labrador, the Company has a 100% interest in the Iron Horse (Fe) project that has Direct Shipping Ore (DSO) potential.

The Company would like to thank the Government of Newfoundland and Labrador for financial support of the Moosehead Project through the Junior Exploration Assistance Program. 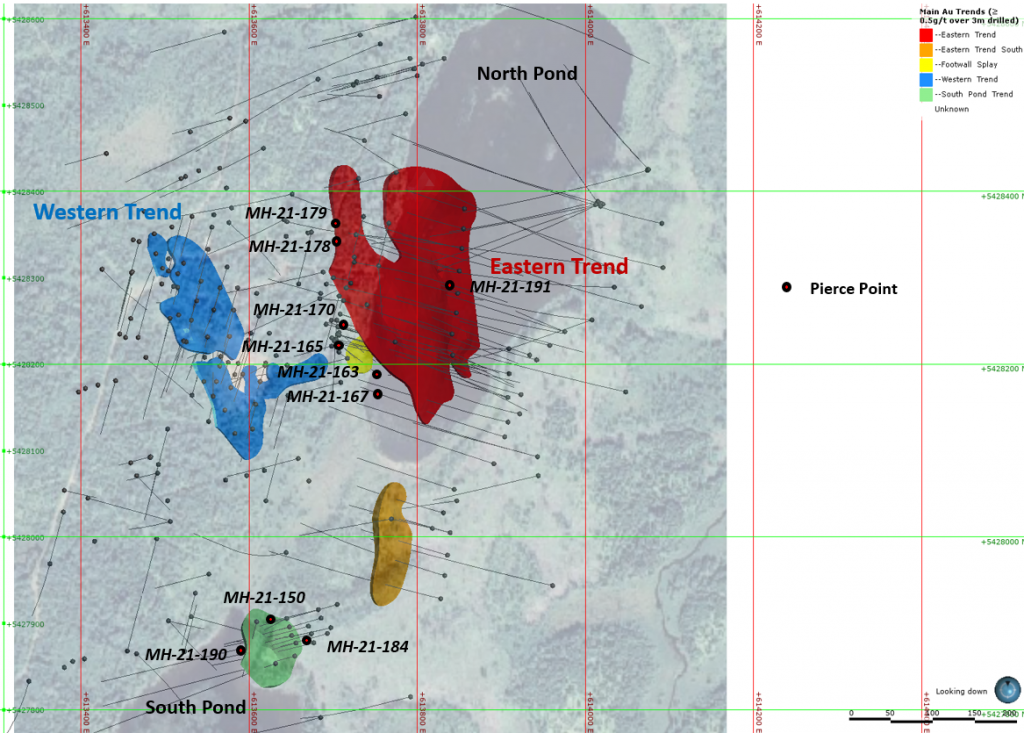 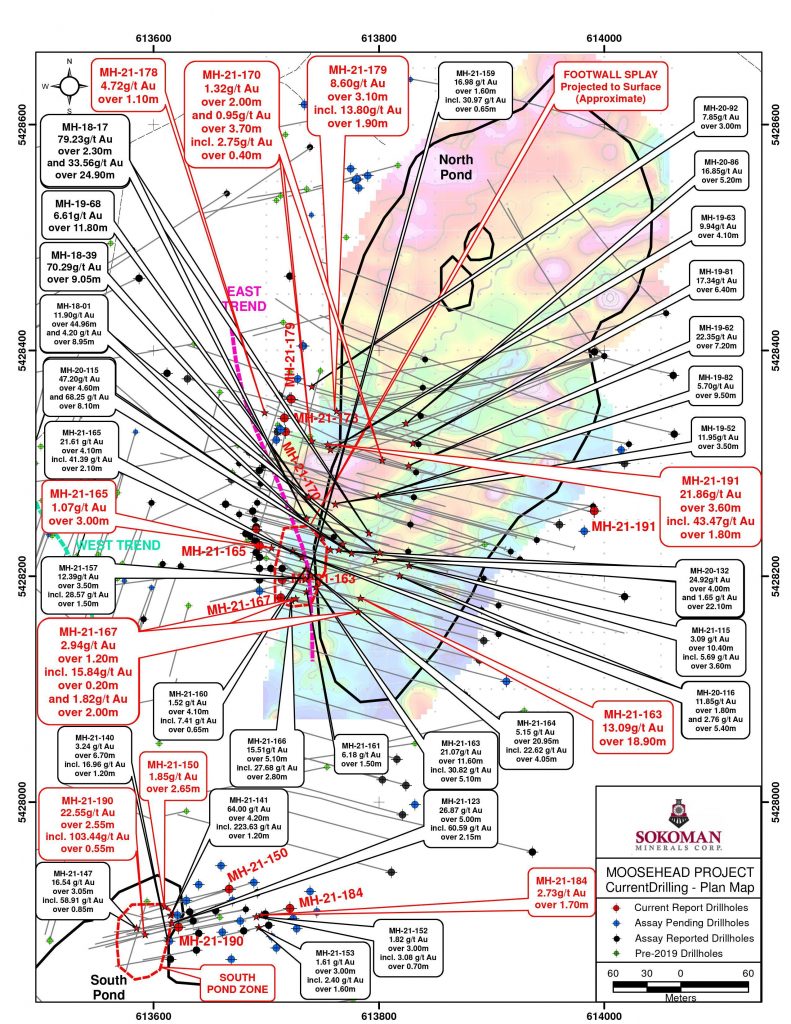