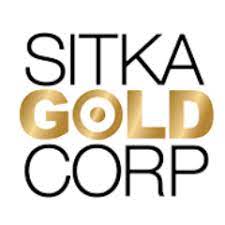 Sitka Gold Corp. (CSE: SIG) (FSE: 1RF) (OTCQB: SITKF) is pleased to announce initial assay results from the first two drill holes, AG22-09 and AG22-10, completed during the ongoing 2022 drilling program at its Alpha Gold Property located on the southeast projection of the prolific Cortez gold trend in Nevada. The Company is conducting a planned 1,500 m drilling program at Alpha Gold where drilling at hole AG22-12, which is a step-out located 5,600 m along trend from AG22-10, is currently underway. Alteration and mineralization observed in AG22-11 and AG22-12 indicate that the scale of this Carlin-type gold system is over six kilometres in strike length (see Figure 1). Assays for AG22-11 and AG22-12 are currently pending.

Highlights of gold assays include:

Cor Coe, CEO and Director of Sitka Gold comments, “The initial results from the Company’s ongoing 2022 drill program at Alpha Gold continue to affirm we are on to a very significant Carlin-type gold system. These are the best gold intervals we have intercepted to date and add to the mounting evidence that this system has the potential to host a significant Carlin-type gold deposit. In addition, alteration and mineralization observed in drill holes AG22-11 and AG22-12 have significantly expanded the known footprint of this system with their massive step outs of 940 m and 5,600 m respectively SSE from AG22-10 (see Figure 1), adding to the exceptional tonnage potential of this target. Considering that we have only drilled and received results from 10 drill holes since the conceptual geological model was presented in 2020 on this totally new, undrilled area, it is extremely impressive that our geological team has advanced this project to the confirmation stage that Alpha Gold hosts a large, very robust Carlin-type gold system. Alpha Gold is located directly on the southeast projection of the Cortez trend, known to host world class, multi-million ounce Carlin-type gold deposits such as Barrick Gold’s Goldrush deposit located approximately 40 kms to the northwest. Since the discovery of this Carlin-type gold system at Alpha Gold, drilling has progressively produced larger intervals with better gold grades as we continue to vector toward the core of this system with additional data generated from drill hole assays and an enhanced geological interpretation. We are eagerly awaiting additional drill hole results as drilling continues at our 100% owned Alpha Gold Property.”

The NNW structural zone at Alpha Gold is very subtle at surface and has demanded a methodical and systematic exploration strategy. Increasingly strong results from AG22-09 and 10 have confirmed the location and orientation of the subsurface mineralization system.  That new information was employed in very aggressive step-outs in holes AG22-11 and 12.  Alteration and mineralization in both new holes indicate they remain on target continuing to define the same structure along a strike extent of over six kilometers from AG21-03 to AG22-12 (see Figure 1).  This is very exciting and generates an abundance of new targets both along strike and at depth in the deeper even more permissive downward stacked set of host rock horizons. Confirmation of the target structures on broad strike offsets also provides for permitting a much larger set of well-chosen sites for future drilling.  Progress at Alpha Gold has made an important leap forward and has generated several newly refined targets to test in the search for the strongest parts of this almost entirely subsurface Carlin-type gold system.

Gold mineralization in AG22-10 occurred in the Horse Canyon Equivalent horizon near the Devils Gate Limestone contact.  The gold mineralization included highly carbonaceous, pyritic, decalcified and silicified strata on the hanging wall side of a west dipping normal fault zone characterized by karst cavities and severe decalcification. Lithologic logs from the hole and surface mapping indicate a larger offset normal fault occurs west of the hole and remains untested.  The hole confirmed that AG21-08 was well out on the east limb of the now better-defined NNW anticline and indicates continued strong potential to the west (Figure 3).

AG22-09 intercepted 0.51 g/t over 10.67 m from 124.97 m.  Gold mineralization occurred in the Devonian Shale unit and upper Horse Canyon equivalent unit above the prime host horizon, which was replaced by a karsted fault zone, probably the strike projection of the same karst zone encountered in AG22-10. AG22-09 had to be terminated when drilling conditions became unmanageable and samples could not be recovered due to the hole apparently being deflected into karst cavities along the fault.  Material recovered from the karst zone indicated the footwall of the fault was basal Horse Canyon equivalent below the prime host rock zone which was faulted out.

Holes AG22-09 and AG22-10 have provided excellent confirmation of the NNW structural zone which is not adequately exposed on the surface in this area due to thin gravel cover and they provide a framework for better testing of the host rock horizons adjacent to it.  Results suggest that gold grade relates to host rock more than it does to the fault zones.  With the fault plane now relatively well defined it becomes possible to target not only the Horse Canyon equivalent host horizon, but also potentially even more transmissive host horizons at depth in the Bartine Member of the McColley Canyon Fm and the lower Upper Denay Fm.  The former is the host to much of the Gold Bar deposit and equivalent to the prolific Wenban 5 host horizon at the Goldrush deposit.  The lower Upper Denay Fm is a platy silty limestone known to be a secondary host that will be crossed by any holes directed at McColley Canyon targets.

The strike extension of the NNW structural zone at Alpha NW remains open to the north and south.  The apparent preference of gold mineralization to host stratigraphy rather than karsted fault zones in the latest drilling generates renewed interest in AG21-03 which encountered a karst cavity comparable in size to those in AG22-09 and 10 as well as an eight-meter clay fault gouge.  The favorable part of the Horse Canyon equivalent host rock horizon was faulted out.  Better testing of the host rock is still needed near AG21-03 along with the intervening area back towards AG22-09.  Gold grades in the karst zone of AG21-03 were actually slightly better than those in the immediate karst zones of AG22-09 or 10.  Both the NNW trend from AG22-09 to AG21-03 and the larger N-S fault through AG21-03 merit further testing in consideration of the above.  Depth to the Devils Gate Limestone is less than 100 m in AG21-03, so any positive follow up results there would make it an excellent location for testing the McColley Canyon Fm target horizon at the shallowest depth along the structural trend.

On the SSE projection of the structural trend, AG22-11 was collared 940 m SSE of AG22-10 (Figure 1).  The hole was directed WSW toward the inferred projection of the structural zone and encountered a rhyolite dike-filled fault zone followed by decalcification and pyrite mineralization in the Horse Canyon equivalent host horizon.  The hole was completed to the top of the Devils Gate Limestone at 522.73 m.  AG22-12 was collared at Frazier Creek 5,600 meters SSE of AG22-10.  The hole encountered a major dike-filled structure along with pyrite mineralization in the upper Devonian Shale unit and is still in progress in the lower part of the Devonian Shale.  No assay results have been received for these two holes.

Sitka Gold has acquired a 100% interest in the Alpha Gold Project, located along the southeast projection of the prolific Cortez Gold Trend in Eureka County, approximately 135 kilometres southwest of Elko, Nevada. The Project is comprised of one contiguous claim block totaling 239 lode claims covering an area of approximately 4,780 acres (1,934 hectares) and is accessible via a dirt road, approximately 2 km west of Nevada State Highway 278.

The Project was initially staked after the location was recognized as the intersection of the regional-scale Pine Valley anticline with northeasterly fold trends exposed in the Roberts Mountains. Overprinting NNW folds coincident with the projection of the Cortez Trend were subsequently recognized and found to be important alteration and mineralization controls. Of primary importance at the Alpha Gold location is that the rocks have been down-dropped significantly by late extensional faulting. Prior to extension, and during the critical 36-42 Ma Carlin-type mineralization event, the fold crest at Alpha Gold would have been a regional highpoint among nearby mountain ranges. Well exposed ‘lower plate windows’ near Alpha Gold have been extensively explored for Carlin-type gold deposits with a number of deposits found along the limbs.

Three previous drill programs totaling 2604 meters in 8 holes have been completed at Alpha Gold since its acquisition and have advanced the Property from an undrilled geologic concept with a surface alteration and pathfinder element anomaly, to a large wide-open Carlin-type gold system with thick, low-grade gold intercepts, from wide-spaced drilling. The Company is currently conducting its 4th drill program on the Property.

Sitka Gold Corp. is a well-funded mineral exploration company headquartered in Canada. The Company is managed by a team of experienced industry professionals and is focused on exploring for economically viable mineral deposits with its primary emphasis on gold, silver and copper mineral properties of merit. Sitka currently has an option to acquire a 100% interest in the RC, Barney Ridge, Clear Creek and OGI properties in the Yukon and the Burro Creek Gold property in Arizona. Sitka owns a 100% interest in its Alpha Gold property in Nevada, its Mahtin Gold property in the Yukon and its Coppermine River project in Nunavut.

Sitka is currently awaiting additional assay results for 10 diamond drill holes from its recently completed Phase II summer diamond drill program at its RC Gold Project in the Yukon. Up to 1,500 metres of drilling is also currently underway at the Company’s Alpha Gold Property in Nevada where a new Carlin-type gold system was recently discovered and where the Company is focused on vectoring towards the high-grade core of this system.

The scientific and technical content of this news release has been reviewed and approved by Cor Coe, P.Geo., Director and CEO of the Company, and a Qualified Person as defined by National Instrument 43-101. 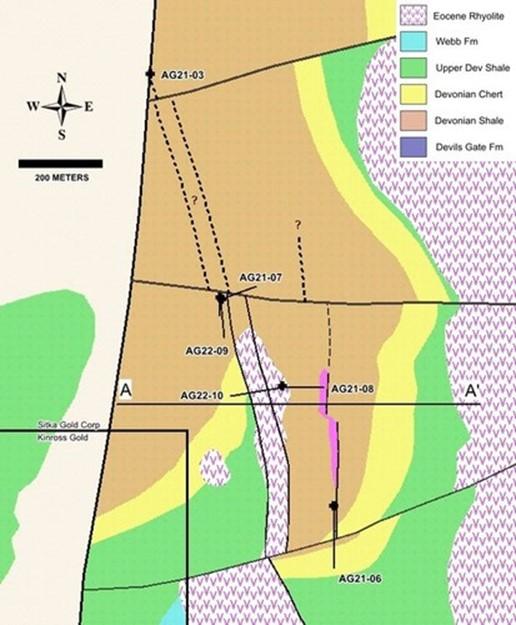 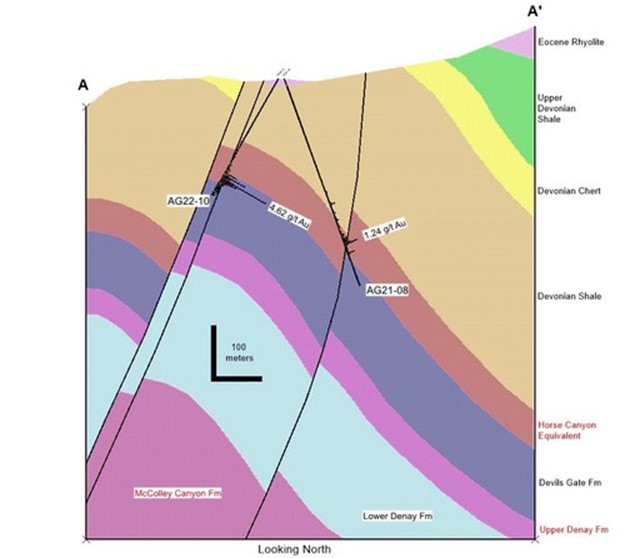