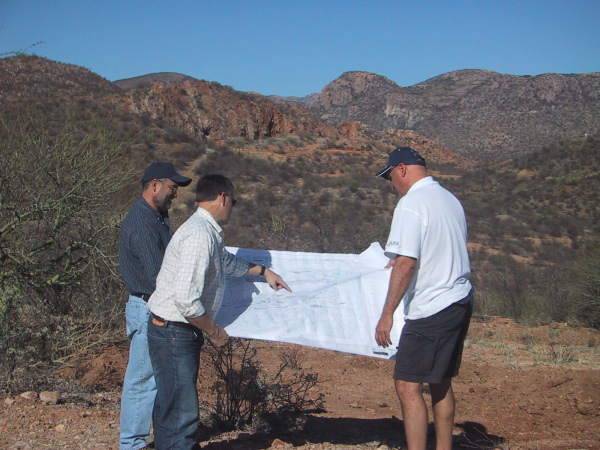 SilverCrest Mines Inc. (TSX VENTURE:SVL)(NYSE MKT:SVLC)(NYSE Amex:SVLC)  announce the completion of further drilling at the Santa Elena Mine in Sonora, Mexico. The drilling of 5 core and 16 RVC holes was completed to define several objectives (see attached Figure: http://media3.marketwire.com/docs/svl1113-F1.jpg) in a planned 110 hole program including; 1) confirm tonnage and grade of the remaining open pit reserves for Life of Mine Plan (Holes SERCP-1A to SERCP-11V), 2) test further mineralization below the current open pit plan (Holes SERCH12-36 to SERCP-SERCP38), 3) test newly identified mineralization in the NW highwall of the open pit (Holes SE12-97 to SE12-101), and 4) re-categorize and expand current underground Resources. To date, this drill program has been successful and will assist with resource confirmation, conversion, and inclusion in the upcoming Pre-Feasibility Study for the Santa Elena Expansion Project.
Gold and silver values in the SERCP and SE series of holes range from 0.13 gpt to 8.6 gpt gold and 17.4 to 244.0 gpt silver. Mineralized intervals range from 6.0 metres to 52.0 metres. All mineralized drill intercepts are near true thicknesses for undesignated angled holes or those designated as “A”, with vertical holes designated as “V” representing apparent thickness. The most significant intercepts are 52 metres grading 2.19 gpt Au and 95.5 gpt Ag (Hole SERCP-9V) and 16 metres grading 6.18 gpt Au and 103.4 gpt Ag (Hole SERCP-11A) which are apparent and true thicknesses respectively. The most significant assay results in this series of holes are shown in the following table;
All sample analyses were completed by the Santa Elena onsite laboratory with checks at ALS Chemex in Hermosillo, Mexico and North Vancouver, BC. The consistent thickness of certain intervals in a number of the holes is a result of the sampling procedures utilized in reverse circulation drilling.
In-Fill Pit holes confirmed the projection of higher grades expected to be mined in the open pit in 2013 to 2014. These holes are being used to update the Life of Mine Plan and open pit reserves to be included in production budgets and the Pre-Feasibility Study for the Expansion Plan.
Holes drilled in Santa Elena U/G South show increased potential for new underground resources below the pit and are being incorporated into the new resource model and Expansion PFS. Further drilling is anticipated in 2013.

Santa Elena NW holes SE12-97 to SE12-99 intercepted high grade values over 1 to 4 metres wide. These intercepts along with in-pit ore control holes in the NW wall of the pit suggest a possible new underground target. Holes SE12-100 and 101 were drilled on separate targets but did not intercept significant mineralization. Further drilling is anticipated in 2013.

Sixty six holes have been completed to date for underground resource conversion to reserves and expansion. Results of these holes will be released once compilation of results is complete. Three drills are currently on site to complete drilling by the end of 2012. Revised Santa Elena Resources and Reserves are expected along with the PFS in Q1 2013. This program has been extended to achieve required drilling to assist with the conversion of Resources to Reserves and potentially expand known Resources.

SilverCrest Mines Inc. (TSX VENTURE:SVL)(NYSE MKT:SVLC)(NYSE Amex:SVLC) is a Canadian precious metals producer headquartered in Vancouver, BC. SilverCrest’s flagship property is the 100%-owned Santa Elena Mine, located 150 km northeast of Hermosillo, near Banamichi in the State of Sonora, Mexico. The mine is a high-grade, epithermal gold and silver producer, with an estimated life of mine cash cost of US$8 per ounce of silver equivalent (55:1 Ag:Au). SilverCrest anticipates that the 2,500 tonnes per day facility should recover approximately 4,805,000 ounces of silver and 179,000 ounces of gold over the 6.5 year life of the open pit phase of the Santa Elena Mine. A three year expansion plan is underway to double metals production at the Santa Elena Mine and exploration programs are rapidly advancing the definition of a large polymetallic deposit at the La Joya property in Durango State.

This news release contains “forward-looking statements” within the meaning of Canadian securities legislation and the United States Securities Litigation Reform Act of 1995. Such forward-looking statements concern the Company’s anticipated results and developments in the Company’s operations in future periods, planned exploration and development of its properties, plans related to its business and other matters that may occur in the future. These statements relate to analyses and other information that are based on expectations of future performance, including silver and gold production and planned work programs. Statements concerning reserves and mineral resource estimates may also constitute forward-looking statements to the extent that they involve estimates of the mineralization that will be encountered if the property is developed and, in the case of mineral reserves, such statements reflect the conclusion based on certain assumptions that the mineral deposit can be economically exploited.

Forward-looking statements are subject to a variety of known and unknown risks, uncertainties and other factors which could cause actual events or results to differ from those expressed or implied by the forward-looking statements, including, without limitation: risks related to precious and base metal price fluctuations; risks related to fluctuations in the currency markets (particularly the Mexican peso, Canadian dollar and United States dollar); risks related to the inherently dangerous activity of mining, including conditions or events beyond our control, and operating or technical difficulties in mineral exploration, development and mining activities; uncertainty in the Company’s ability to raise financing and fund the exploration and development of its mineral properties; uncertainty as to actual capital costs, operating costs, production and economic returns, and uncertainty that development activities will result in profitable mining operations; risks related to reserves and mineral resource figures being estimates based on interpretations and assumptions which may result in less mineral production under actual conditions than is currently estimated and to diminishing quantities or grades of mineral reserves as properties are mined; risks related to governmental regulations and obtaining necessary licenses and permits; risks related to the business being subject to environmental laws and regulations which may increase costs of doing business and restrict our operations; risks related to mineral properties being subject to prior unregistered agreements, transfers, or claims and other defects in title; risks relating to inadequate insurance or inability to obtain insurance; risks related to potential litigation; risks related to the global economy; risks related to the Company’s status as a foreign private issuer in the United States; risks related to all of the Company’s properties being located in Mexico and El Salvador, including political, economic, social and regulatory instability; and risks related to officers and directors becoming associated with other natural resource companies which may give rise to conflicts of interests. Should one or more of these risks and uncertainties materialize, or should underlying assumptions prove incorrect, actual results may vary materially from those described in the forward-looking statements. The Company’s forward-looking statements are based on beliefs, expectations and opinions of management on the date the statements are made. For the reasons set forth above, investors should not place undue reliance on forward-looking statements.
The information provided in this news release is not intended to be a comprehensive review of all matters and developments concerning the Company. It should be read in conjunction with all other disclosure documents of the Company. The information contained herein is not a substitute for detailed investigation or analysis. No securities commission or regulatory authority has reviewed the accuracy or adequacy of the information presented.
J. Scott Drever, President
SILVERCREST MINES INC.
Neither TSX Venture Exchange nor its Regulation Services Provider (as defined in the policies of the TSX Venture Exchange) accepts responsibility for the adequacy or accuracy of this release.
CONTACT INFORMATION:
SilverCrest Mines Inc.
Fred Cooper
(604) 694-1730 ext. 108 or Toll Free: 1-866-691-1730
Fax: (604) 694-1761
info@silvercrestmines.com
www.silvercrestmines.com
Return to Home page