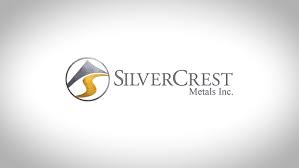 SilverCrest Metals Inc. is pleased to announce drill results from the Luigi Vein on the Las Chispas Property located in Sonora, Mexico. SilverCrest discovered the Luigi Vein in the footwall of the Las Chispas Vein in mid-2017 but it remained un-named until the Company completed enough drilling to delineate an actual mineral vein. Several of the announced holes in this release were previously disclosed as an un-named vein. There are 23 known epithermal veins on the Property. The Company has tested ten (10) of these 23 veins (the Babicanora, Babicanora Footwall, Las Chispas, Giovanni, La Blanquita, William Tell, Varela, Granaditas, Luigi and Amethyst veins), all of which have drill-intersected high-grade mineralization. The Luigi Vein was not included in the recently announced maiden resource (refer to the Company’s news release dated February 26, 2018).

Note: all numbers are rounded. All intercepts were previously announced as “Un-named veins” except where noted.
*  AgEq based on 75 (Ag):1 (Au) and 100% metallurgical recovery.
†  True thickness reinterpreted on intercept from previous news release.
§  New drill intercept.

Drill hole numbering for the Luigi Vein is out of sequence and dates back several months into 2017 as the Luigi Vein was not identified as a vein until subsequent holes were drilled. None of the drill holes for the Luigi Vein are included in the Company’s maiden resource previously announced on February 26, 2018. Please refer to news releases dated May 11, 2017, August 3, 2017, and November 28, 2017 for intercepts marked as “un-named” from previous announcement of drill results. Hole LCU18-25 is a new intercept for this release. Refer to attached Figure for holes that were below the Company’s 150 gpt AgEq cutoff.

The Luigi Vein high-grade footprint currently measures approximately 300 metres long by a minimum of 75 metres high by 1.7 metres in average true width, with a weighted average grade of 2.84 gpt gold and 416.6 gpt silver, or 629 gpt AgEq. The Company plans to continue drilling on this vein for potential expansion as part of its Phase III drill program.

In addition to exploration work at Las Chispas, other recent activities in Mexico include the option of the Guadalupe concession located in the state of Durango to another company  and the purchase of the Cuestra Blanca Ranch (671.9 ha) in the Las Chispas Area. Through its Mexican subsidiary, SilverCrest now directly owns approximately two thirds of the surface rights over its Las Chispas mining concession.

SilverCrest is a Canadian precious metals exploration company headquartered in Vancouver, BC, that is focused on new discoveries, value-added acquisitions and targeting production in Mexico’s historic precious metal districts. The Company’s current focus is on the high-grade, historic Las Chispas mining district in Sonora, Mexico. SilverCrest is the first company to successfully drill-test the historic Las Chispas Project resulting in numerous discoveries. The Company is led by a proven management team in all aspects of the precious metal mining sector, including taking projects through discovery, finance, on time and on budget construction, and production.