SilverCrest Metals Inc. (TSX: SIL) (NYSE American: SILV) is pleased to announce in-fill and expansion drill results for the Babi Vista Vein in the Babicanora Area of the Las Chispas Project located in the state of Sonora, Mexico. The drilling announced today has nearly doubled the size of the high-grade footprint for the Babi Vista Vein since November 14, 2019 (see attached figures). These drill results show higher-grade vein mineralization to depth, including hole UBV19-30 with 2.1 metres (est. true width) grading 12,740 grams per tonne silver equivalent (“AgEq”; based on assumptions defined in the table below). The 22 in-fill and expansion drill holes in the high-grade footprint released today are in addition to 14 drill holes in the Babi Vista Vein high-grade footprint previously announced on February 25, 2019 and November 14, 2019. Based on these 36 drill holes, the updated high-grade footprint is approximately 400 metres along vein strike by 150 metres in height, and open along strike, towards surface and at depth. Within this footprint, the estimated average true width and grade of the vein is 1.2 metres grading 16.18 gpt gold and 1,272.9 gpt silver, or 2,486 gpt AgEq. This average grade of AgEq is 230% higher than the previous estimate of 753 gpt AgEq (at 2.2 metres grading 4.70 gpt Au and 401.1 gpt Ag), with a reduction in estimated average vein width of 45% (see news release from November 14, 2019).

Drill results from Las Chispas, received after March 1, 2020, will not be included in the ongoing Feasibility Study (“FS”). Results received for hole BV20-30 with 0.4 metres grading 79.00 gpt Au and 5,102.0 gpt Ag, or 11,027 gpt AgEq (see table below) is the first hole announced that will not be used in the FS resource estimation. There are still over 400 drill holes remaining to be reported for results to be included in the resource estimation for the ongoing FS. These results will be released as compilation is completed over the next few months and will include new vein discoveries, in-fill drilling for the Babicanora and Babicanora Footwall veins, in-fill and expansion drilling for the Babi Sur Vein, and in-fill and expansion drilling for the Las Chispas and Giovanni veins including Area 118 zone.”

Note: All numbers are rounded. Based on a cutoff grade of 150 gpt AgEq, except for UBV19-13 which is less than 150gpt AgEq but inside the high-grade footprint.
* AgEq based on 75 (Ag):1 (Au) calculated using long-term silver and gold prices of US$17 per ounce silver and US$1,225 per ounce gold, with average metallurgical recoveries of 90% silver and 95% gold.
** UBV defines underground drill hole.
*** drill hole est. true width was re-interpreted from previous estimate. See news release dated November 14, 2019.

Unnamed and new vein intercepts are located in the hanging and footwalls of the Babi Vista and Babicanora Norte veins and add to the potential for further high-grade discoveries to be announced in the future.

There are currently 12 core drills operating at Las Chispas, reduced from 19 drills operating in January 2020. The reduction of seven exploration drills in the Las Chispas area was to allow for further compilation and re-interpretation work before continuing expansion drilling in this area. Of the 12 rigs operating, 11 surface and one underground, 10 rigs are completing expansion holes in the Babicanora Area on known and new veins, and two rigs are still working on known vein targets for the Las Chispas Area. Approximately 150 expansion holes for 35,000 to 45,000 metres remain to be completed in H1, 2020. Updated resource and maiden reserve estimates, including Babi Vista, are anticipated in the summer of 2020, along with the ongoing feasibility study.

SilverCrest is a Canadian precious metals exploration company headquartered in Vancouver, BC, that is focused on new discoveries, value-added acquisitions and targeting production in Mexico’s historic precious metal districts. The Company’s current focus is on the high-grade, historic Las Chispas mining district in Sonora, Mexico. The Las Chispas Project consists of 28 100%-owned mineral concessions where all of the resources are located. SilverCrest is the first company to successfully drill-test the historic Las Chispas Project, resulting in numerous discoveries that are being evaluated for economic viability and potential production in the future. The Company is led by a proven management team in all aspects of the precious metal mining sector, including taking projects through discovery, finance, on time and on budget construction, and production. 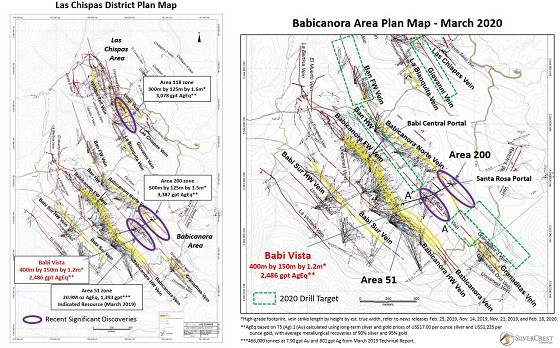 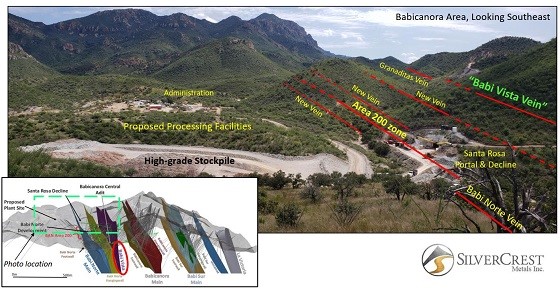 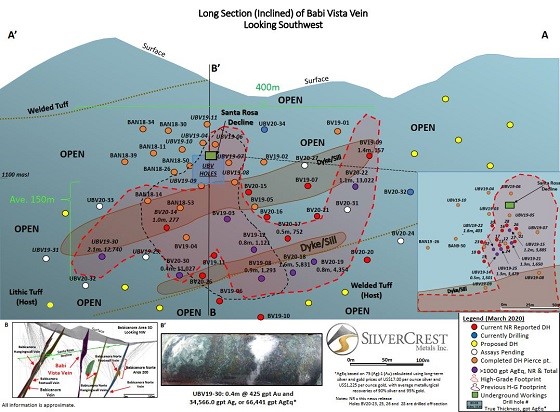