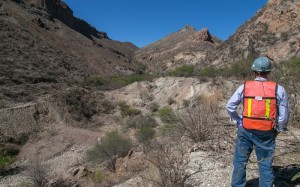 SilverCrest Metals Inc. (TSX-V: SIL) is pleased to announce the results of the remaining drill holes from Phase I drilling for the Las Chispas Project. The Las Chispas Project is located in Sonora State, Mexico and is in a historic silver-gold mining district which presently hosts two nearby precious metal producers. Historic information indicates that of the fourteen historically reported veins at Las Chispas, only three veins, the Las Chispas, William Tell and Babicanora, had documented production, which occurred between 1880 and 1930. SilverCrest’s initial focus is on these three veins. To the Company’s knowledge, none of the known veins have been drilled prior to the Company’s Phase I drill campaign. For more information, please refer to our website at www.silvercrestmetals.com.

Dunham Craig, P.Geo., Interim CEO remarked, “The remaining drill hole results from the Phase I drill program intercepted the Las Chispas vein which has further demonstrated continuity of high grades and potential mineable thicknesses. Phase II exploration work will continue to define the Las Chispas vein for resource estimation expected in H1 2017. As we continue to systematically explore this district-wide discovery with multiple undrilled epithermal veins, we could potentially have several more discoveries. The Babicanora area (no previous drilling), immediately adjacent to Las Chispas and William Tell veins, is considered the largest target in the district and will be tested in Phase II exploration.”

All assays were completed by ALS Chemex in Hermosillo, Mexico, and North Vancouver, BC.

Deeper vein intercepts into the Las Chispas vein, including holes LC16-12, 13, 14 and 15, intercepted quartz veining and stockwork. Grades for those intercepts were below 150 gpt AgEq. Further work is required to depth to better understand the precious metal zone below 300 metres from surface. Drill-intercepted mineralization at Las Chispas vein currently suggests a precious metal zone of at least 300 metres in depth.

The first NI43-101 technical report (non-resource) is currently being completed and should be available in Q4 2016. Based on the recent success of the Las Chispas Phase I program and subsequent announced discoveries, the Company is targeting a first resource estimation to be announced in H1 2017 along with a 100,000 tonne bulk sampling plan to form the basis for a preliminary economic assessment.

The Company is completing final permitting for the Phase II exploration program. Work is anticipated to commence in Q4 2016.

SilverCrest is a Canadian precious metals exploration company headquartered in Vancouver, BC, that is focused on new discoveries, value-added acquisitions and targeting production in Mexico’s historic precious metal districts. The Company is led by a proven management team in all aspects of the precious metal mining sector, including the pioneering of a responsible “phased approach” business model taking projects through discovery, finance, on time and on budget construction, and production with subsequent increased value to shareholders.