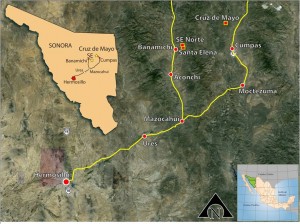 SilverCrest Mines Inc. (TSX VENTURE:SVL)(NYSE MKT:SVLC) is pleased to announce production numbers for the second quarter of 2013 from its 100% owned Santa Elena Mine located in Sonora, Mexico.

J. Scott Drever, Chairman and CEO stated; “We are pleased with production results for the second quarter which tracked well to budget. For the first six months of 2013, silver production was 347,503 ounces (11% above budget) and gold production was 14,688 ounces (11% below budget). We are starting to mine the planned higher ore grades from open pit so anticipate increased ounces produced in the second half of 2013. Based on continually exceeding forecasted silver ounces produced each month, we are increasing our annual silver production guidance from 625,000 ounces to 675,000 ounces. We are maintaining our annual gold production guidance of 33,000 ounces for 2013”.

Management has responded to the recent sharp decline in metal prices by re-enforcing ongoing disciplined cost and capital reduction measures to maintain 2013 cash cost at or below US$8.50 per silver equivalent ounce enabling the Company to complete all major capital expenditures associated with the Santa Elena Expansion.

The Company plans to issue its second quarter financial results on Wednesday, August 14, 2013.

The Qualified Person under NI 43-101 for this News Release is N. Eric Fier, CPG, P.Eng, President and Chief Operating Officer for SilverCrest Mines Inc., who has reviewed and approved its contents.

SilverCrest Mines Inc. is a Canadian precious metals producer headquartered in Vancouver, BC. SilverCrest’s flagship property is the 100%-owned Santa Elena Mine, located 150 km northeast of Hermosillo, near Banamichi in the State of Sonora, Mexico. The mine is a high-grade, epithermal silver and gold producer, with an estimated life of mine cash cost of US$8 per ounce of silver equivalent (55:1 Ag: Au). SilverCrest anticipates that the 2,500 tonnes per day open pit heap leach facility at the Santa Elena mine should recover approximately 625,000 ounces of silver and 33,000 ounces of gold in 2013. Major expansion and construction of a 3000 tonnes per day conventional mill facility is underway to significantly increase metals production at the Santa Elena Mine (open pit and underground) by 2014. Exploration programs continue to make new discoveries at Santa Elena and also have rapidly advanced the definition of a large polymetallic deposit at the La Joya property in Durango State with stated resources nearing 200 million ounces of Ag equivalent