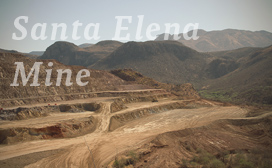 SilverCrest Mines Inc. (TSX-V: SVL)(NYSE MKT: SVLC) is pleased to announce production figures for the first quarter of 2013 from its 100% owned Santa Elena Mine located in Sonora, Mexico.

During Q1, 2013 the Company elected to accelerate waste removal (+19%) in advance of the hotter summer months when equipment availability and efficiencies have historically declined. The accelerated waste removal resulted in less ore processed   (-18%) and silver equivalent ounces produced (-5%) during the first quarter. This sets the stage for a significant reduction in strip ratios and more ore tonnes processed with higher metal production in the second half of 2013. The Company maintains its corporate market guidance of 625,000 ounces of silver and 33,000 ounces of gold for 2013.

J. Scott Drever, President stated; “Our decision to accelerate waste removal is consistent with our overall mine plan for 2013 operations. We are comfortable that as the ultimate strip ratio declines and the ore grades in the pit continue to increase we will meet our production and cost projections for the year. We expect the positive results of improvements in these two metrics to become apparent in the second half of 2013.

(1) Silver equivalence is based on market spot prices per ounce of silver and gold at the quarter end dates. All numbers are rounded.
(2) Average strip ratio for 2013, is projected at 2.7:1. Q1, 2013 strip ratio of 4.27:1 was higher than projected due to accelerating waste removal.

The Company plans to issue its first quarter financial results on Wednesday, May 15, 2013.
The Qualified Person under NI 43-101 for this News Release is N. Eric Fier, CPG, P.Eng, and Chief Operating Officer for SilverCrest Mines Inc., who has reviewed and approved its contents.

SilverCrest Mines Inc.is a Canadian precious metals producer headquartered in Vancouver, BC. SilverCrest’s flagship property is the 100%-owned Santa Elena Mine, located 150 km northeast of Hermosillo, near Banamichi in the State of Sonora, México. The mine is a high-grade, epithermal gold and silver producer, with an estimated life of mine cash cost of US$8 per ounce of silver equivalent (55:1 Ag: Au). SilverCrest anticipates that the 2,500 tonnes per day open pit heap leach facility at the Santa Elena mine should recover approximately 625,000 ounces of silver and 33,000 ounces of gold in 2013. An expansion plan is well underway to nearly double the annual metals production in 2014 at the Santa Elena Mine (open pit and underground). Exploration programs have rapidly advanced the definition of a large polymetallic deposit at the La Joya property in Durango State with stated resources nearing 200 million ounces of Ag equivalent.