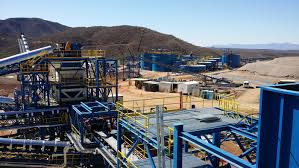 SilverCrest Mines Inc. (TSX:SVL) (NYSE MKT:SVLC) is pleased to announce that the new 3,000 tonne- per-day (“tpd”) mill and facilities (CCD-Merrill Crowe recovery) at its 100% owned Santa Elena Mine has been successfully commissioned. The commissioning period began in early May, 2014, and planned for 3 months of ramp-up, which was completed as of August 1, 2014. The Santa Elena Mine is currently transitioning from an open pit heap leach operation to a conventional 3,000 tpd conventional mill facility and underground operation. For additional information and to view photos and videos, please visit the Company’s website at www.silvercrestmines.com.

N. Eric Fier, President and COO stated; “The announcement of commissioning completion for the new Santa Elena mill and facilities is another major milestone achieved as SilverCrest continues systematic and responsible growth. Our dedicated construction, commissioning and operating teams should be congratulated on their continued efforts toward achieving targets under strict schedules and cash control protocols. We will continue to adjust and optimize all the components of the facilities in efforts to achieve through-put tonnages at or above the nameplate capacity of 3,000 tpd. Our near term focus now turns to achieving further milestones, including underground stope production in August and free cash flow in Q3, 2014.”

For 30 continuous days through to early August, 2014, the mill through-put ranged from 1,485 to 3,144 tpd and achieved an average of 2,524 tpd or 84% of the 3,000 tpd nameplate capacity. In July, 1,516 ounces of gold and 81,818 ounces of silver (excluding residual leached ounces from pad production) were produced and which exceeded budgeted production of 1,255 ounces of gold and 74,325 ounces of silver. Startup recoveries of gold and silver in July were 82% and 65%, respectively, compared to budgeted start up recoveries of 83% and 62%. All of the above commissioning criteria have been met to the satisfaction of management.

As planned, the mill feed during the commissioning period came from the leach pad reserve (pad ore). Blending of higher grade underground ore is expected to commence during Q3, 2014. Approximately, 69,000 tonnes of pad ore that was milled in July graded 0.84 gpt Au and 56.80 gpt Ag, which are approximately 33% higher for gold and 58% higher for silver than budgeted grades of 0.63 gpt Au and 36.0 gpt Ag.

Underground stope production is the next milestone in the transition plan at Santa Elena. Production from the first underground stope is planned for August. This initial stope will be mined using standard long hole stoping methods. As of July 31, approximately 32,225 tonnes of underground development ore have been stockpiled for mill processing in Q3, 2014. The average stockpile grade is 1.63 gpt Au and 118.91 gpt Ag, which is consistent with current reserve models.

SilverCrest Mines Inc. is a Canadian precious metals producer headquartered in Vancouver, BC. SilverCrest’s flagship property is the 100%-owned Santa Elena Mine, located 150 km northeast of Hermosillo, near Banamichi in the State of Sonora, Mexico. The mine is a high-grade, epithermal silver and gold producer, with an estimated life of mine of 8 years and average operating cash costs of $11 per ounce of silver equivalent (55:1 Ag:Au). SilverCrest anticipates that the new 3,000 tonnes per day conventional mill facility at the Santa Elena Mine should recover 1.5 million ounces of silver and 32,800 ounces of gold per annum over the current reserve life. Major expansion and commissioning of the 3,000 tonnes per day conventional mill facility is complete and is expected to significantly increase metals production at the Santa Elena Mine in 2014 and beyond. Exploration programs continue to make new discoveries at Santa Elena and also have rapidly advanced the definition of a large polymetallic deposit at the La Joya property in Durango State, Mexico.