SilverCrest Metals Inc. (TSX-V: SIL) (NYSE American: SILV) is pleased to announce initial in-fill and additional expansion drill results from the Babi Sur Vein of the Las Chispas Project located in the state of Sonora, Mexico. In-fill drilling has increased the confidence of resources and high-grade continuity in the vein. Expansion drilling has increased the high-grade footprint for possible additional resources (see attached Figures). The 33 drill holes released today (23 in-fill and 10 expansion) are in addition to the 39 drill holes previously announced on February 14, 2019, and used in the technical report titled “Technical Report and Preliminary Economic Assessment for the Las Chispas Property, Sonora, Mexico”, dated effective May 15, 2019, as amended July 19, 2019. The PEA is available on SEDAR (www.sedar.com) and the Company’s website (www.silvercrestmetals.com).

The Babi Sur Vein, as defined in the PEA includes 39 drill holes, and has a modelled average vein width (true) of 0.95 metres and cut diluted grade of 4.10 grams per tonne (“gpt”) gold and 268 gpt silver, or 575 gpt silver equivalent (“AgEq”, based on assumptions defined in table below) over a discontinuous (4 discrete zones) mineralized length of 1,200 metres (see attached Figures). The Babi Sur drill holes announced in this release have a weighted average true width of 2.3 metres grading 3.36 gpt Au and 282.5 gpt Ag, or 534 gpt AgEq (uncut) with hole intercepts distributed along the same estimated mineralized length as presented in the PEA. These new drill results suggest an increase in true width of between 1 to 2 metres, from 0.95 metres, and confirm the estimated overall grade of 534 to 575 gpt AgEq. In-fill drilling is also suggesting better continuity between the discrete zones delineated in the most recent resource estimate, with potential to reduce the required underground development to access these areas of the vein. In addition, drilling has established further high-grade mineralization intersected to depth and down plunge. While drilling the Babi Sur Vein, the Babi Sur HW Vein was intercepted along with other unknown vein intercepts, with the results presented in the tables below.

Note: all numbers are rounded. Based on a cutoff grade of 150 gpt AgEq with no minimum width.

* AgEq based on 75 (Ag):1 (Au) calculated using long-term silver and gold prices of US$17 per ounce silver and US$1,225 per ounce gold, with average metallurgical recoveries of 90% silver and 95% gold.

The Babi Sur Vein and Babi Sur HW Vein are still open to depth and down plunge to the southeast. Unnamed veins are under review for possible continuity and announcement(s) of additional vein discoveries. Approximately 25 to 35 additional in-fill and expansion holes, for a minimum of 7,000 metres, are planned for the Babi Sur Veins in H2, 2019.

SilverCrest is a Canadian precious metals exploration company headquartered in Vancouver, BC, that is focused on new discoveries, value-added acquisitions and targeting production in Mexico’s historic precious metal districts. The Company’s current focus is on the high-grade, historic Las Chispas mining district in Sonora, Mexico. The Las Chispas Project consists of 28 mineral concessions, of which the Company has 100% ownership of where all the resources are located. SilverCrest is the first company to successfully drill-test the historic Las Chispas Project resulting in numerous discoveries that are being evaluated for economic viability and potential production in the future. The Company is led by a proven management team in all aspects of the precious metal mining sector, including taking projects through discovery, finance, on time and on budget construction, and production. 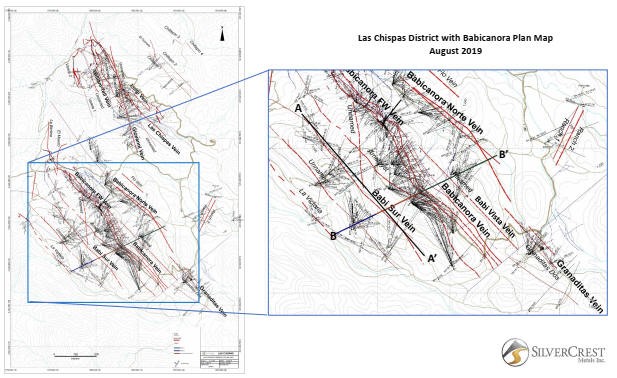 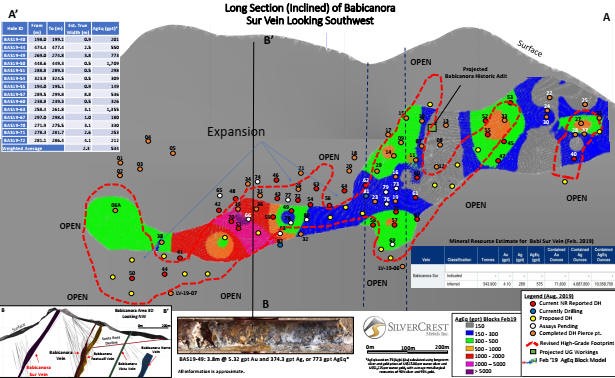