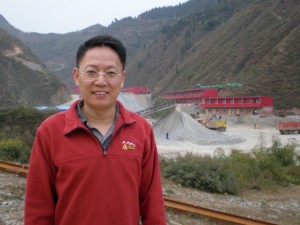 Highlights of selected intercepts and discoveries:

The purpose of the 2012 GC project surface and underground drilling program was to upgrade the classification of the known resource blocks and further define and extend known vein structures in preparation for mining in 2013.

Using two underground drill rigs to achieve a drill spacing of approximately 25m by 25m, drilling of V2 was focused on an area 300m in length from mine section lines 10 through 30 and 150m in vertical depth from the 100m elevation down to the -75m elevation. Access to V2 at the 20m elevation was gained via the main ramp and existing cross-cuts. In March 2013 Silvercorp expects to have an additional access point to V2 when the exploration ramp reaches the -50 m elevation. Present drill results (as evidenced by drill hole CK2102) indicate that V2 is a thick, continuous zone that would be amenable to bulk tonnage mining. In addition to its thickness, V2 also contains high-grade silver and tin mineralization. For example drill hole CK1831 intercepted 3.50m true width grading 460 g/t Ag, 1.20% Pb, 2.95% Zn and 0.86% Sn at the 39m elevation. As noted in the Company’s news release of November 19, 2012, the presence of tin is expected to enhance the economics of the GC project.

Drilling of the V9 vein group (V9, V9-1, V9W1 and V9W-2 veins) was conducted in an area 400m in length from mine section lines 14 through 32 and 150m in vertical depth between the 0m elevation and the 150m elevation using three underground drill rigs. Access to the V9 vein group was achieved via the exploration ramp with existing drifts and cross-cuts at elevations of 150m, 100m, 50m and 0m.

In addition to the V2 and the V9 vein groups, drilling has also further defined vein groups V5, V6, V8, V13, V14 and V15. Veins V25, V26, and V28 are new discoveries. Assay results have been received for 97 drill holes totaling 7,037m of drilling. Additional assays results for twelve holes are pending. In 2013, Silvercorp plans to continue with its infill and step-out drilling program at the GC project and currently has five underground drill rigs and two surface drill rigs on site.