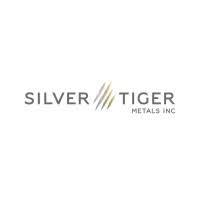 The current sampling program is intended to generate drill targets and returned multiple high-grade values including the following.

The silver equivalent ratios are based on a silver to gold price ratio of 75:1 (Ag:Au).

A location map is included below along with a table setting out the significant underground channel sample assay results. 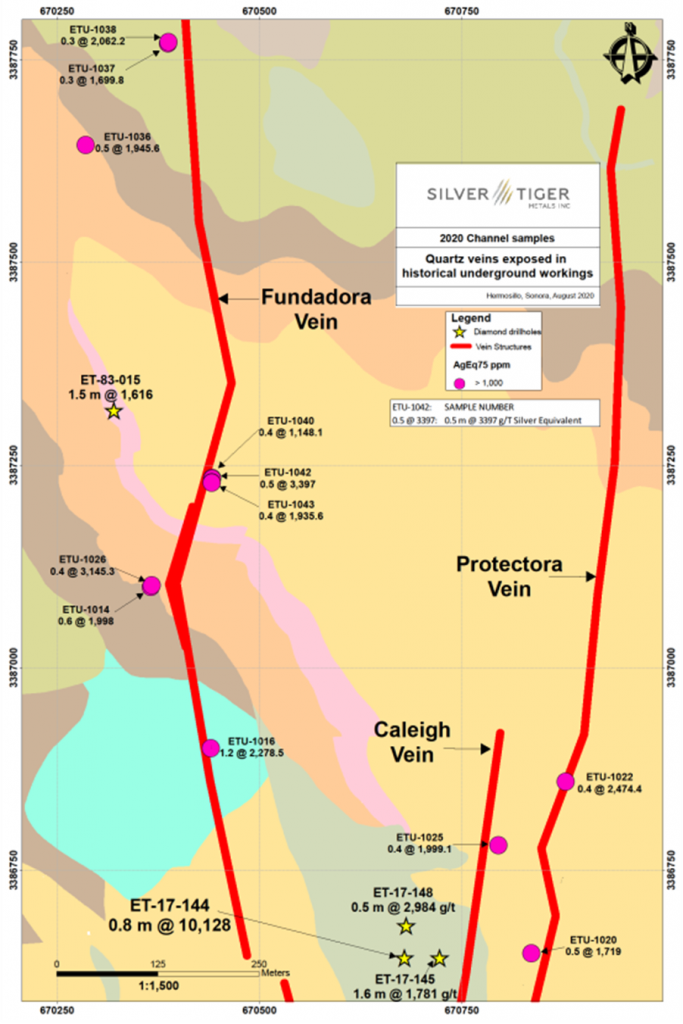 Note: Underground channel results are reported in silver equivalent based on silver to gold price ratio of 75:1 (Ag:Au).

Silver Tiger CEO, Glenn Jessome states, “These underground channel samples in the Fundadora, Protectora, Caleigh and Aquilas Norte veins confirm high grade silver values across kilometers of strike length in these vein extensions North of the historic El Tigre Mine. We look forward to beginning drilling on all of these veins at the end of August.”

Silver Tiger plans to commence drilling the high priority targets on the northern vein extensions in late August. Drill pads are currently being prepared for this drilling program.

Silver Tiger’s limited drilling in the vein extensions located north of the historic El Tigre Mine intersected similar-style silver-gold mineralization in the El Tigre formation including a new discovery – the Caleigh Vein. Drill hole ET-17-144 returned 0.85 meters of the Caleigh Vein grading 10,128.9 g/t silver equivalent consisting of 7,338.9 g/t silver, 37.2 g/t gold as well as 2.84% copper, 1.38% lead and 4.06% zinc. The silver equivalent ratio is based on a silver to gold price ratio of 75:1 (Ag:Au) and does not include the copper, lead and zinc values. As well, drill holes ET-17-145 and ET-17-148, which were some the last holes drilled by the Company, intersected similar-style silver-gold mineralization. The significant intercepts from these three drill holes are included in the following table.

Refer to the location map above for the approximate location of these drill holes.

About the El Tigre Property

The El Tigre Property lies at the northern end of the Sierra Madre gold belt which hosts many epithermal gold and silver deposits including Dolores, Santa Elena and Chispas at the northern end. In 1896, gold was first discovered on the property in the Gold Hill area and mining started with the Brown Shaft in 1903. The focus soon changed to mining high-grade silver veins in the area with much of the production coming from the El Tigre vein. Underground mining on the El Tigre vein extended 1,450 meters along strike and mined on 14 levels to a depth of 450 meters. By the time the mine closed in 1938, it is reported to have produced a total of 353,000 ounces of gold and 67.4 million ounces of silver from 1.87 million tons (Craig, 2012).

Silver Tiger’s district scale El Tigre Property is approximately 35 kilometers long and comprises 28,414 hectares and includes 25 kilometers of the prolific Sierra Madre trend. The El Tigre gold and silver deposit is related to a series of high-grade epithermal veins controlled by a north-south trending structure cutting across the andesitic and rhyolitic tuffs of the Sierra Madre Volcanic Complex within a broad gold and silver mineralized prophylitic alternation zone. The veins dip steeply to the west and are typically 1 meter wide but locally can be up to 5 meters in width. The veins, structures and mineralized zones outcrop on surface and have been traced for 5.3 kilometers along strike. Historical mining and exploration activities focused on a 1.5 kilometer portion of the southern end of the deposits, principally on the El Tigre, Seitz Kelly and Sooy veins. The unexplored Caleigh, Fundadora and Protectora exposed veins continue north for more than 3 kilometers and will be the target of Silver Tiger’s exploration.

The sealed and tagged sample bags are transported to the Bureau Veritas facility in Hermosillo, Mexico. Bureau Veritas crushes the samples and prepares 200-300 gram pulp samples with ninety percent passing Tyler 150 mesh (106μm). The pulps are assayed for gold using a 50 gram charge by fire assay (Code FA430) and over limits greater than 10 grams per tonne are re-assayed using a gravimetric finish (Code FA530).

Quality assurance and quality control procedures monitor the chain-of-custody of the samples and includes the systematic insertion and monitoring of appropriate reference materials (certified standards, blanks and duplicates) into the sample strings. The results of the assaying of the QA/QC material included in each batch are tracked to ensure the integrity of the assay data. All results stated in this announcement have passed Silver Tiger’s QA/QC protocols.

David R. Duncan, P. Geo., V.P. Exploration of the Corporation, is the Qualified Person for Silver Tiger as defined under National Instrument 43-101. Mr. Duncan has reviewed and approved the scientific and technical information in this press release and has reviewed the Technical Report.