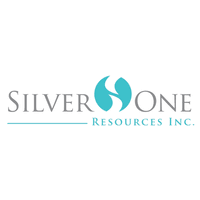 Silver One Resources Inc. (TSX-V: SVE) (OTCQX: SLVRF) (FSE: BRK1) is pleased to report results of the last 22 drill holes from its 52-hole, 15,000-meter, reverse circulation and diamond drilling program completed at its Candelaria project, Nevada.  The three main objectives of the program, which included the outlining of deep, higher-grade silver and gold mineralization down-dip from the previously mined open-pits, extending near-surface, potentially open-pit mineralization to the east of west of the previously mined areas, and examining potential for porphyry related mineralization at depth, were all successfully achieved.

Previous results of this program were released on February 16, and May 26, 2021.  Recent assays received continue to confirm the presence of down-dip, higher-grade silver mineralization north of Mount Diablo pit and between Northern Belle and Mount Diablo pits.  Similarly, drilling immediately east and west of the Mount Diablo pit reports significant widths of mineralized intervals with silver averages exceeding historic cut-off grades.  This confirms the continuity of robust near surface silver-oxide mineralization along-strike for at least 500m west and 100m east of the Diablo pit.  The mineralized system remains open along-strike in both directions.  Additionally, indications of porphyry style alteration and mineralization have been identified in felsic dykes and altered intrusives with deep, drill intercepted gold mineralization associated with porphyry style alteration returning 5.99gm/t gold over 0.67m in hole 81 located west of the Northern Belle open-pit.

Silver One’s President and CEO, Greg Crowe, commented: “We are extremely pleased with the results of the 15,000 meters drill program, as all goals laid out at the outset have been met.  Drill hole assays to the east and west of the Diablo pit not only demonstrate the continuity of near-surface silver-oxide mineralization, but grades are above the cut-off grade of the historic mining, suggesting that the areas drilled may potentially be amenable to open pit mining.  This bodes well with the prospect of reprocessing historic heap-leach material by mixing it with fresh mineralization and potentially increasing the overall grade and silver recoveries.   Metallurgical work is ongoing.

Additionally, hydrothermal alteration and gold mineralization found in a diorite porphyry at the bottom of hole 81 suggests proximity to a potential porphyry/skarn system.  This mineralized system was first identified in historic adit dumps, which returned assays to 2.76% copper, 25 g/t silver and 0.67 g/t gold (see Figure 3A and News Release Oct 15, 2020).  Drill targets were subsequently delineated by Silver One’s 2019 airborne magnetic survey followed by an IP survey.   The possibility of a porphyry related mineralized system below the extensive area of nearer surface silver-oxide mineralization adds an entirely new and exciting aspect to what is already a robust project at Candelaria.”

Drill collars are shown in Figure 1 and Figure 2.  Gold and silver assays are set out in Table 1 and coordinates and identification drill hole data are in Table 2 at the end of this release.

Results from the 15,000 meter drill program along with ongoing metallurgical testing will be important in the preparation of an economic study planned for year-end, 2021.

An additional phase of drilling is planned for Q4 2021.  This will serve to test the near-surface, along-strike extensions still farther away from the pits and to investigate new targets identified from recent surface sampling programs.   The investigation of potential porphyry/skarn mineralization will also be pursued.

Sulphide veinlets with gold mineralization intersected within a potasically altered diorite with secondary biotite (Figure 3B) and magnetite veinlets in hole 81 suggest the proximity to a potentially mineralized porphyry/skarn system in the vicinity of the Candelaria project.

Hole 81, collared just north of the Georgine Pit (Figure 2), exhibits over 300 meters of moderate to strong hydrothermal alteration from the base of Tertiary to Quaternary volcanic rocks at 647.7 meters to the bottom of the hole at 989.88 meters.   Alteration proceeds downhole from nearer surface propylitic alteration though quartz-sericite alteration and then into 80 plus meters of a diorite porphyry with potassic alteration, biotite-magnetite micro-veinlets +/- tourmaline and gold mineralization in massive sulfide veinlets near the base of the hole.  Here, a 60 cm sample from 928-meter depth assayed 5.99 g/t gold within a 13.33 meter zone averaging 0.5 g/t.

Mineralization within the historic resource area between Mount Diablo and Northern Belle pits is also spatially related to multiple phases of altered dikes, especially felsic dikes with tourmaline alteration (Figure 3C).  This could also be an indication of a potential intrusive source to the mineralized systems.  Recent reconnaissance by Silver One geologists has identified favorable structures as well as similar alteration in felsic dikes both to the east and west of the pits, all within Silver One’s property.  These areas have been sampled and are awaiting lab assays.  Additional drilling targets will be ranked based on the above mentioned structure-alteration and mineralization features.

Metallurgical testing with samples from RC drilling will expand on work completed in 2019 by McClelland and KCA labs.  RC samples will be prepared based on geological and mineralogical domains to investigate potential silver recoveries of in-situ fresh mineralization.   Additional samples from historic heap-leach pads are in the lab for crushing and further metallurgical testing including roasting and cyanide leaching.

Silver One is focused on the exploration and development of quality silver projects.  The Company holds an option to acquire a 100%-interest in its flagship project, the past-producing Candelaria Mine located in Nevada.  Potential reprocessing of silver from the historic leach pads at Candelaria provides an opportunity for possible near-term production.  Additional opportunities lie in previously identified high-grade silver intercepts down-dip and potentially increasing the substantive silver mineralization along-strike from the two past-producing open pits.

The Company has staked 636 lode claims and entered into a Lease/Purchase Agreement to acquire five patented claims on its Cherokee project located in Lincoln County, Nevada, host to multiple silver-copper-gold vein systems, traced to date for over 11 km along-strike. 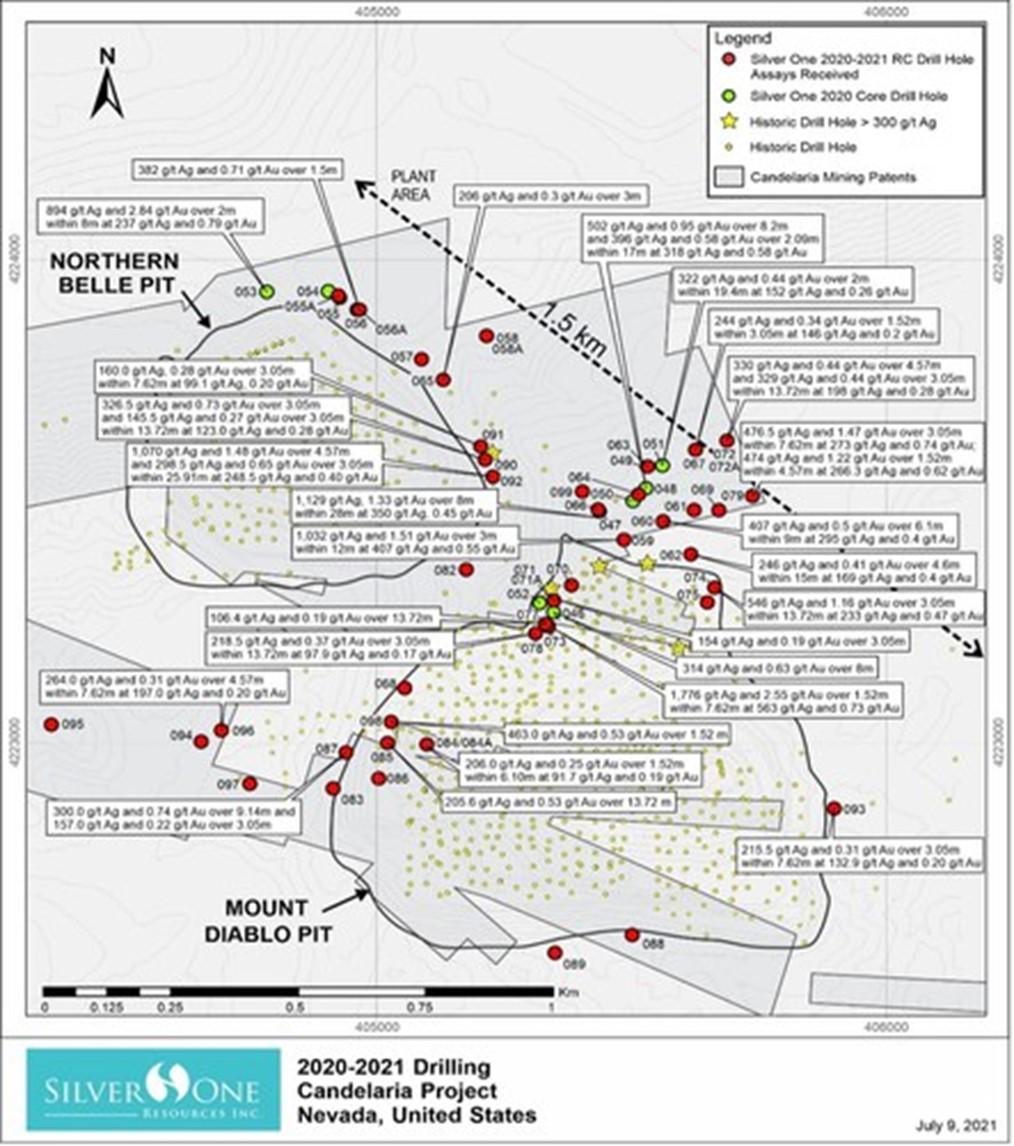 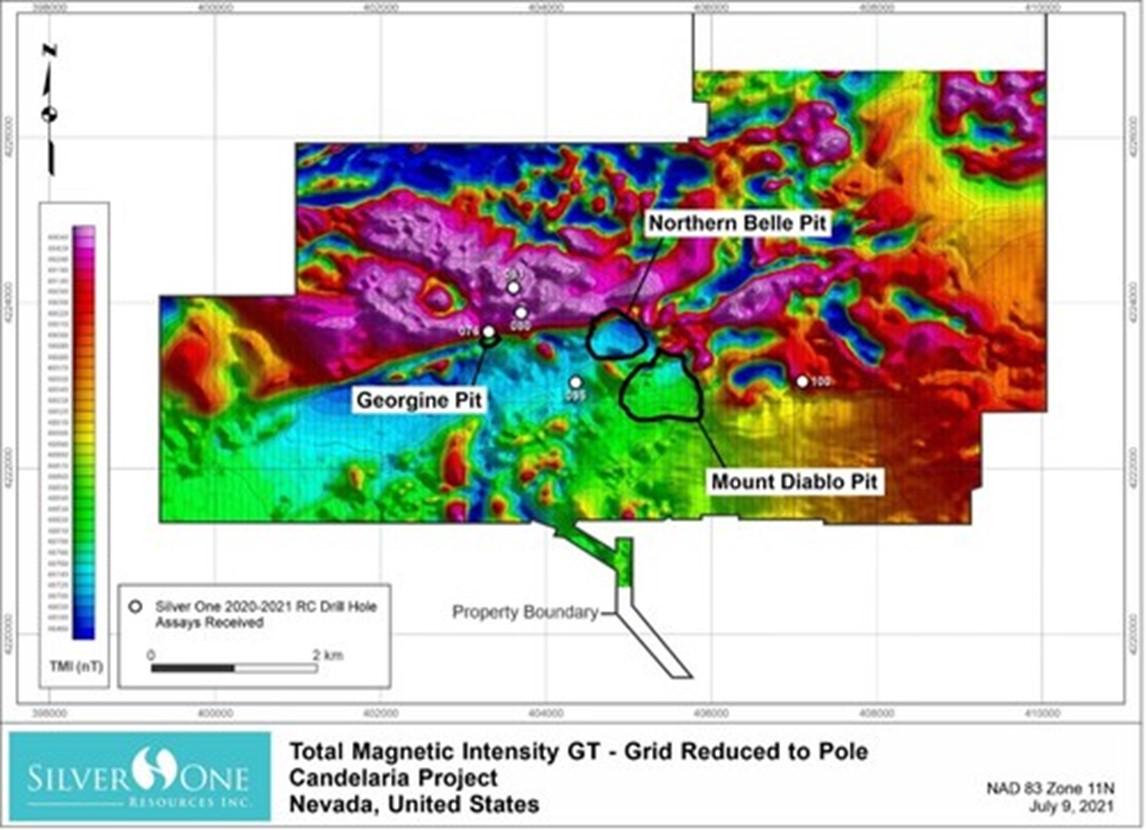 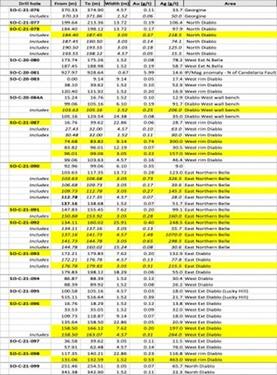 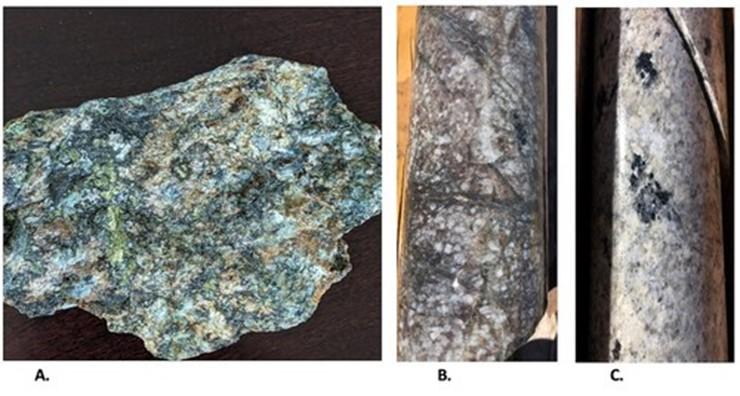 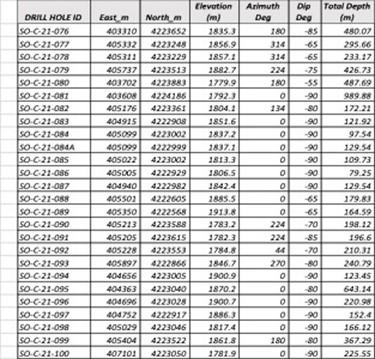