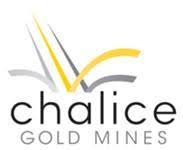 Chalice Gold Mines Limited (TSX:CXN) (ASX:CHN) is pleased to advise that it is making excellent progress with the expanded exploration program at its East Cadillac Gold Project, located in the Abitibi gold province in Quebec, Canada, with the receipt of a number of encouraging new assay results confirming and further expanding the potential of the project.

As announced on January 16, 2018, Chalice has increased its planned drilling program at East Cadillac to a planned 29,000m, representing an increase of 21,000m. Drilling activity has increased with four diamond rigs now operating.

The current diamond drill program was designed to follow-up on potential extensions to the mineralization previously intersected at Nordeau and Simon West and to complete an initial assessment of prioritised targets identified from both surface geochemistry and 3D Induced Polarisation surveys undertaken in 2017 (see Figure 1).

The latest assay results have confirmed the presence of significant gold mineralization at Simon West (ECG-18-21) and the continuation of multiple mineralized zones up to 10m in width (ECG-18-16 and 37) over a strike length of ~3.5km to the west of the Chimo Mine boundary. The mineralization is typical of the Abitibi region and is seen elsewhere along the Larder Lake – Cadillac Fault structure.

Chalice is also encouraged by results received from drilling on the Northern Contact, located ~1km north and parallel to the Larder Lake – Cadillac Fault, where drill hole ECG-18-24 intersected 6.5m at 1.77 g/t Au from 157m. This result warrants further testing of the Northern Contact (Figure 1).

The latest significant intercepts are listed below in Table 1 (full listing of intersections can be found in Appendix 1). Assays are continuing to be received from the laboratory, with only ~40% of the planned 29,000m program assayed to date.

Sampling Techniques– NQ Drill core samples were collected using a diamond drill rig. Core is cut in half using a saw and the half core is sent to the lab for analysis, with one half of the core retained in the core box. QA/QC procedures include one standard, one duplicate, and one blank sample within each 20 sample batch. Duplicate samples are core that has been cut in half, and then the half core cut in half once again, so that each duplicate represents one quarter of the core. NQ diamond core samples were analysed by ALS Chemex Laboratories. Gold is analysed using ALS Chemex’s Au-AA23 method, which is the analysis of a 30g crushed and homogenized sample using fire assay and atomic absorption. Any sample which registers a value of greater than 10 ppm Au is run again using the Au-GRA21, which analysis a 30g crushed and homogenized sample using fire assay with a gravimetric finish.

Mineralization is hosted in sheared and altered mafic volcanic rocks altered to a quartz-biotite+ sericite schist. Visible gold was observed in the interval and the gold is associated with trace to 15% by volume arsenopyrite. Three significantly mineralized zones were intersected in the hole (Figure 2), typical of the multiple parallel mineralized horizons seen at many of the deposits along the Larder Lake – Cadillac Fault.

The high-grade mineralization encountered in ECG-18-21 is interpreted to plunge steeply to the west, as seen at the Chimo Mine (Figure 3).

The structures hosting the mineralization at Simon West and the Chimo Mine have been intersected a further 2km west of Simon West, extending the known mineralization over ~3.5km of strike, comprised of a number of zones – which is considered to be an extremely encouraging result as it suggests a large scale plumbing system. An additional drill hole is planned to test the steep westerly plunge of high-grade mineralization intersected in ECG-18-21.

At Far Simon West, drill hole ECG-19-16 intersected two mineralized zones with the deeper zone returning a down-hole intercept of 10.8m at 0.99 g/t Au (Figure 4) and will be followed up with additional drilling.

Chalice is encouraged by the discovery of a new mineralized structure referred to as the Northern Contact, located approximately 1km north and running parallel to the Larder Lake – Cadillac Fault.

Drill-hole ECG-18-24 at the Northern Contact, which was designed to test a coincident soil and IP chargeability anomaly, intersected a mineralized structure positioned at the mafic volcanic and sediment contact (Figure 5). This is newly identified mineralized horizon within the project area which requires significant further work.

Commenting on the results, Chalice’s Managing Director, Mr Tim Goyder, said: “The intersections at the Simon West and Northern

Contact Targets are very encouraging and clearly show that we have identified a potentially large mineralized system at East Cadillac with significant potential notwithstanding we only have results for approximately 40% of the 29,000m program to date.

“Given that it is just 18 months since we first secured an initial interest in the East Cadillac Gold Project, we have made excellent progress and believe that we are now beginning to understand where the focus of the project lies from an exploration perspective. We are looking forward to completing the current 29,000m program and to receiving the remaining assay results.”

The East Cadillac Gold Project (“ECG Project”) covers an area of 145km2 and is located 35km east of the 20Moz Val-d’Or gold camp. With land holdings encompassing a strike length of 16km of the Larder Lake-Cadillac Fault – the most prolifically endowed gold trend in the southern Abitibi – the project is situated amongst some of the region’s most significant mines, and is adjacent to the historical Chimo gold mine (owned by “Cartier Resources Inc. (ECR.V)”).

The information in this news release that relates to Exploration Results in relation to the East Cadillac Gold Project is based on information compiled by Dr Kevin Frost BSc (Hons), PhD, who is a Member of the Australian Institute of Geoscientists. Dr Frost is a full-time employee of the company and has sufficient experience in the field of activity being reported to qualify as a Competent Person as defined in the 2012 edition of the Australasian Code for Reporting of Exploration Results, Minerals Resources and Ore Reserves, and is a Qualified Person under National Instrument 43-101 – ‘Standards of Disclosure for Mineral Projects’. The Qualified Person has verified the data disclosed in this release, including sampling, analytical and test data underlying the information contained in this release.  Dr Frost consents to the release of information in the form and context in which it appears here.