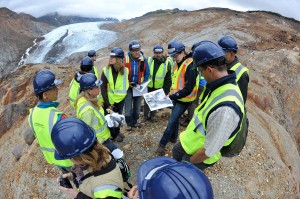 Seabridge Gold (TSX:SEA)(NYSE:SA) reported today that exploration drilling has begun at its KSM project in Northwestern British Columbia, Canada. Four highly prospective targets are likely to be tested this summer for their potential to host large deposits with grades at multiples of the project’s currently reported reserves.

The KSM Project contains one of the largest undeveloped gold and copper reserves in the world. Its composite intrusive complex hosts four large gold-copper porphyry deposits with direct genetic links to epithermal vein deposits including the neighboring Brucejack/Valley of the Kings occurrences owned by Pretium Resources. Three of this year’s targets are “core zone” deposits. In mining districts similar to KSM in size, with multiple magma sources and comparable genetic/deformational histories such as Oyu Tolgoi, Pebble, Resolution, and Grasberg, major new discoveries have been made late in the exploration history, often below shallow porphyry deposits and/or beneath faults. The fourth target for this year is a potentially fully preserved down thrown block of epithermal-style gold and silver occurrence similar to Brucejack/Valley of the Kings.

Chairman and CEO Rudi Fronk noted that “our team has never been more excited to begin an exploration program. The insights for these targets have emerged over several years but they have been deferred while we drilled off the known deposits in order to establish reserves and proceed with permitting. We are finally getting back to the kind of exploration which has the potential to add significant shareholder value, even under the current poor market conditions.”

The four targets in the 2013 program are:

Drilling below the Kerr deposit in 2012 confirmed the existence of higher grade core-zone-style mineralization and demonstrated strong potential for finding substantial tonnages of material exceeding the current Kerr reserve grades. Holes K-12-20 and K-12-21 intercepted multiple zones with much higher concentrations of gold and copper than the Kerr deposit average. Key observations of the Deep Kerr discovery are: strengthening intensity of alteration with depth; an increasing chalcopyrite-to-pyrite ratio; and gold and copper values increasing in tandem. The Deep Kerr opportunity is enhanced by its accessibility from the Sulphurets valley floor by way of an inclined tunnel, raising the potential for a lower cost block caving option which would also have significant environmental benefits.

The exploration of Deep Kerr will require long drill holes. To obtain maximum return on expenditures, tools including borehole geophysics, wedging, and directional steering will be employed in each hole. The first phase of exploration at Deep Kerr in 2013 will include drilling multiple intersections 300 to 400 meters down dip of the current resource at approximately 500 meters spacing. Once confirmation of the structure, alteration, and metal zoning geometries is in hand, optimization of higher density drilling required for resource definition will begin. The goal is to ensure that resource delineation drilling is focused on the area with potential for the most continuous and highest grades within the very large down dip projection of the Kerr Zone.

Drilling at the McQuillan target in 2012 confirmed the presence of a distinct gold-copper porphyry mineralization system southeast of, and below, the Sulphurets deposit. Magnetite-bearing potassic alteration and hydrothermal breccias with chalcopyrite and gold appear to indicate proximity to a possible core zone. A drill hole has been designed to be used as a “mother hole” from which additional “daughter holes” can be completed using directional drilling tools. The mother hole will be surveyed using multiple borehole geophysical tools to aid in identifying and locating magnetic and conductive sources associated with a core zone. McQuillan could be exploited underground via a decline from either the Mitchell or Sulphurets valleys without significant changes to the current mine design.

Deep drilling below the Iron Cap deposit in 2012 attempted to test the down plunge of the deposit for higher grade gold-copper core zone mineralization. The hole deviated substantially, and although it was mineralized for its entire length of 949.5 meters, this hole passed out of the plunge projection of the deposit and did not test the concept. Two off-set holes are planned to pursue the down plunge projection. Borehole geophysical tools are expected to help explore the potential at Iron Cap effectively. Both holes will utilize directional drilling tools to ensure correct hole alignment and provide opportunity for “daughter holes”. Iron Cap is currently designed as an underground block cave mine; extending the deposit down plunge should therefore result in little change to the KSM project design.

Discovered in 2012, the Camp Zone in the bottom of the Sulphurets Valley is interpreted as a preserved down thrown block of epithermal-style gold and silver occurrence. This target has similarities to Pretium’s neighboring Brucejack deposit. To date, drilling has been widely spaced (150 to 300 meters) with just 13 holes within an area of approximately 400 meters by 1200 meters and a vertical range of 600 meters. The drill results can be characterized in two ways. First, the drilling cut broad envelopes of disseminated mineralization such as 98.7 meters of 2.1g/T gold and 2.5g/T silver; 81.0 meters of 1.4g/T gold and 8.9g/T silver; and 39.2 meters of 2.2g/T gold and 10.6g/T silver. These widths could be amenable to bulk mining. Second, drilling intersected discrete higher grade veins including17 quartz-carbonate vein zones averaging 1.6 meters in thickness, many with visible gold, averaging 16.9g/T gold and 80.2 g/T silver. These widths and grades are more akin to the nearby Brucejack occurrence. Drill testing is designed to provide confirmation of the controlling structural geometry and continuity of higher grade mineralization.

Exploration activities at KSM are being conducted by Seabridge personnel under the supervision of William E. Threlkeld, Senior Vice President of Seabridge and a Qualified Person as defined by National Instrument 43-101. Mr. Threlkeld has reviewed and approved this news release. An ongoing and rigorous quality control/quality assurance protocol is being employed during the 2013 program including blank and reference standards in every batch of assays. Cross-check analyses are being conducted at a second external laboratory on 10% of the samples. Samples are being assayed using fire assay atomic adsorption methods for gold and total digestion ICP methods for other elements.