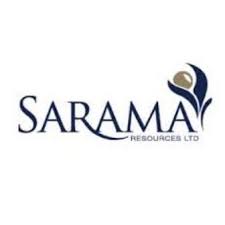 Drilling at the Kenobi Deposit intersected broad mineralisation in oxide material which has prompted a re-interpretation of gold-bearing lodes in the area to include several flat-lying zones, which are considered favourable for potential open pit mining.

With the recent increase in the strike length of drill-defined mineralisation at the Project to over 12km, these results are expected to refine the understanding of the oxide and free-milling components of the mineral resource base that currently totals approximately 600koz Au (oxide and transition) out of a total 2.1Moz Au mineral resource1. Sarama’s objective is to advance its southern Houndé Belt projects (refer Figure 1) toward a low capital, high-return development, initially exploiting the oxide and free-milling material as part of a multi-stage project.

“We are very pleased with these strong intersections in oxide material across several locations within the mineral resource. The drilling at the MM and MC Deposits confirms the continuity of higher-grade mineralisation and gives us confidence in this material which forms an important part of Sarama’s regional development.

The drilling at Kenobi has prompted a revised interpretation to feature flat-lying lodes and we are keen to examine the implications of this style of near-surface mineralisation across the broader Project.

We look forward to the upcoming exploration season where we intend to pursue additional targets generated in the most recent rounds of drilling, pushing ahead with existing exploration targets and importantly, growing the oxide mineral resource and getting more definition into our project development options.”

The recent drill program, consisting of 34 AC holes for a total of 1,600m, was designed to confirm the tenor and continuity of near-surface, higher-grade mineralisation within the current mineral resource at the MM and MC Deposits and to test for near-surface, flat-lying mineralisation at the Kenobi Deposit (refer Figure 2). These areas are important parts of the mineral resource and are anticipated to provide early feed in the regional development plans contemplated by Sarama.

Drilling at the MM and MC Deposits primarily focussed on higher-grade zones within the existing mineral resource, but also tested for extensions to interpreted mineralisation.

The intersection in hole TAA130 has been interpreted to intersect mineralisation of multiple geometries adjacent to one another. One of these lodes is thought to be oriented sub-parallel to the trajectory of the drill hole, which in part, produces the long downhole intersection length. This hole and adjacent drilling suggest upside exists to the inventory of higher-grade oxide mineralisation, present as unmodelled intersections and potential thickened zones and/or additional parallel lodes which will require further drilling to properly understand.

Previous interpretations of mineralisation in the central part of the Kenobi Deposit presented a series of steeply-dipping parallel lodes striking in a north-north-easterly direction, consistent with the geometry of other lodes within, and the trend of, the larger mineralised system. The intersection of broad, higher-grade oxide mineralisation in recent drilling in three fences over a strike length of approximately 200m has prompted a revision to the interpretation in this immediate area.

The original steeply-dipping lode interpretation remains valid but now appears to be complimented by a series of flat-lying mineralised zones which are present in the oxide horizon, striking NNE and dipping gently to the east (refer Figure 3). The flat-lying lodes appear to ‘overprint’ the more steeply dipping lodes and importantly, exhibit higher grades in an ‘enriched’ zone. The Company considers this a favourable development in the understanding of the mineral resource and would expect to see an increase in the material available for mining by open pit compared to the original interpretation.

The presence of flat to gently-dipping, extensional structures that cut steeply into sub-vertical dipping stratigraphy is common in many known gold deposits in the region and this orientation has recently been recognised at the Kari Pump Prospect, Houndé Mine (refer Endeavour Mining news release of November 15, 2018). Recently interpreted flat-dipping mineralisation in several areas at the South Houndé Project is potentially related to zones of structural weakness and enhanced fluid permeability and these areas are considered to be highly prospective and warrant follow-up.

Future exploration on the Project will continue to be oriented towards oxide and free-milling targets within the main mineralised corridor. The recent drilling in the south of the Project at the Obi, Djimbake and Kenobi Prospects (refer News Release August 21, 2019) has yielded encouraging results and has also delivered several new targets for future investigation and there are still numerous promising targets within the better drilled MM and MC Deposits which have potential to make valuable additions to the 600koz Au oxide and free-milling component of the current 2.1Moz Au mineral resource1.

In parallel with the activity in the main mineralised corridor of the South Houndé Project, the Company has been developing additional targets for testing within the ThreeBee Project4, to the immediate north, which forms part of Sarama’s regional development plans. 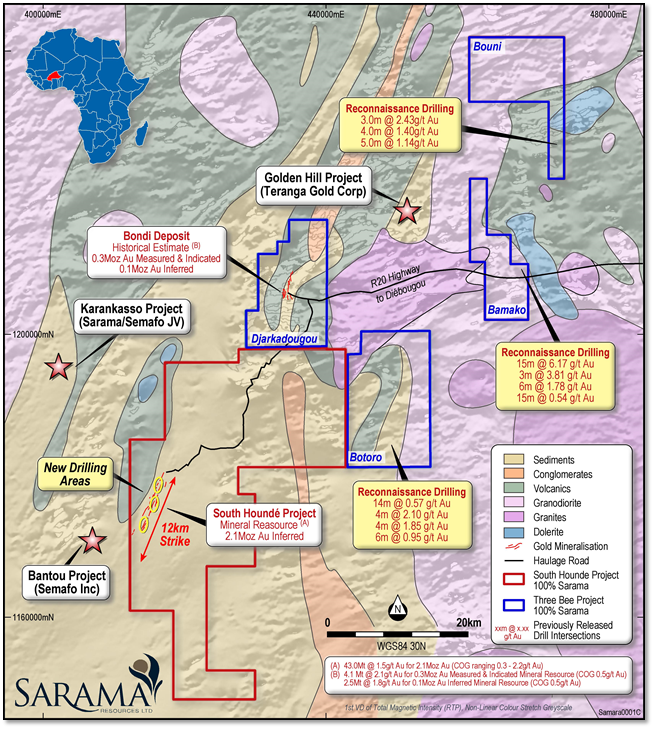 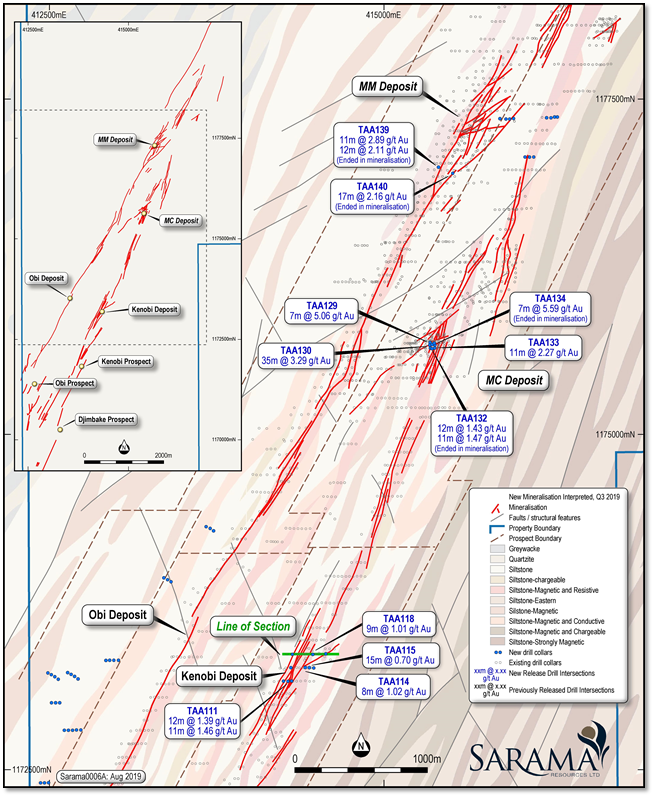 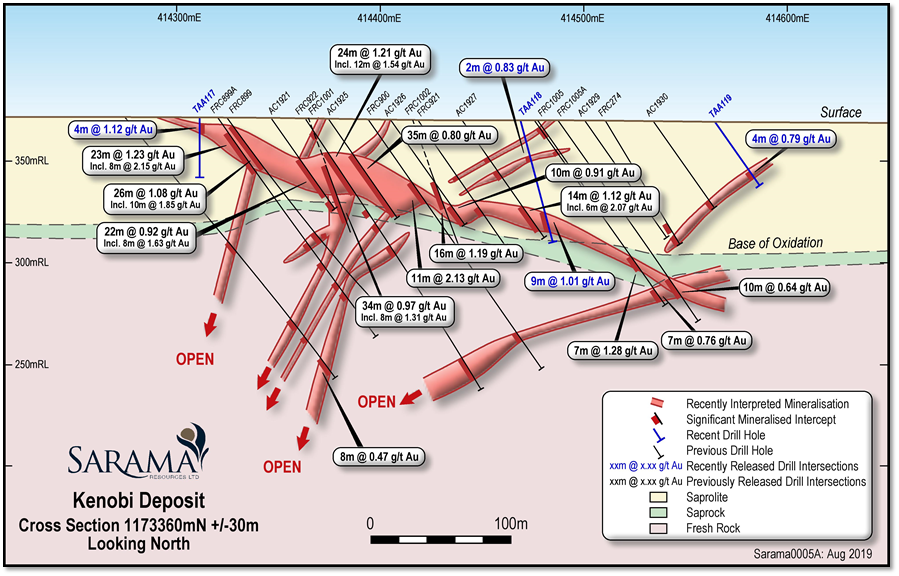 Sarama’s South Houndé and ThreeBee Projects, in which the Company has the ability to hold a 100% interest4,6, are located within the prolific Houndé Greenstone Belt in south-west Burkina Faso and are the exploration and development focus of the company. Its exploration programs have successfully discovered an inferred mineral resource estimate of 2.1Moz gold1 at the South Houndé Project which is complemented by the ThreeBee Project’s Bondi Deposit (historical estimate of mineral resources of 0.3Moz Au measured and indicated and 0.1Moz Au inferred2).

Together, the projects form a cluster of advanced gold deposits, within trucking distance of one another, which potentially offers a development option for a central processing facility in the southern Houndé Belt region of Burkina Faso, fed from multiple sources.

Sarama has also built a growth pipeline which features a new 600km² exploration position in the highly prospective Banfora Belt in south-western Burkina Faso. The Koumandara Project hosts several regional-scale structural features and trends of gold-in-soil anomalism extending for over 40km along strike.

Sarama holds approximately 22% participating interest in the Karankasso Project Joint Venture which is situated adjacent to the Company’s South Houndé Project in Burkina Faso and is a JV between Sarama and Semafo Inc. Semafo is the operator of the JV, having acquired the previous operator, Savary Gold Corp. In October 2015, Savary declared a maiden inferred mineral resource estimate of 671,000 ounces of contained gold3 at the Karankasso Project JV.

The Company’s Board and management team have a proven track record in Africa and a strong history in the discovery and development of large-scale gold deposits. Sarama is well positioned to build on its current success with a sound exploration strategy across its property portfolio.

iii. The historical estimate was informed by 886 drillholes, assayed for gold by cyanidation methods, were used to interpret mineralised envelopes and geological zones over the area of the historical estimate. Gold grade interpolation was undertaken using ID² methodology based on input parameters derived from geostatistical and geological analyses assessments. Field measurements and geological logging of drillholes were used to determine weathering boundaries and bulk densities for modelled blocks.