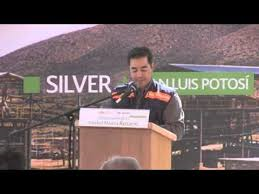 Santacruz Silver Mining Ltd. (TSX-V:SCZ) is pleased to announce the results of a Preliminary Economic Assessment and new resource estimate prepared pursuant to National Instrument 43-101 on its San Felipe Project located 130 km northeast of Hermosillo in Sonora State, Mexico. Highlights of the PEA, using a US$19.91 per ounce silver base case, include:

At a 150 g/t Ag equivalent cut-off, the new resource estimate for all veins is:

Santacruz President and Chief Executive Officer Arturo Préstamo stated, “This Preliminary Economic Assessment is excellent news for the Company and indicates that the San Felipe project has strong economic parameters and is potentially economically viable in the current market environment. The estimated CAPEX for the project is relatively low, and the property has significant exploration upside. The Company will be initiating the priority studies identified by the study team to de-risk the project immediately. These include completing more metallurgical work, initiating exploration drifting and trial mining to evaluate the continuity of higher grade mineralization and ground conditions for potential future mining.”

He continued, “The significant increase in resources in the recent estimate shows that the efforts of our exploration team are paying off. Some of the resource areas are still open and surface work over the last year has identified additional vein targets. The Company believes that, similar to many vein deposits, if a mine is developed on the current San Felipe resource there will be opportunities to identify new resources to keep the operation going for many years to come. With the PEA now complete, the Company will be initiating the recommended work program to bring the project towards pre-feasibility and will complete permitting for the proposed infrastructure. At the same time, the Company will continue to aggressively explore the rest of the property. In particular, the Company will focus on those areas already identified with high potential to further increase the resources on the San Felipe Project.”

The PEA models a combined open pit and underground mine and mill that produces both a lead and a zinc concentrate with the lead concentrate containing the payable silver values. Resources on four veins, Ventana, Las Lamas, San Felipe and Transversales are included in the analysis. In the model, the upper parts of the Ventana, San Felipe and Tranversales veins are mined by open-pit methods. Separate underground workings are developed to access the lower parts of the Ventana and San Felipe veins and the Las Lamas vein. Proposed mining is by contractor. Underground mining is modeled to be by long-hole sub-level retreat using diesel mobile equipment. Access to lower levels is by decline. Just over a year of pre-production construction would be required. The proposed 1,250 tonnes/day mill contains a crushing circuit, ball mill and flotation circuits. Concentrates will be sold and delivered to a smelter or concentrate trader.

A summary of the key parameters and conclusions of the PEA are given in the table below. The 100-day average as of September 4, 2014 was used as the base case metal price. The PEA is based on a stand-alone project and evaluates the potential economics from the start of construction. It does not incorporate costs before any production decision. The PEA and new resource estimate will be available on SEDAR within 45 days of this press release.

Note: These tables are in part based on inferred mineral resources which are considered too speculative geologically to have the economic considerations applied to them that would enable them to be categorized as mineral reserves.

*The after tax calculation considers the new Mexican tax regime including a 0.5% environmental fee for gold/silver/platinum, a 7.5% royalty and depreciation and amortization annually at a 10% rate.

The San Felipe project is subject to the usual risks that comparable mining projects face, including decreases in metal prices, increases in costs and changes in mineral title law and taxation. Mexico is considered a reasonably stable country and recent changes in taxation are incorporated in the PEA model. Santacruz has a good relationship with the community of San Felipe and has an agreement regarding surface land-use with the local Ejido. As mentioned above, the PEA is based in part on inferred mineral resources which are too speculative geologically to have the economic considerations applied to them that would enable them to be categorized as mineral reserves. Geotechnical analysis of the rock mass indicates potentially difficult ground conditions. The continuity of higher-grades at a stope scale has not been confirmed. The first year of open pit production is modeled almost entirely on inferred resources and there is limited metallurgical information and no geotechnical information to support this part of the model.

The effects of changes to various parameters can be seen on the sensitivity tables below:

Note: This table is in part based on Inferred Mineral Resources which are considered too speculative geologically to have the economic considerations applied to them that would enable them to be categorized as Mineral Reserves. Mineral resources that are not mineral reserves do not have demonstrated economic viability.

A summary of the new resource at various cut-offs is given in the table below. The San Felipe vein and two hangingwall structures are combined in the table. In addition to silver, lead and zinc, the veins contain low amounts of copper and anomalous gold. Since testwork has not been able to produce an economic copper concentrate and gold values are too low to be significant, the values for these metals have not been considered at this time.

Since the veins contain different metals, a silver equivalent value cut-off is given in the resource tables to better compare value. The metal prices used in the silver equivalent estimation are from a 100 day moving average as of June 3, 2014 and are listed below.

The recoveries used in the resource estimation for each metal within each vein are shown below.

The equation used to establish Ag Equivalent is:

Metal prices and recoveries used for the resource are different than those used in the PEA because the resource was completed earlier than the PEA. The new San Felipe mineral resource estimate is supported by 55,050 metres of drilling in 260 drill holes with a total of 11,526 assays. The holes include those drilled by Santacruz in 2013 and by prior operators in the period 1999 to 2000 and 2006 to 2008. The mineral resources were defined to a maximum depth of approximately 450 metres below surface with a total of 1,106 down-hole surveys utilized for control.

The resource estimate was completed by Gary Giroux, P.Eng. and utilized a geological model completed by Hans Smit, P.Geo and Fletcher Bourke, P.Geo. The geological model has six domains; two at La Ventana (HG, LG), Transverales (VT), three at San Felipe (SF, HW-1, HW-2) and one at Las Lamas (LL). Assays for each domain were examined and a top cap was applied to each variable within each domain. Uniform 2 m composites were formed for the domain envelopes. Variography was completed for all domains in the La Ventana and Las Lamas zones. Due to insufficient composites in the VT, SF and HW-2 domains, variography from the HW-1 domain was used with the orientation changed to fit the strike and dip of the structures. Grades for all variables were interpolated into blocks 5 x 2.5 x 5 m using ordinary kriging. For blocks with multiple domains present, a weighted average was determined for the mineralized portion. A specific gravity was established for each domain based on 472 measurements from drill core. Estimated blocks were classified as Indicated or Inferred based on geologic and grade continuity.

The resource is based on holes drilled with HQ-sized core. Core was sawn in half at site and for all drill campaigns one half sent to ALS Chemex, a fully accredited and certified laboratory service. Samples were prepared at the ALS Chemex facility in Hermosillo, Mexico, and were then assayed at ALS Chemex in Vancouver, Canada. All samples were analysed using a one assay ton fire assay with an AA finish for Au (Au-AA23) and a 48 element ICP method for other elements (ME-MS61). Samples with silver results above 100 g/t by (ME-MS61) were rerun using an aqua regia digestion and ICP-AES or AAS finish (Ag-OG62). A comprehensive QA/QC procedure was followed using standards, blanks and duplicates.

All scientific and technical information included in this press release has been reviewed and approved by Gary Giroux, P.Eng., Gregory Blaylock, P.Eng., P.E., JDS Energy & Mining Inc., Deepak Malhotra, SME Registered Member, Fletcher Bourke, P.Geo., and Hans Smit, P.Geo who are all independent of the Company and each of whom is a qualified person, pursuant to the meaning of such terms in NI 43-101.

The data in the PEA has been verified by a QP and a full description of the verified data will be available in the report that will be filed within 45 days.

Santacruz is a Mexican focused silver company with a producing mine (Rosario); two advanced-stage projects (San Felipe and Gavilanes) and an early-stage exploration project (El Gachi). The Company is managed by a technical team of professionals with proven track records in developing, operating and discovering silver mines in Mexico. Our corporate objective is to become a mid-tier silver producer.