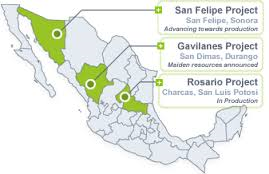 Santacruz Silver Mining Ltd. (TSX-V:SCZ) is pleased to announce the closing of its prospectus offering announced on February 12, 2014 through a syndicate of underwriters led by Canaccord Genuity Corp. and including Raymond James Ltd. The Company issued 10,750,000 common shares at a price of $1.00 per Common Share for gross proceeds of $10,750,000. The Underwriters received a cash fee equal to 6% of the gross proceeds of the Offering, as well as 645,000 warrants, each of which is exercisable to purchase one Common Share for a price of $1.00 for a period of 24 months. Canaccord was also issued an additional 100,000 Common Shares as a corporate finance fee.

The proceeds from the Offering are expected to be used by the Company for exploration and development of its San Felipe and Gavilanes projects in Mexico, and for general working capital, as disclosed in the Company’s short form prospectus dated February 28, 2014.

Santacruz is a Mexican focused silver company with a producing project (Rosario); two advanced-stage projects (San Felipe and Gavilanes) and an early-stage exploration project (El Gachi). The Company is managed by a technical team of professionals with proven track records in developing, operating and discovering silver mines in Mexico. Our corporate objective is to become a mid-tier silver producer.