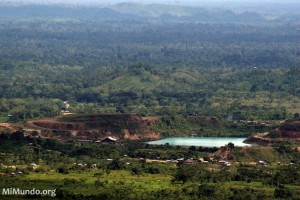 Santacruz Silver Mining Ltd. (TSX VENTURE:SCZ)(FRANKFURT:1SZ) reports that the new access to Rosario I and II veins (lower and upper vein respectively) is now contributing to its milling throughput at the Rosario mine.

On August 25th the main access ramp intersected the Rosario I vein with two new working faces subsequently being opened. Additionally, four high-grade producing stopes (two to the southeast and two to the northwest) are currently being developed at the vein. The initial development work on this section of the Rosario I vein has revealed vein widths of approximately 2 meters, this being greater than the 1.4-meter width previously utilized in the resource calculation. These initial assays taken across the two-meter width show higher grades than those used in the resource calculation:

Development of the Main Ramp is on target to extend from Rosario I to the Rosario II vein by mid-October 2013. At this time, two additional working faces will be added to the mine production with two new production stopes immediately being developed. Production stopes will continue to be added along the 500-meter strike of the currently defined resources.

Two additional producing stopes from the Rosario II vein are expected to contribute to our production in the short term, 4Q13.

Current production is derived from five working faces and one producing stope. Production levels are currently increasing with the objective to reach 500 tonnes per day by the end of 1Q14. Head Grades at the Rosario mill currently are: 255 g/t Ag, 0.25 g/t Au, 2.1% zn, and 1.03% Pb. Mill recoveries are within the forecast range averaging (as shown in the table below).

“Reaching the Rosario I and Rosario II veins is a significant milestone for the Company. We are very excited that the grade and width of the initial intersections at both Rosario I and II exceeded forecasted levels. This, together with new working faces and stopes being developed at both Rosario I and II will allow the company to meet and maintain its primary production objective of 500 tonnes per day by the end of 1Q14. The staff at Rosario Mine, led by Francisco Ramos, will continue to move forward diligently to meet and maintain the growth of our Rosario Mine.”

Mine samples were prepared at the Company’s lab facility at its Rosario lab and analyzed by atomic absorption for Cu, Zn, Pb, Bi, Co, Mn, Sb, Cd and Fe. Gold and silver are analyzed by fire assay method. The Rosario laboratory follows the quality control methodology recommended by CANMET of Canada, such as assaying of blanks, duplicate samples, and check assays by commercial laboratories such as ALS Chemex. The Rosario lab is not yet officially certified to all the standards.

The quality assurance-quality control of Santacruz at the Rosario mine has been described in detail in Gustavson Associates’ NI 43-101 report of December 19, 2012.

Santacruz is a Mexican focused silver company with one producing mine (Rosario); one advanced-stage project (San Felipe) and another advance-stage exploration project (Gavilanes). As well, an early-stage exploration project (El Gachi). Santacruz is managed by a technical team of professionals with proven track records in discovering, developing, and operating silver mines in Mexico. Our corporate objective is to become a mid-tier silver producer.