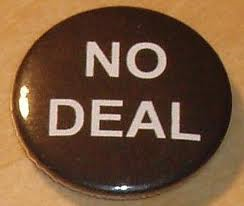 Tyhee Gold Corp. (TSX-V:TDC) announces that Santa Fe Gold Corporation (OTCQB:SFEG) has terminated the previously announced proposed agreement and plan of merger dated January 23, 2014. Under the terms of that agreement and subject to certain conditions, Tyhee, acting through a newly-incorporated Delaware subsidiary corporation, was to have acquired 100% of the issued and outstanding securities, including dilutive securities, of Santa Fe in exchange for securities of Tyhee. According to Santa Fe, the proposed agreement was terminated because Tyhee had failed to “consummate a qualified financing of at least $20 million on or before March 15, 2014” under the terms of the agreement.

Tyhee was satisfactorily proceeding with the previously announced financing, through a special purpose vehicle in an orderly manner and was of the opinion that this SPV financing would likely be achieved on the date specified. On March 4, 2014, Santa Fe advised Tyhee that Santa Fe had received notice that Tony Cavanaugh, an alleged stockholder of Santa Fe, had filed in the Second Judicial District Court of the State of New Mexico, County of Bernalillo, a purported class action complaint on behalf of himself and all others similarly situated, against Santa Fe, the five current members of its Board of Directors, Tyhee and Tyhee’s wholly-owned subsidiary, Tyhee Merger Sub, Inc. Tyhee has not been served in the action.

After Santa Fe provided notice of this legal action, Tyhee both formally and informally requested full transparency from Santa Fe on the impacts of the action, including but not limited to impacts on timing of merger closure, potential fees that Tyhee would be required to pay on behalf of Santa Fe, and potential injunctions that may result. Santa Fe has not responded to any of these requests by Tyhee to date. Tyhee immediately notified the potential investors in the SPV financing of this and other potential legal action against Santa Fe and formally requested Santa Fe for an extension of the time to complete the SPV financing so that proper evaluation and transparency of the action could be understood and plainly delivered to potential SPV investors. Santa Fe did not accede to this request.

Santa Fe has demanded payment of a break fee in the amount of $300,000 in connecton with their termination of the merger agreement.

Tyhee is continuing to evaluate and have discussions with additional acquisition targets as outlined in the Company’s press release of November 14, 2013 and remains strongly committed to a policy of growth by acquisition.