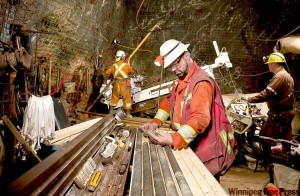 San Gold Corporation (TSX:SGR) (OTCQX:SGRCF) and Kerr Mines Inc. (TSX:KER) are pleased to announce that they have entered into a non-binding letter of intent pursuant to which San Gold and Kerr Mines have agreed to merge their respective businesses pursuant to a plan of arrangement.

“This combination reflects our new strategy of operating multiple, efficient high grade gold mines that are located in mining friendly jurisdictions. Our operating principles of strict grade control, better cost control, lower overheads and operating the mines at the optimum mining rate to properly match the geometry of the orebodies are paying off at Rice Lake and will be applied to other projects, most notably at the Copperstone gold mine in Arizona. The high grade Copperstone mine will be similar in size to the Rice Lake mine and with the ability to restart quickly with low capital requirements under our combined management team. As well, our large portfolio of advanced gold deposits and projects in the Timmins and Kirkland Lake regions is increased immensely with our ownership in SGX Resources in combination with the current Kerr assets,” said Gestur Kristjansson, San Gold’s President and Vice President Finance.

“It’s important to emphasize the extent to which San Gold has reshaped itself over the past four months. This merger provides an important step toward ensuring the full potential of that effort is realized. With more than one producing mine, San Gold is better positioned to get optimum utilization of the knowledge and skills of the operating team and better diversified use of equipment and infrastructure, resulting in greater efficiencies and lower overall costs,” Mr. Kristjansson, added.

“San Gold has made tremendous strides in its turnaround over the past three months. Greg Gibson and the Kerr team have made important contributions to that turnaround. The next step to creating a mid-tier producer will be applying the same principles to the Copperstone property,” said Stephen McIntyre, Chairman of Kerr Mines.

In addition, each holder of outstanding stock options and common share purchase warrants of Kerr Mines will receive such number of replacement options or warrants of San Gold based upon the Exchange Ratio. A break fee of $1,000,000 is payable by either San Gold or Kerr Mines in the event that either party proceeds with an alternative transaction during a specified period while the parties pursue completion of the Transaction.

Kerr Mines has established a sizeable footprint of contiguous gold properties near Virginiatown, Ontario on the prolific 200-km long Cadillac-Larder Lake Break that straddles the Ontario-Quebec border. Mining properties along the Break have historically produced over 95 million ounces of gold. Kerr controls a 26-km long section of the Break with properties extending into Quebec. Kerr’s Ontario assets include the McGarry and Cheminis gold mines in the Kirkland Lake area as well as a five-year option to purchase the Kerr-Addison property, adjacent to McGarry. The Kerr-Addison Gold Mine was one of Canada’s largest gold producers, producing more than 11 million ounces of gold during a 58-year operating life from 1938 to 1996.

Kerr’s recently acquired Larder Lake gold project from Bear Lake Gold, located west of the McGarry Mine, is under an option and joint venture agreement with Gold Fields Abitibi Exploration Corporation (a subsidiary of Gold Fields Limited) entitling Gold Fields to acquire up to 60% of the Larder Lake project by spending up to C$40 million over 5 years.

Kerr also recently acquired the Copperstone gold mine from American Bonanza in Arizona. The mine is fully permitted with significant mining and processing infrastructure in place.