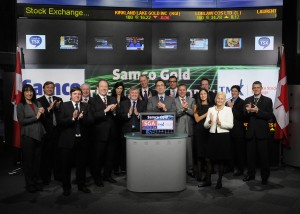 Samco Gold Limited (TSX VENTURE:SGA) is pleased to announce encouraging results of an induced polarization survey completed in May 2013 at its Corina Project in Santa Cruz province, Argentina.

The survey was carried out by the Instituto Nacional de Recursos Minerales of the Universidad Nacional de La Plata, and comprised 30 line km of gradient array IP and 4 line km of pole dipole over two selected areas.

Electrodes were spaced at 25m on each line. The arrangement of current electrodes (1200m apart) gave a maximum depth penetration of approximately 200m.

The area of the survey is shown on Figure 2, together with existing drill-holes and selected rock chip anomalies. Currently, Samco is awaiting the results of a lag soil geochemistry program carried out over substantially the same area as the geophysical grid.

The pole dipole survey comprised four lines, each 1 km long, shown on Figure 2 and also on Figures 3 and 4. Two lines were surveyed in the northern gradient array block covering Cerro de la Mina, and the other two in the southern block.

As well as the geophysical survey, INREMI geologists mapped alteration and geology along the geophysical grid lines, and constructed geological and geophysical profiles along four lines across Cerro de la Mina.

INREMI distinguished eight chargeability anomalies in the Cerro de la Mina area and the area to the south. These are numbered 1 to 8 on Figures 3 and 4. The four pole dipole lines provide depth information on the main anomalies, where they cross them. Table 1 summarizes the anomaly characteristics.

Anomalies A1 and A2 showed the best combination of chargeability response, continuity and depth persistence. A1 is the longest of the anomalies, (1,000m and extending SE outside the area surveyed), and has a parallel resistivity anomaly displaced slightly to the east. Geological profiles surveyed along the lines by the INREMI consultants showed that anomalies A1 and A2 at Cerro de la Mina are associated with zones of quartz veinlets, Fe and Mn oxides, and pervasive silicification. However, at least one greater than 10 mV/V anomaly is developed in an area of soil cover and no outcrop.

The IP survey at Cero Cubilete immediately adjoins the eastern border of the Cerro de la Mina grid, and is essentially an extension of that survey.Two chargeability anomalies denoted AC1 and AC2 were defined at Cerro Cubilete.

The northern group of IP anomalies, including those at Cerro Cubilete, coincide with a NW magnetic trend which extends 1.5 km NW from Cerro Cubilete, although the strongest anomalies, and the known mineralization, strike N-S to NE-SW.

The pattern might be interpreted to reflect north-trending extensional structures in a NW-striking, probably transtensional structural zone. Since the Cerro Cubilete mineralization consists largely of pyritic and base metal sulfides whose geophysical response is a chargeability and resistivity anomaly, it is reasonable to expect that similar sulfide-rich zones might underlie the other similar IP anomalies which have not yet been drilled.

At Cerro de la Mina, anomalous geochemistry, IP response, magnetics, veinlet development and alteration combine to define a compelling exploration target. As indicated in the previous release (28 May 2013), known mineralization at Cerro Cubilete is open along strike, and the IP results suggest that it continues towards the south.

The strong NW-trending IP anomaly A1 and the northerly-trending anomalies A5 to A8 are additional targets. Ongoing lag sampling is expected to provide additional information on these areas.

“We are delighted with these very encouraging IP results. The correlation of the IP with known mineralization and its extrapolation onto the multiple other targets where, in many cases, we have coincident surface expression and/or geochemical and magnetic anomalies, confirms Corina as one of the most exciting new discoveries in the Deseado.”

A detailed presentation on the Corina Project and work carried out to date is available for download from the Company’s website at www.samcogold.com.

Samco Gold’s principal business is the acquisition, exploration and development of precious metals resource properties in South America. The Company’s principal mineral property is the El Dorado Monserrat epithermal gold project, located in the Deseado Massif region of Santa Cruz Province, Argentina. The Company’s goal is to become a producer of gold through the exploration and development of El Dorado Monserrat. Samco Gold also owns a portfolio of other mineral exploration properties in the Deseado Massif including the Corina, Yasmin 1, Judite 1 and Ginette and Giancarla projects.