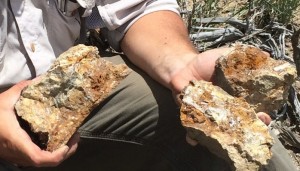 Sage Gold Inc. (TSX-V:SGX) is pleased to announce that, further to its press releases dated December 21st and December 6th, 2016, it has completed the closing of its Hard and Flow Through non-brokered private placements. The Corporation will be issuing 9,325,755 Hard Units at a price of $0.11 per Unit for gross proceeds of $1,025,833. Each Unit will include one common share of the Corporation and one half of one Common Share purchase warrant. Each whole Warrant entitles its holder to purchase one Common Share at an exercise price of $0.24 for a period of 24 months following the Closing Date, whereupon the Warrants will expire. The Corporation has also completed the closing of 3,056,429 Flow Through shares at $0.14 per share for a total of $427,900.

The securities issued pursuant to the Offering will be subject to a four (4) month and one (1) day statutory hold period. In connection with the Offering, a finder’s fee of $78,633 was paid in cash and 243,090 compensation units were issued to certain eligible finders. Each compensation consists of one common share and one half (1/2) of one non-transferrable Warrant. The outstanding shares after this financing are 67,702,373 shares. The Corporation intends to use the net proceeds from the Offering to incur Canadian Exploration Expenses (CEE) on its Onaman and Clavos projects and working capital.

If the Corporation’s shares trade at or above $0.35 per share for 20 consecutive trading days, the Corporation may, at any time after the expiry of the statutory hold period, accelerate the expiration of the Warrants upon not less than 30 days written notice by the Corporation, and thereafter repurchase any unexercised Warrants at $0.001 per underlying common share.

One insider of the Company participated in the Offering, thereby making the Offering a “related party transaction” as defined under Multilateral Instrument 61-101 – Protection of Minority Security Holders in Special Transactions (“MI 61-101“). Nigel Lees, Chief Executive Officer, purchased indirectly 214,286 Flow Through shares pursuant to the Offering and will own or control shares or approximately 6.67% of the total shares issued and outstanding after the completion of the Offering. The Offering was exempt from the formal valuation and minority shareholder approval requirements of MI 61-101 as the Company is not listed under a specified market (as set out in section 5.5(b) of 61-101) and the fair market value of the shares issued to, nor the consideration paid Mr. Lees exceeded 25% of the Company’s market capitalization. No new insiders were created, nor has any change of control occurred as a result of the Offering.