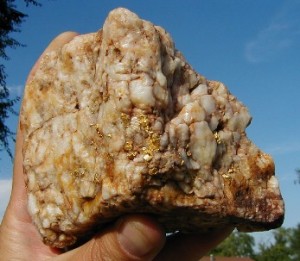 Rye Patch Gold Corp (TSX-V:RPM) (OTCQX:RPMGF) (FWB:5TN) announces it has staked a further 180 claims along the Gold Ridge target. The Gold Ridge target lies 1.5 kilometres west of the Company’s Lincoln Hill resource project in Pershing County, Nevada, and has been traced northward for an additional 6 kilometres. The total number of claims covering the mineralized zone is 360 LYN unpatented lode claims.

The new LYN claims cover historic mines, and initial rock-chip sampling and detailed geologic mapping has been initiated. The Gold Ridge target is of significant size and represents additional upside for the nearby Lincoln Hill resource project. The Company controls a total of 8 kilometres along the Silver Queen fault system with Lincoln Hill on the southern end and Jipangu’s Standard mine located to the north.

Drilling in 2012 and 2014 shows a similar mineral system to the one being drilled at Pershing Gold’s relief Canyon mine located 12.5 kilometres from the Gold Ridge target. The near-surface gold and silver mineralization consists of a brecciated jasperoid within a receptive unit of the Prida Formation along the SQFS. The breccia contains fragments of quartz vein and jasperoid in an iron rich matrix. The higher grades in gold and silver are associated with jasperoid breccia containing quartz fragments. The favorable mineralized unit has inter-bedded limestone and mudstone which creates a permeable and receptive host when folded.

The Company separately purchased 23 unpatented lode claims east of the Wilco project covering the Rosal mine property in Section 30, T28N, R33E from Platoro West Inc. The Company paid approximately US$1,087 per claim and granted a 1.5% net smelter returns royalty to the seller.

Past work at the Rosal mine property shows the extension of the Wilco mineral system to the east. Historic Santa Fe Pacific assay results in the southwest quarter of Section 30 returned anomalous gold values including 12.2 metres grading 1.3 g/t gold and 15.85 metres grading 0.92 g/t gold from surface rock-chip channel sampling. The anomaly is open to the east and requires additional exploration work.

A second target at the Rosal antimony mine is also being investigated. Samples from previous operators ranged between 0.725 g/t gold to 5.05 g/t gold associated with a low-sulfidation gold system within the sediments. Additional work is planned.

The closing date for the New Nevada Resources land purchase, announced on March 3, 2015, for the surface and mineral estate adjacent to the Company’s Lincoln Hill resource project in Pershing County, Nevada, has been extended, and will now close on or before April 7, 2015.

Mr. William Howald, AIPG Certified Professional Geologist #11041, Rye Patch Gold’s CEO and President, is a Qualified Person as defined under National Instrument 43-101. He has reviewed and approved the contents of this news release.

Rye Patch Gold Corp. is a Tier 1, well-funded junior mining company led by a seasoned management team that has participated in major discoveries totalling over 100-million ounces of gold. The team is engaged in the acquisition, exploration and development of quality resource-based gold and silver projects along the emerging Oreana trend and the prolific Cortez trend. Benefitting from its strong financial position, the Company’s strategy is to balance development and exploration risk, creating value by:

The Company’s cash and cash flowing royalty allow for progress without dilution to shareholders.