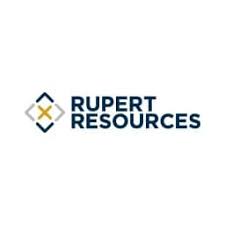 Rupert Resources (TSX-V:RUP)  is pleased to report drilling from the start of its 2022-23 exploration program and provide an operational update on advancing its multi-million ounce Ikkari gold discovery at the 100% owned Rupert Lapland Project in Northern Finland.

James Withall, CEO of Rupert Resources commented, “We are in the unique position in our industry of having delineated the 4Moz Ikkari maiden resource less than two years out from the first discovery hole. We continue to add to our understanding of the Ikkari’s value and future potential through the PEA work, metallurgical data continue to support extremely beneficial metallurgical characteristics previously released, coarse grind size, >95% recovery which underpin the potential for a low-emission, high margin operation. Building on the achievements to date, drilling has recommenced, focussed on expanding the limits of the Ikkari resource and at regional targets to demonstrate further opportunities in the emerging Central Lapland gold belt.”

The 2022/2023 work program, as of August 2022, is planned to include 72,800m of drilling. Around 30,000m will be allocated to Ikkari infill and project drilling with the balance divided equally between Ikkari extension and satellites; and regional exploration across Rupert’s 634km2 land position targeting additional discoveries of scale. Rupert is particularly focused on near-term resource additions over the upcoming winter drilling season to ensure these can be included in future economic and environmental assessments and the eventual permitting application for the Project.

Rupert is pleased to report results from the first hole of the 2022/2023 drilling season targeting extensions of mineralised zone in the east from previous holes.

Further infill drilling results from Ikkari that were received after the cut off date for the current resource update, demonstrate the broad, robust grades which the deposit delivers, including:

A key milestone for Rupert will be the completion of a preliminary economic assessment (PEA) planned for Q4 2022. The PEA will include an updated mineral resource estimate for Ikkari incorporating 37,000m of additional drilling (2021 maiden resource based on 36,000m of drilling).

Fourth round metallurgical test-work will commence this month. Approximately 1 tonne of samples along with 6m3 of site water have been shipped from Ikkari. These tests will provide further data for the feasibility study stage of the project. This follows the third-round test-work in early 2022 that reiterated potential for overall gold recoveries in excess of 95%. Furthermore, the test-work continues to demonstrate the potential for a coarse grind size which should have a significant positive impact to site power requirements. All the results to date continue to demonstrate a simple, highly efficient processing route for gold doré production is possible at the project.

Rupert continues to progress key base line and monitoring programmes to enable timely completion of the Environmental Impact Assessment and permit application stages. Initiatives include:

Our completed 2021/22 program, as of July 2022, included a total of 80,817m of drilling, both Ikkari and regional. Infill drilling at Ikkari continued to return significant intervals of gold mineralisation, in places, at higher grades than estimated in September 2021’s maiden resource estimate. Of note, as part of infill drilling, Hole #121160 returned a record 103m of 8g/t Au from 155m in the central section of the resource (see Feb. 1, 2022 release). Rupert is also pleased with regional target drilling that included the following highlights:

Hole #122180 was drilled in the eastern part of the Ikkari deposit and is the deepest hole on this section of the deposit. The hole intersected the mineralised zone at >500m vertical depth and the intercept of 32m of 2.2g/t Au provides robust continuity, extending the mineralised zone to depth (figure 2, table 2 for details of other mineralised intercepts within this hole). Even further east than this hole, #122142 intersected 7.1m of 4.3g/t Au from 183m and on the easternmost section drilled to date, #122138 intersected 16m at 1.1g/t Au from 486m (385m vertical). Neither of these sections have been drilled to the same depth extent as the intercept of 32m of 2.2g/t Au in 121180, and follow up drilling to depth on these sections is planned as a priority. Other drill holes in the eastern extent of the deposit, reported here (#122122, #122133 and #122138), are not as well mineralised, but are considered likely to have missed a potential mineralised plunge to the east and north. Further drilling in this area is planned for the upcoming drilling season.

Ikkari and Heinä Central were discovered using systematic regional exploration that initially focused on geochemical sampling of the bedrock/till interface through glacial till deposits of 5m to 40m thickness. No outcrop is present, and topography is dominated by low-lying swamp areas.

The Ikkari deposit occurs within rocks that have been regionally mapped as 2.05-2.15 billion years old Savukoski group greenschist-metamorphosed mafic-ultramafic volcanic rocks, part of the Central Lapland Greenstone Belt (“CLGB”). Gold mineralisation is largely confined to the structurally modified unconformity at a significant domain boundary. Younger sedimentary lithologies are complexly interleaved, with intensely altered ultramafic rocks, and the mineralized zone is bounded to the north by a steeply N-dipping cataclastic zone. In general, alteration and structure appear to be sub-vertical, with lithologies generally dipping ~70 degrees north.

At Heinä Central, the multiple sulphide zones identified (25 to >50% pyrrhotite + chalcopyrite + pyrite) are hosted by cataclastic quartz-dolomite breccia within a sedimentary sequence that includes interbedded siltstone and carbonaceous shale. This sequence is intruded by mafic dykes, and intermediate intrusives are also present. Brecciation is associated with a broad, complex, folded structural zone that is related to decoupling along lithological contacts and localised folding.

The Rupert Lapland Project is located in the epicentre of the Central Lapland Greenstone Belt, Northern Finland, where the company has made six new discoveries including the high quality Ikkari Project with an inferred mineral resource estimate of 49Mt at 2.5 g/t gold for 3.95 million ounces1. The Rupert Lapland Project also contains the Pahtavaara mine and mill (on active care & maintenance) within a regional land package of some 634km2. The Company acquired the project for USD2.5m in 2016 and is undertaking exploration both at the existing mine and across the region to demonstrate the potential for significant economic mineralisation. The Ikkari deposit and five other discoveries are located in a structural corridor that lies between the Kittilä Group allochthon to the north and the younger Kumpu Group basin to the south. The mineralised area is dominated by large E-W to ENE trending faults which have controlled broad to isoclinal folding within the sediment-dominated (Savukoski Group) rock package. A complex network of cross cutting structures has focused multi-stage fluid flow, with gold mineralisation associated with massive to fine-grained disseminated sulphides and concentrated at favourable structural intersections.

Rupert Resources is a gold exploration and development company listed on the TSX Venture Exchange under the symbol “RUP.” The Company is focused on making and advancing discoveries of scale and quality with high margin and low environmental impact potential. The Company’s principal focus is Ikkari, a new high quality gold discovery in Northern Finland. Ikkari is part of the Company’s “Rupert Lapland Project,” which also includes the Pahtavaara gold mine, mill, and exploration permits and concessions located in the Central Lapland Greenstone Belt of Northern Finland (“Pahtavaara”). The Company also holds a 100% interest in the Surf Inlet Property in British Columbia, a 100% interest in properties in Central Finland and a 20% carried participating interest in the Gold Centre property located adjacent to the Red Lake mine in Ontario.

No upper cut-off grade and a 0.4g/t Au and 0.1% Cu lower cut-off applied. Italic intervals indicate only copper cut off applied. Unless specified, true widths cannot be accurately determined from the information available. Bold intervals referred to in text of release. Refer to https://rupertresources.com/news/ for details of previously released drilling intercepts. EOH– End of Hole. NSI – No significant intercept. 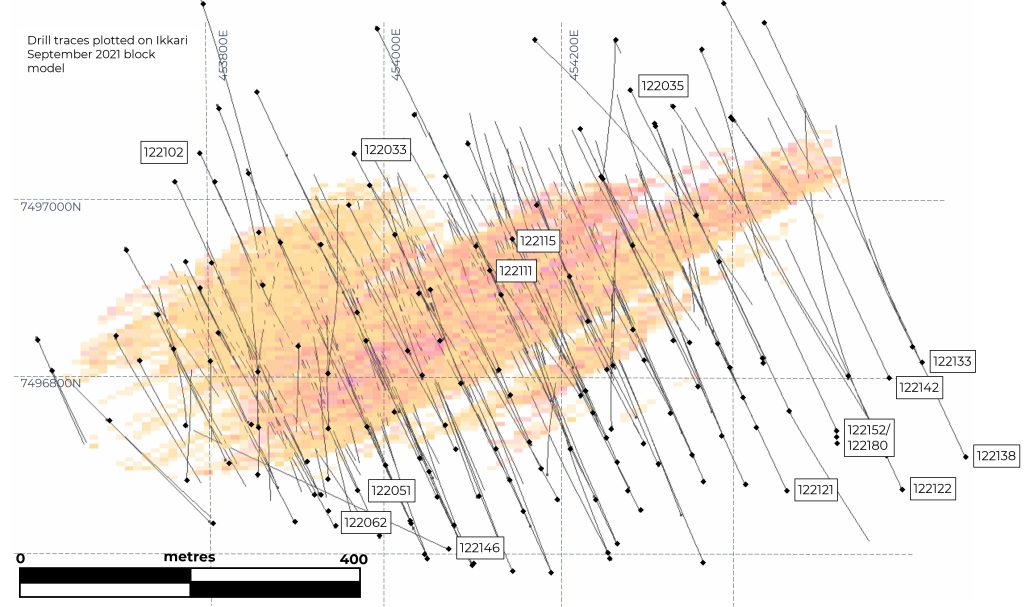 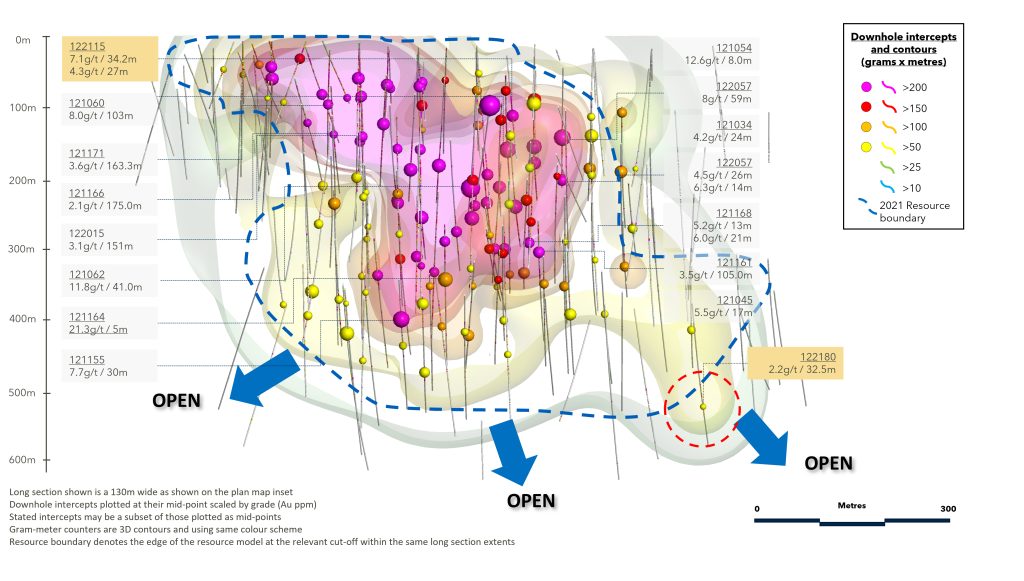