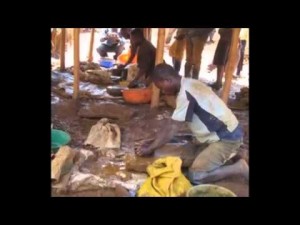 RT Minerals Corp. (TSX-V:RTM) announces that it has entered into an agreement for RTM to conduct exploration and mining operations on three mining permits in north eastern Guyana, South America. The Claims are located in the Potaro-Siparuni region of Guyana. Access to the Claims from the capital city Georgetown is approximately 300 kilometers by road to the Claim area, with a small airfield situated 3 kilometers north east of the Claims. The town of Mahdia is 8 kilometers to the north east with infrastructure for services such as fuel, equipment, and lodging.

The three Claims total 3,565 acres and are permitted for exploration and medium scale mining by the Guyana Geology Mines Commission. The most northerly Claim is 1165 acres and RTM has exclusive rights to explore and develop this claim. The remaining two Claims are 1200 acres each and are presently non-exclusive to RTM save for areas identified therein, and designated by RTM from time to time, for mining mineral resources defined by RTM.

The Claims are situated within the Palaeoprotozoic greenstones of the Guiana Shield about 40km south west of the Omai gold mine (approx. 3.7 million ozs Au). The artisanal mining of gold bearing saprolite has been ongoing in the immediate Mahdia area since the 1880s. There is no recorded modern exploration work completed or filed with the GGMC on the RTM Claims. Site visits to the Claims by RTM representatives and Qualified Persons observed gold bearing material at surface and weathered quartz carbonate vein material within near surface local saprolites on one of the Claims.

Regional exploration, adjacent to the Claims on the Protozoic-Mahdia alluvials (saprolites), has been reported to grade from 0.07 to 8.5 grams of gold per cubic meter. This regional work consists of grab sampling to local artisanal mining on specific areas. Several small scale alluvial operations are ongoing on properties contiguous to the RTM Claims. In addition, NI 43-101 compliant Indicated and Inferred Mineral Resources are reported on an adjacent property owned by Goldsource Mines Inc.

RTM will carry out a Phase One surface alluvial (sapprolite) exploration program that will consist of mapping, test pits, panning gravels and grab samples from each pit for assaying at an accredited laboratory in Georgetown, Guyana. This program is estimated to cost $100,000 USD and will be completed in approximately 60 days.

Contingent on the positive results from Phase One, RTM will carry out a Phase Two program consisting of bulk sampling, by excavator, of saprolite material and the processing of same through a wash plant. The budget for the Phase II program, including the purchase and commissioning of the Wash Plant, is estimated at $300,000 USD.

RTM has the 100% right to explore and conduct mining operations on the Claims over the next five years by initially carrying out the above Phase One and Phase Two programs within three months of signing the agreement and as further outlined hereinafter. If RTM is delayed in completing the above programs within the three month prescribed period, then RTM has the right and option to extend the three month period to up to six months by paying the vendor $100,000 USD cash per month over the last three months of the initial six month period. The Vendor is also entitled to 15% of any gold or other minerals produced from the Claims, paid in Guyana dollars, over the next five years and it is the responsibility of the Vendor to keep the Claims in good standing pursuant to the guidelines of the GGMC for the term of the agreement. Finally, to maintain RTM’s rights relating to the Claims, and on a preliminary cost estimate basis, RTM may incur up to approximately $4,000,000 USD per year in all costs related to the Claims including overheads, payments, exploration, development and mining operations per annum, or such costs amended from time to time by RTM’s Qualified Person, to advance the development of the Claims or to obtain or maintain commercial production on the Claims.