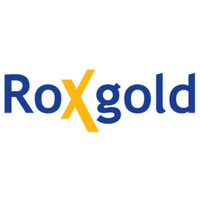 “The recent release of the maiden NI 43-101 Mineral Resource Estimate for the Antenna Deposit has highlighted the robust nature of the deposit and its potential amenability for open pit mining, while the preliminary results from Boulder demonstrate the potential for satellite pits along the main structures. This is the first of several prospects that will be drilled in the coming months, positioning the Company for further strong development,” stated John Dorward, President and CEO.

“The high quality dataset acquired from Newcrest allowed us to fast track the maiden NI 43-101 Mineral Resource Estimate, including an Indicated Resource of 496,000 ounces for the Antenna deposit, while also allowing us to accelerate exploration at Boulder, Kwenko West and Agouti,” commented Paul Weedon, Vice President, Exploration.  “Additional infill and extension drilling at Antenna subsequent to the completion of the maiden Mineral Resource Estimate is anticipated to add to the resource while results from Boulder highlight the potential of the satellite prospects.  With work at Séguéla the priority in the second half of 2019, we will also commence exploration activities in the highly prospective regional permits following up on the extensive stream sediment and termite mound anomalies generated during previous early stage reconnaissance work.”

Fifteen RC and diamond holes (3,782m) have been completed since the acquisition of the Séguéla Project on April 18, 2019.  These holes are in addition to the data used in the preparation of the maiden Séguéla Mineral NI 43-101 Resource for the Antenna deposit.  This drilling was designed to test extensions which were identified during the resource modelling process as having potential for additional mineralization.

The following link to (Table 1) presents the drilling results received to date and include:

* drilled down dip for metallurgical testwork

These results have further confirmed the broad and continuous nature of the Antenna mineralization as well as its near surface proximity with several intervals starting from surface. Mineralization is preferentially associated with a rhyolitic porphyry and a series of north-south striking faults, bounded by volcaniclastics and mafic units in the footwall and ultramafic units in the hanging wall, and associated with sericite-quartz-pyrite alteration and quartz veining.

All results will be incorporated into the forthcoming Preliminary Economic Assessment (“PEA”) and an upgraded Resource estimate anticipated for release in Q4 2019.

Five RC and diamond holes (726m) were drilled at the nearby Boulder prospect (Figure 2) to follow up on previous Newcrest high grade aircore drilling and wide spaced diamond drilling results along a 750m strike length.  Previous drilling identified high grade mineralization associated with a series of north-east trending shear-controlled quartz veins along the contact of a rhyolite/mafic unit. Recent drilling has highlighted the strong structural and lithological controls on the mineralization, with results including:

For a full listing of the results, please refer to the following link (Table 2 – Boulder drill results).  These recent results are in addition to high grade results previously drilled by Newcrest, including:

These recent results are encouraging and will assist the Company’s emerging regional understanding and the drilling planned for Agouti, located approximately 1.5km along strike to the north on the same interpreted structure.

Aircore drilling is also underway at the Kwenko West prospect (Figure 2), testing a series of soil anomalies along a 2.5km zone associated with granite-mafic contact which has been the subject of artisanal workings in the past. Drilling has been completed along four of the nine lines, with results received from the first two (northernmost) lines highlighting a 150m wide by >400m strike stockwork zone of fine quartz+pyrite veins within the granite, extending over lines eight and nine. This remains open along strike to the north-east and the south-west.

Preparation for drilling at Agouti (Figure 2) is well advanced with drilling scheduled to start in mid-July, following up on previous Newcrest drilling results, including:

Target ranking is underway to prioritise the other Séguéla satellite prospects that are primarily within 10km of Antenna and where a significant amount of previous work has highlighted the regional prospectivity (Figure 2). This includes four recent rock chip samples at P3 returning grades between 10.8 g/t Au to 40.0 g/t Au from a zone of outcrop and artisanal workings.  These targets will be tested further in the second half of 2019.

An airborne geophysics program is planned for August to improve the understanding of the key controlling structures and geology on five of the permits, (including Séguéla) and to assist with refining target generation.  Previous early stage reconnaissance work by Newcrest on these regional permits highlighted several broad stream sediment and termite mound anomalies extending over several kilometers at Dianra (14km strike length) and Bouake (9.5km strike length), and the program has been extended to cover the recently granted Kadyoha permits.

A detailed review of the key structural controls, geostatistical and grade control mapping data as part of the recently released Mineral Resource statement has led to an improved understanding of the orientation of the high-grade ore shoots at the 55 Zone.  Previously these were interpreted as being steeply plunging at approximately 70-75 degrees towards the east within the overall shear zone.  Recent mapping and geostatistical work have highlighted a slightly flatter plunge at 55-65 degrees to the east, still within the overall shear zone.

The results of this review are being incorporated into the early stage planning for the next phase of deep infill drilling scheduled for the second half of next year.  A dedicated drill platform is planned to be developed at approximately the 4700L level (Figure 3), approximately 650 metres below surface, to support the next Resource infill and extension program.

During the second quarter of 2019, exploration activities focussed mainly on extending soil auger grids to the south along the Yaramoko structure and to the north at San and Zone 300 where interpreted granite contacts are coincident with historic soil anomalism.  Scout RC and diamond drilling was also carried out at selected coincident geophysical and geochemical targets at Kaho, Haho, and the Boni Shear (Figure 4), returning numerous intervals of shearing with quartz veining, alteration and associated pyrite, supporting the overall regional structural interpretation associated with the Yaramoko and Bagassi South mineralization.

Work has commenced on reviewing and refining the regional lithogeochemical model using the large amount of data generated over recent years, including detailed mapping of underground workings, extensive regional auger drilling, scout RC and diamond drilling, and work on pathfinder geochemistry.  The results of this review will be used to prioritize targets for the 2019/2020 exploration season.

Paul Weedon, MAIG, Vice-President, Exploration for Roxgold Inc., a Qualified Person within the meaning of National Instrument 43-101, has verified and approved the technical disclosure contained in this news release. This includes the QA/QC, sampling, analytical and test data underlying this information. For more information on the Company’s QA/QC and sampling procedures, please refer to the Company’s Annual Information Form dated December 31, 2018, available on the Company’s website at www.roxgold.com and on SEDAR at www.sedar.com.

The holes were drilled with NQ2 sized diamond drill bits for drill holes reported in this press release. Company personnel are located at the drill site. Employees of Roxgold conducted all logging and sampling. The core was logged, marked up for sampling using standard lengths of two metres outside of the “zone” and adjusted to lithological contacts up to one metre within the “zone”. Samples are then cut into equal halves using a diamond saw. One half of the core was left in the original core box and stored in a secure location at the Roxgold camp within the Yaramoko area. The other half was sampled, catalogued and placed into sealed bags and securely stored at the site until it was shipped to Activation Laboratories located in Ouagadougou (the “Lab”). The core was dried and crushed by the Lab and a 150 gram pulp was prepared from the coarse crushed material. The Lab then conducted routine gold analysis using a 50 gram charge and fire assay with an atomic absorption finish. Samples returning over 5.0 g/t were also analyzed by gravimetric analysis. Quality control procedures included the systematic insertion of blanks, duplicates and sample standards into the sample stream. In addition, the Lab inserted its own quality control samples.

RC drilling used a 5.25 inch face sampling pneumatic hammer with samples collected into 60 litre plastic bags. Samples were kept dry by maintaining enough air pressure to exclude ground water inflow. If water ingress exceeded the air pressure, RC drilling was stopped, and drilling converted to diamond core tails. Once collected, RC samples were riffle split through a three-tier splitter to yield a 12.5% representative sample for submission to the analytical laboratory. The residual 87.5% sample were stored at the drill site until assay results were received and validated.  Coarse reject samples for all mineralized samples corresponding to significant intervals are retained and stored on site at the Company controlled core yard.

Diamond drill holes were drilled with NQ2 sized diamond drill bits. The core was logged, marked up for sampling using standard lengths of one metre. Samples were then cut into equal halves using a diamond saw. One half of the core was left in the original core box and stored in a secure location at the Company core yard at Séguéla. The other half was sampled, catalogued and placed into sealed bags and securely stored at the site until shipment.

All RC and diamond core samples were shipped to ALS Laboratories preparation laboratory in Yamassoukro for preparation. Samples were dried and crushed by the Lab and a 250-gram split prepared from the coarse crushed material, prior to pulverization and preparation of a 200g sample.  Samples are then shipped via commercial courier to ALS’s analytical facility in Kumasi, Ghana where routine gold analysis using a 50-gram charge and fire assay with an atomic absorption finish was completed. Quality control procedures included the systematic insertion of blanks, duplicates and sample standards into the sample stream. In addition, the Lab inserted its own quality control samples.

Roxgold is a Canadian-based gold mining company with assets located in West Africa.  The Company owns and operates the high-grade Yaramoko Gold Mine located on the Houndé greenstone belt in Burkina Faso and is also advancing the development and exploration of the Séguéla Gold Project located in Côte d’Ivoire. 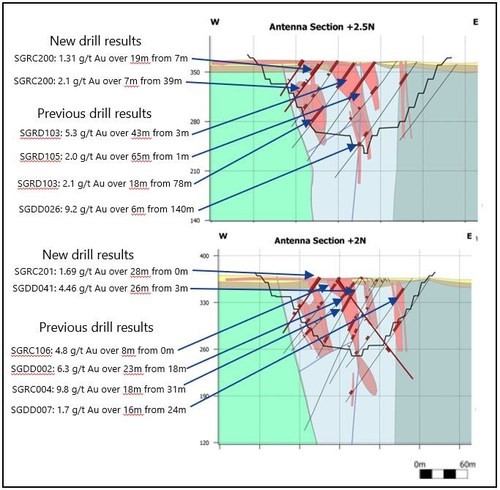 Figure 1: Cross sections through the Antenna deposit showing the high grade near surface nature of the mineralization. Pit shell is based on a Whittle optimization at US$1450/oz gold price. The Roxgold new drill results were drilled following the completion of the maiden Mineral Resource estimate and therefore are not included; previous drill results were included in the estimate. (CNW Group/Roxgold Inc.) 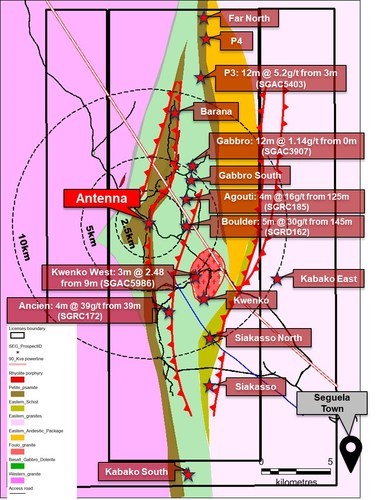 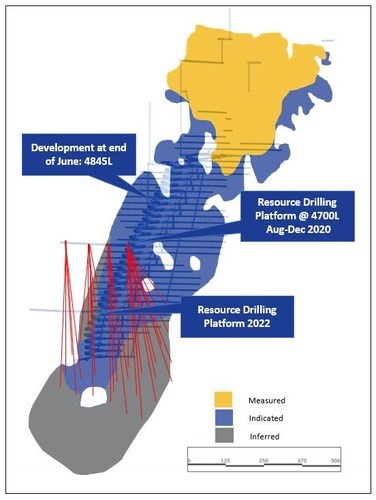 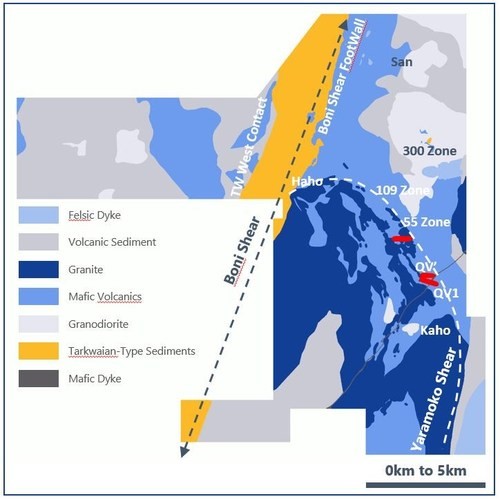