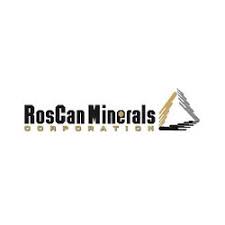 Additional results from the main Southern Mankouke Zone (MS1) confirm the occurrence of high-grade mineralization at depth, in the fresh rock, as demonstrated with Hole DDMan21-104B. It is the deepest high-grade intercept in bedrock to date, showing strong continuity over multiple intervals (Table 1), and it remains open at depth beyond 300 meters vertical depth (Figure 2).

Additionally, Holes DDMan21-101 and DDMan21-107 continue to confirm the high-grade nature of MS1, showing that mineralization is a clearly defined with consistency over wide intercepts. MS1 has now been traced over a strike length of 550 meters and as wide as 150 meters in certain parts and to a depth of 300 metres vertical. Figure 4 points to several plunging shoots at good grades that could be traced down to 130 meters depth.

At the MS3 Discovery Zone, where previous drilling results (DDMan20-62, 64, 67, 69) had established a 200 meters north south mineralized trend, DDMan20-106 with 2.33 gpt gold over 18m from 53.3m indicates a potential high-grade mineralization extension to the west (Figure 3). Additional follow up drilling has been completed, pending results.

Nana Sangmuah, President and CEO, stated, “We continue to be very encouraged with our flagship target Mankouke South, which again has delivered results that reinforce our geological thesis that we are on top of a system with multiple parallel zones starting at surface and with significant potential at depth. Hole 104B, the highest grade and depth to date at the Main Mankouke South Zone (MS1), points to a potential feed source and warrants follow up.

The plunging shots also confirm this thesis of high grade at depth, a fact corroborated as well with the geophysics showing the existence of conductors as deep as over 1km. These results strengthen our interpretation of good potential at depth, which we would be testing in due course.

This batch of drilling has also further expanded the footprint at Mankouke Discovery Zone (MS3), with Hole 106 indicating mineralization at MS3 not only is traced north to south but also extends to the west, expanding toward the recently acquired Mankouke West permit, where we have just completed a large first pass drilling program and are eagerly awaiting assays.

With approximately 20,000 metres of drilling results yet to be received, we are looking forward to providing further updates in the near future as more assays become available.” 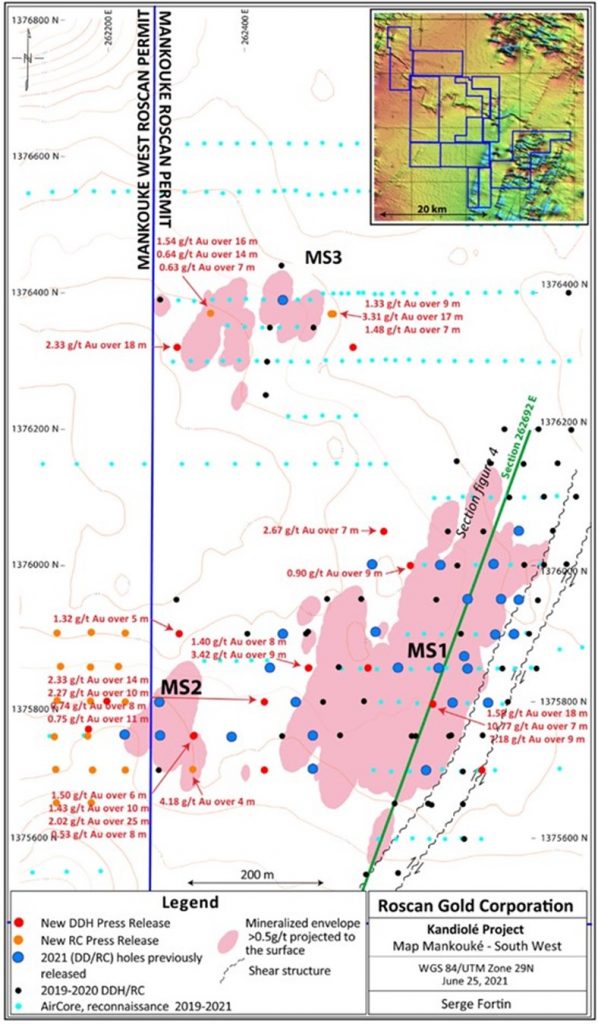 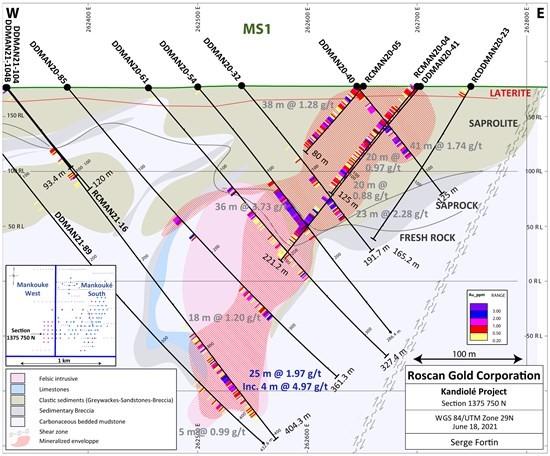 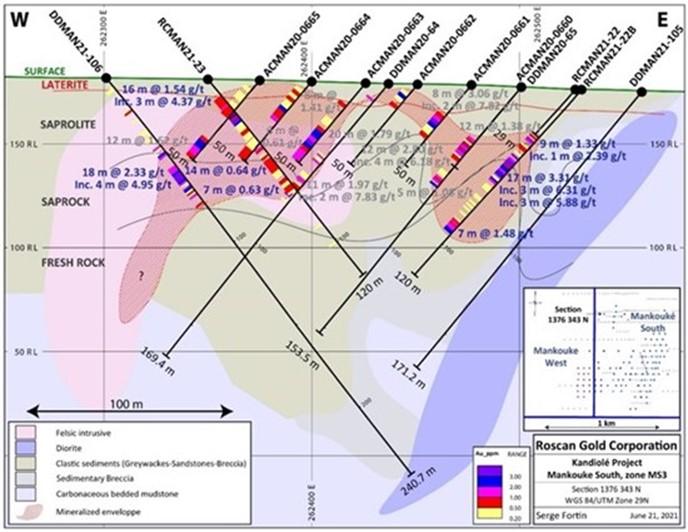 The gold mineralization at Mankouke South is located approximately 25km east of the Fekola mine (B2Gold Corp.), but also along a prospective major NE-SW structural corridor from Siribaya-Diaka (IAMGOLD Corporation) to Seko (Oklo Resources Limited). Gold mineralization in Mankouke South occurs within hydrothermally altered and sheared metasediments of the Kofi formation which include greywacke, limestone and diamictite but also in the edge of a felsic intrusive cross cutting the sedimentary package.

The Mankouke South mineralization is located within the sheared eastern limb of a fold directly above a footwall unit of finely banded and alternating graphitic shale and limestone referred to as the dirty limestone (“DLS”). The border north of the mineralization corresponds with the edge of a NE-SW conductive zone from the geophysics surveys but MS3 also overlays the beginning of a Nord East conductive lineament. The gold mineralization is associated with a strong alteration over several lithologies, mainly albite, silicification, ankerite and chlorite, with the sulfite occurrences (pyrite, arsenopyrite) but also fracturing and quartz veins and veinlets. 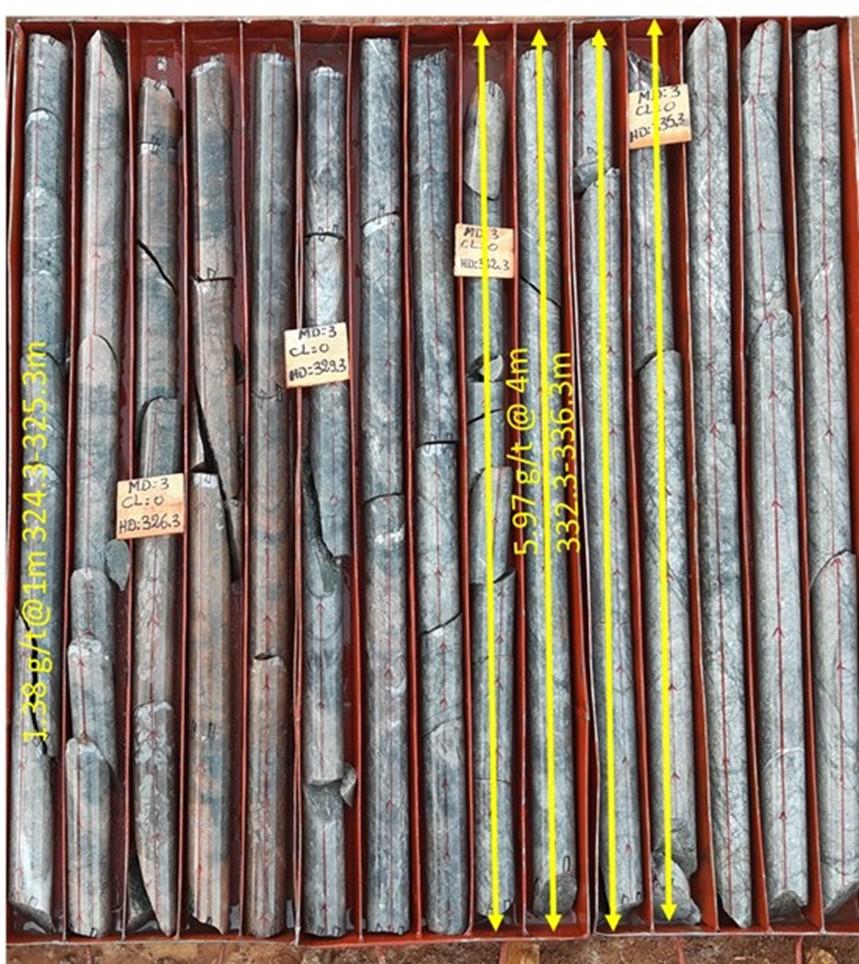 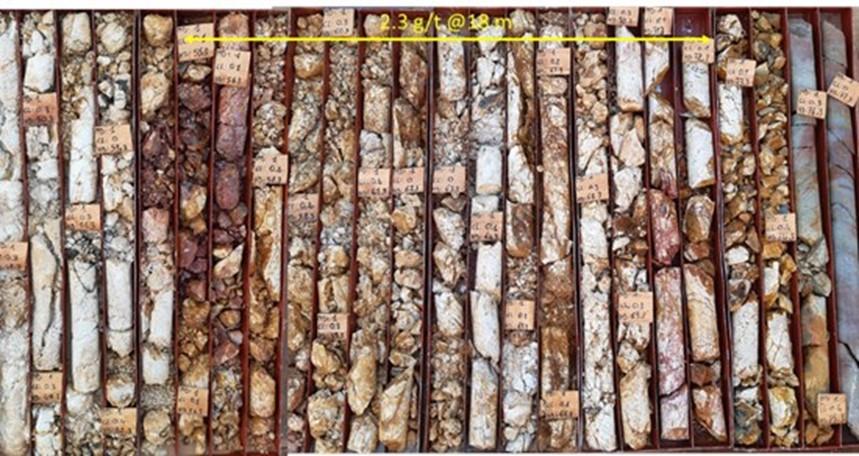 The samples are sent for preparation to the Bureau Veritas Mineral Laboratories in Bamako, Mali and assayed at their analytical facilities for fire assay with atomic absorption finish and by gravimetric finish for grades above 10gpt Au.

Greg Isenor, P. Geo., Director for the Company, is the designated Qualified Person for this news release within the meaning of National Instrument 43-101 (“NI 43-101”) and has reviewed and verified that the technical information contained herein is accurate and approves of the written disclosure of same.