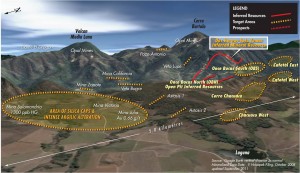 Rokmaster Resources Corp. (TSX-V:RKR) (LMA:RKR) is pleased to announce that it has entered into an arms’ length letter agreement dated May 4, 2015 pursuant to which it has agreed, subject to completion of due diligence and the receipt of regulatory approval, to purchase 80% of the issued and outstanding shares of Cream Minerals de Mexico, S.A. de C.V. from CCM’s two individual shareholders. Rokmaster also has the option to acquire the remaining 20% of the CCM Shares.

CCM is a private Mexican corporation that owns 100% of certain mining concessions making up the 2,560 hectare Nuevo Milenio silver-gold property located in the Tepic-Guachinango area in the State of Nayarit, Mexico.

The Company intends to explore for and develop large scale epithermal style silver gold mineralization that could have potential as a combination of underground/open pit(s) with both mill and heap leach processing methods.