Rockcliff Intersects Near Surface High Grade Zinc-Copper Mineralization at Bur Property Including 13.51% ZnEq Across 3.26 Metres and 15.64% ZnEq Across 1.94 Metres

Rockcliff Intersects Near Surface High Grade Zinc-Copper Mineralization at Bur Property Including 13.51% ZnEq Across 3.26 Metres and 15.64% ZnEq Across 1.94 Metres

Rockcliff Metals Corporation (CSE: RCLF) (FSE: RO0) (WKN: A2H60G)  is pleased to announce the completion of its phase four drill program at the Company’s Bur Property located in central Manitoba. The drill program was successful in identifying additional shallow, near surface, high-grade Zinc-Copper mineralization along strike of the historcial Bur Zinc-Copper Deposit. Rockcliff is presently earning a 100% interest in the Bur Property.

Rockcliff’s President and CEO Alistair Ross commented: “Our phase four drill program has shown great promise in extending the known mineralization of the historical Bur Zinc-Copper Deposit. The drilling has identified shallow high-grade mineralization above 150 metres vertical over a distance of more than 500 metres in an underexplored area south of the high-grade deposit. We look forward to continuing to advance the property as we near our 100 % earn-in requirement of $3 million. Given our current copper focus, we are particularly interested in the number of copper assays over 2% in this area.”

Significant down the hole assays from Rockcliff’s phase four drill program are included in the following table: 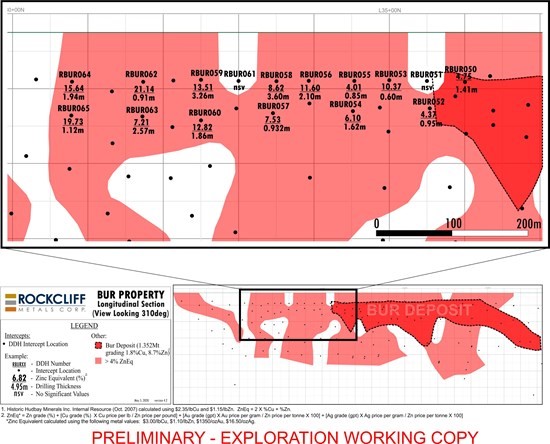 Notes: 1. CIM definitions were followed for the estimation of mineral resources. 2. Mineral resources are estimated at a zinc equivalent cut-off of 5%. 3. Cut-off grade was based on a zinc price of US$1.15 per pound and a copper price of US$2.35 per pound. 4. Given the tonnage, grade and orientation of the deposit, AMEC considered the Bur Deposit to be reasonably amenable to extraction using underground mining methods. 5. Specific Gravity measurements used to estimate the mineral resource tonnes ranged from 2.64 to 3.74 with an average of 3.16. 6. A minimum mining width of 3 metres was used. 7. Mineral resources are not mineral reserves and do not have demonstrated economic viability. 8. The deposit was documented in a report dated October 1, 2007 and titled “Bur Project, Snow Lake Manitoba, Canada NI 43-101 Technical Report”. The report was prepared for Hudbay by AMEC and was filed on Hudbay’s SEDAR profile on January 31, 2008.

The historical Bur Zinc-Copper Deposit is a narrow stratiform, distal, massive sulphide volcanogenic massive sulphide deposit that occurs within a turbidite assemblage of interbedded metagreywacke, metasiltstone and graphitic meta-argillite in a basinal area situated between two granitic intrusions. The northeast striking deposit dips 60-70 degrees northwest, ranges from <0.3metres up to 5 metres thick and to date has a known lateral extent of approximately 4,500 metres. Historic and recent drilling throughout the Bur Property has encountered near surface, disseminated, semi-massive and massive sulphide mineralization below shallow overburden along a strike length of over 8,000 metres and to a vertical depth of 950 metres. Mineralization consists of sphalerite, chalcopyrite, pyrrhotite, pyrite, galena and arsenopyrite. The Bur Zinc-Copper Deposit is open in all directions and contains up to 20% felsic or cherty nodules consisting of wall-rock and late quartz fragments displaying a brecciated texture to the mineralization. The Bur Zinc-Copper Deposit may be amendable to ore sorting technology where unmineralizaed diluted waste rock is selectively removed from mineralized ore to enhance the quality and grade of the material that could trucked and made available to a processing facility.

Rockcliff is earning a 100% interest from Hudbay by spending $3.0M over a 4 year period on the Bur property. Please refer to the Company’s news release on Sedar dated September 26, 2016 for specific terms of the option agreement

Samples of half core were packaged and shipped directly from Rockcliff’s field office to TSL Laboratories, in Saskatoon, Saskatchewan. TSL is a Canadian assay laboratory and is accredited under ISO/IEC 17025. Each bagged core sample was dried, crushed to 70% passing 10 mesh and a 250g pulp is pulverized to 95% passing 150 mesh for assaying. A 0.5g cut is taken from each pulp for base metal analyses and leached in a multi acid (total) digestion and then analyzed for copper, lead, zinc and silver by atomic absorption. Gold concentrations are determined by fire assay using a 30g charge followed by an atomic absorption finish. Samples greater than the upper detection limit (3000 ppb) are reanalyzed using fire assay gravimetric using a 1 AT charge. Rockcliff inserted certified blanks and standards in the sample stream to ensure lab integrity. Rockcliff has no relationship with TSL other than TSL being a service provider to the Company.

Ken Lapierre P.Geo., VP Exploration of Rockcliff, a Qualified Person in accordance with Canadian regulatory requirements as set out in NI 43-101, has read and approved the scientific and technical information that forms the basis for the disclosure contained in this press release.

Visit Rockcliff’s YouTube channel with a message from the President and CEO, Alistair Ross. To access the video, please visit: https://www.youtube.com/watch?v=ArNsowrnnjA

Rockcliff is a well-funded Canadian resource development and exploration company, with a fully functional +1,000 tpd leased processing and tailings facility as well as several advance-staged, high-grade copper and zinc dominant VMS deposits in the Snow Lake area of central Manitoba. The Company is a major landholder in the Flin Flon-Snow Lake greenstone belt which is home to the largest Paleoproterozoic VMS district in the world, hosting mines and deposits containing copper, zinc, gold and silver. The Company’s extensive portfolio of properties totals over 4,500 square kilometres and includes eight of the highest-grade, undeveloped VMS deposits in the belt.