Baloo Mine extended to South

Note: Tables showing complete results and drill hole locations can be found at the end of this news release.

RNC Minerals (TSX: RNX) is pleased to announce positive results from ongoing drilling at Higginsville and a further update of our review of historical drill records. As part of the Company’s open pit pipeline development strategy, drilling is now underway at the Jupiter project to be followed by Mitchell, two of the Company’s paleochannel deposit targets.

Paul Huet CEO and Executive Chairman RNC said, “Following the announcement of the elimination the Morgan Stanley NSR royalties last week (see RNC news release dated May 11, 2020), we are excited to be seeing further strong examples of the potential at Higginsville. Not only are we seeing further potential additions to open pit resources, but our ongoing technical review of the historical database has revealed another excellent high-grade target for us to pursue at the Jupiter project.

At Jupiter, the presence of historical drilling grades in excess of 230 g/t over two metres at relatively shallow depths (approximately 60 metres from the surface) highlights the tremendous upside potential at Higginsville. These results follow on from the historic drill results from the Aquarius deposit (see RNC news release date February 27, 2020) which are also high-grade and close to the surface. With the elimination of the Morgan Stanley NSR royalty, these projects will be free of this long-standing burden, which held back exploration and mining at Higginsville for over a decade.

Over the course of 2020, we will continue to aggressively target these new areas as we also test our existing pits for additional ore body extensions. The commencement of drilling on the paleochannel deposits is exciting and we look forward to continuing to build upon the outstanding results that we have delivered thus far at Higginsville in 2020.”

The Pioneer gold deposit is located 13 km south south-east of the HGO processing plant (Figure 1).  RNC commenced drilling at Pioneer late last year with the aim of upgrading and increasing the Historical Mineral Resource. The work involved a two-stage reverse circulation (“RC”) drill program totaling 86 drill holes for 7,953 metres. Results from the 2019 – 2020 drilling have extended the mineralization along strike to the south and down dip and identified a shallow, south plunging high-grade shoot (Figure 2). Further drilling is planned through the second half of 2020 to test continuity of the mineralization at depth and test the potential for an underground operation by drilling the interpreted high-grade shoot extensions.

Highlights1 of gold results from the drilling are listed below:

Mineralization at Pioneer is interpreted to dip approximately 30° towards the east and is hosted within a mafic package comprised mainly of silicified basalt with narrow, cherty interflow sediments. Mineralization is interpreted as bounded by steeply east dipping, north northeast trending regional shears.

Grade control drilling and follow-up RC drilling (6 holes for 262 metres) in the Baloo pit has extended the high-grade mineralization beyond the pit design at the southern end of the pit (Figure 3). Results from the grade control drilling and the deeper follow-up holes will be used to extend the existing pit design. Potential to extend the northern end of the pit at depth is also under review as supported by earlier released drill results (see RNC news release, Jan. 23, 2020). Drill intersection1 gold result highlights from the March RC program are listed below:

The deeper sections of the Baloo historical resource are planned to be tested with infill diamond drilling later in 2020. A review of previous exploration work completed by S2 Resources shows that mineralization extends over 300 m below surface with a number of significant intersections just below the current pit design highlighting the potential to extend the mine life of this deposit with an underground operation (Figure 3). Highlights of gold results from the S2 drill intersections1 (S2 Resources Ltd., ASX news releases, February 10, 2016, December 8, 2016 and February 13, 2017) are listed below:

Mineralization at Baloo is located on the Buldania Fault, a north north-west striking fault dipping shallowly approximately 30° to the east. Alteration comprises biotite +/‐pyrite‐arsenopyrite with multiple generations of veining present within the Fault zone. Gold mineralization is associated with quartz‐arsenopyrite‐pyrite veining.

The remaining paleochannel historical resources were assessed and prioritized for follow-up drilling. This work resulted in all three areas (Mitchell, Jupiter and Pluto) being targeted for infill and extensional drilling, with the objective of upgrading and adding to the historical mineral resources. Drilling will also test the continuity of primary mineralization previously intersected at the Jupiter prospect, with the objective of producing a Mineral Resource estimate for this mineralization.

RNC’s initial focus will be to improve confidence in the historical high-grade intersections with the objective of defining a Mineral Resource for mine evaluation. This will be driven in tandem with results from the paleochannel which overlies the primary mineralization. Highlights of historical drill intersection1 gold results from the primary mineralization are listed below (see Alacer Gold Corp. news release, March 26, 2013):

Paleochannel gold deposits comprise both ancient placer gold, normally near the base of the channel-fill sequences, and chemically precipitated secondary gold within the channel-fill materials and underlying saprolite. These gold concentrations commonly overlie, or are adjacent to, primary mineralized zones within Archaean bedrock. At Jupiter, the primary mineralization, discovered by Alacer in 2012, begins approximately 50 metres below surface and is associated with a north-south steeply dipping shear structure hosted within Paringa basalt (Figure 4). Mineralization is associated with tensional quartz-(chlorite-carbonate) veining and sulphides (pyrite) with visible gold occurring in some intersections. The structure is variably mineralized for over 1 km of strike.

The disclosure of scientific and technical information contained in this news release has been reviewed and approved by Stephen Devlin, FAusIMM, Vice-President Exploration & Growth, Salt Lake Mining Pty Ltd, a 100% owned subsidiary of RNC, a Qualified Person for the purposes of NI 43-101.

At the Higginsville Gold Operation reverse circulation chip sampling was conducted by RNC personnel. Samples are transported to Bureau Veritas Minerals Pty Ltd of Kalgoorlie and Perth for preparation and assaying by 40gram (approx.) fire assay analytical method. Analytical accuracy and precision are monitored by the analysis of duplicates, additional blank material and certified standards inserted in the sample stream. Samples are weighed as received, dried and split to less than 3kg then pulverised by LM-5 to ensure a minimum 90% passing at -75µm.

The historical data referenced in this release has been reviewed under the supervision of Stephen Devlin, Vice-President, VP Exploration & Growth, Salt Lake Mining Pty Ltd, a 100% owned subsidiary of RNC, a Qualified Person for the purposes of NI 43-101, and is supported by relevant monthly exploration reports and historic mineral resource reports which detail the QA/QC procedures used on drill samples and provide analysis of the results of all associated QA/QC samples including blanks, standards (CRM samples), check assays and duplicates.  All drilling from 2004 to present followed industry standard practices, with pre-2004 historic drilling not detailed but assumed to be similar to current practices (sources for such historical drill results are identified where applicable above). A qualified person has not done sufficient work to classify the historical estimates as current mineral resources and RNC is not treating the historical estimates as current mineral resources.

RNC is focused on growing gold production and reducing costs at its integrated Beta Hunt Gold Mine and Higginsville Gold Operations in Western Australia. The Higginsville treatment facility is a low-cost 1.4 Mtpa processing plant which is fed at capacity from RNC’s underground Beta Hunt mine and open pit Higginsville mine. At Beta Hunt, a robust gold mineral resource and reserve is hosted in multiple gold shears, with gold intersections along a 4 km strike length remaining open in multiple directions. HGO has a substantial historical gold resource and highly prospective land package totaling approximately 1,800 square kilometers. In addition, RNC has a 28% interest in a nickel joint venture that owns the Dumont Nickel-Cobalt Project located in the Abitibi region of Quebec. Dumont contains the second largest nickel reserve and ninth largest cobalt reserve in the world. RNC has a strong Board and management team focused on delivering shareholder value. RNC’s common shares trade on the TSX and they also trade on the OTCQX market. 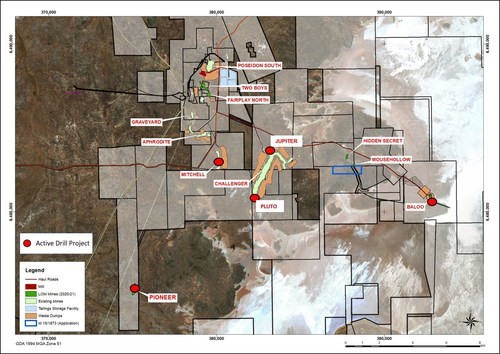 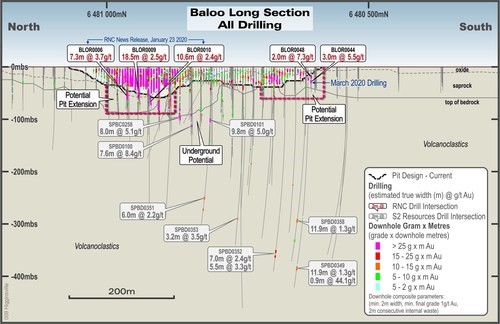 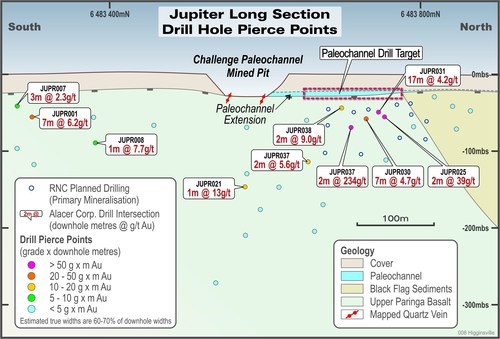