Paul Andre Huet, Chairman & CEO, commented: “I am very pleased with our strong first quarter operating performance, which is reflected in the solid financial results reported today. Despite challenges associated with the Australian bushfires, the subsequent heavy rainfall and the current COVID-19 situation, RNC reported a strong start to 2020, with first quarter gold production totaling 24,816 oz. Not only did we deliver strong production, but we also continued our downward trend in AISC, in line with our US$1,000 per ounce target by the end of 2020. AISC of US$1,101 per ounce sold during the quarter was a US$30 per ounce improvement over the fourth quarter of 2019.

The continued improvements made in our AISC performance were achieved despite increased costs associated with the bushfires and inclement weather as well as the double-shifting of mining operations in excess of milling rates in order to continue to build stockpiles from Beta Hunt and Higginsville ahead of the mill. This is a remarkable achievement by our Australian operations and something I am personally very proud of.

While we currently do not anticipate any material impact on RNC’s operations, including with respect to suppliers, service providers and employees due to the ongoing global COVID-19 pandemic, management continues to monitor developments in order to be in a position to take appropriate actions as needed. Management has elected to increase ROM stockpile levels, which now total 106,000 tonnes, should disruptions to the mine site or supply chain occur in the future. This strategy proved prudent ahead of the Australian bushfires, which affected both Q4 2019 and Q1 2020.

As a result of the proactive approach we’ve taken to manage these challenges over the last two quarters, we remain on track to achieve our 2020 gold production guidance of 90,000-95,000 ounces and AISC1 of US$1,050-$1,200 per ounce sold, assuming no significant interruption in operations as a result of the COVID-19 virus.

During the quarter, our operations continued to generate strong cash flow despite the significant logistical challenges. With a cash balance of $38.4 million, net of delivery of $5.3 million into our hedges, RNC is currently in the strongest financial position in its history and we look forward to continuing to deliver for our stakeholders this year.”

Further to RNC’s news release dated March 18, 2020, the Corporation has continued to maintain strict control measures at its operations in response to the COVID-19 pandemic. Procedures are in place to ensure operating sites remain as prepared and responsive to the situation as possible.  RNC has been actively monitoring the advice of local health authorities and has mandated that site personnel take precautions when traveling to and from site, along with isolation periods should anyone exhibit symptoms consistent with COVID-19. RNC’s full-time nurse and supporting medical staff are monitoring the status of individuals entering and leaving site and the operations have been sealed off from any outside visitors not critical to business operations.

RNC will continue to adapt to this fluid situation, with its top priority being the health and safety of its employees and stakeholders.

On a consolidated basis, 314,000 tonnes were milled in the first quarter of 2020 at an average gold grade of 2.35 g/t, to produce a total of 24,816 ounces of gold. Mill availability remained in a stable range, averaging over 95% consistent with the prior quarter. Production during the first quarter of 2020 consisted of material from Beta Hunt underground, Baloo open pit, Fairplay North open pit and a small amount of stockpile material.  The first quarter milled grade of 2.35 g/t was lower than the grade of 2.60 g/t in the prior quarter partially due to the processing of lower grade stockpile material to offset the impact of regional road closures during the Australian bushfires and subsequent flooding from heavy rainfalls.

Cash operating costs1 and AISC1 were US$965 and US$1,101 per ounce sold respectively on a consolidated basis for the first quarter of 2020.

Following the strong start to the year, RNC is maintaining its consolidated production and cost guidance for its Australian operations (Beta Hunt and HGO) of 90,000 to 95,000 ounces of gold at an average AISC1 of US$1,050 to US$1,200 per ounce sold. RNC continues to target AISC1 costs of approximately US$1,000 per ounce sold by the end of 2020.

Figure 1 below shows a number of areas where RNC is either actively advancing or evaluating as high-priority exploration targets at Higginsville. In addition to ongoing exploration at Baloo, where mining has been underway since the HGO acquisition last June, and Fairplay North where mining began in December 2019, a number of projects covered under the re-negotiated Morgan Stanley royalty are now considered high priority. These areas include Aquarius, Hidden Secret, Mousehollow, Pioneer, the Two Boys extension and the paleochannel deposits.

On January 23, 2020, RNC announced that Baloo Stage 1 mining has been extended to June 2020. Stage 2 approvals were subsequently announced on January 29, 2020, which is expected to extend the open pit mine life through to January 2021. Development and mining of the Fairplay North open pit continued with Stage 1 expected to extend through July 2020, followed by Stage 2 through late 2020.

With respect to drilling, RNC announced that 20 resource definition holes totalling 492 metres and 19 exploration holes totalling 1,897 metres at Baloo had been completed since the acquisition of HGO. Drilling focused on the Eastern Footwall and down-dip plunge extensions of Baloo mineralization with the aim up increasing and upgrading the existing resource base.

Also on January 23, 2020, the Corporation announced it had completed 26 resource definition RC holes totalling 1,721 metres at Fairplay North. Drilling focused on upgrading the existing historical resource within and on the margins of an optimised pit shell. Assay results confirmed the extension of near surface supergene mineralization.

On January 29, 2020, RNC announced that a high-density gravity survey had identified a newly interpreted structure extending over 5 km in length and 5 km north of the previously mined high grade underground Trident gold deposit. Trident was mined by the previous owners, Alacer Gold, producing over 1 million ounces. The new structure is considered to have high potential for mineralization and will be part of HGO’s 2020 exploration program.

On February 27, 2020, RNC announced the initial results from the 2020 exploration drilling program. Drilling at the Hidden Secret and Mousehollow projects returned strong results, driving the expansion of proposed open pit dimensions at both projects. Additionally, the ongoing review of the extensive historical database at Higginsville continued to return significant targets for future exploration including the high grade Aquarius Project located just 2.5 km south of the HGO plant.

Beta Hunt production is mainly focused on the Western Flanks and A Zone mining areas. A number of stoping areas are being developed within the Western Flanks that will access some of the wider Beta Hunt stoping blocks (up to 20 metres wide). Mining rates at Beta Hunt are currently 50,000-55,000 tonnes per month (up from 40,000-50,000 tonnes per month in 2019). This rate is expected to continue as part of the Beta Hunt expansion plan.

Adjusted EBITDA and Adjusted Earnings of $13.6 million and $12.6 million were up from $(0.2) million and $(0.4) million in 2019. During the first quarter of 2019, bulk mining was temporarily ramped down at Beta Hunt for drilling and there was no contribution from HGO which was acquired in June 2019.

Table 3 – Highlights of RNC’s Financial Position
(in thousands of dollars):

For a complete discussion of financial results, please refer to RNC’s MD&A and unaudited condensed interim financial statements for the three months ended March 31, 2020 and 2019.

The disclosure of scientific and technical information contained in this news release has been reviewed and approved by Stephen Devlin, FAusIMM, Vice-President, Exploration & Growth, Salt Lake Mining Pty Ltd, a 100% owned subsidiary of RNC, a Qualified Person for the purposes of NI 43-101.

RNC is focused on growing gold production and reducing costs at its integrated Beta Hunt Gold Mine and Higginsville Gold Operations in Western Australia. The Higginsville treatment facility is a low-cost 1.4 Mtpa processing plant which is fed at capacity from RNC’s underground Beta Hunt mine and open pit Higginsville mine. At Beta Hunt, a robust gold mineral resource and reserve is hosted in multiple gold shears, with gold intersections along a 4 km strike length remaining open in multiple directions. HGO is a highly prospective land package totaling approximately 1,800 square kilometers. In addition, RNC has a 28% interest in a nickel joint venture that owns the Dumont Nickel-Cobalt Project located in the Abitibi region of Quebec. Dumont contains the second largest nickel reserve and ninth largest cobalt reserve in the world. RNC has a strong Board and management team focused on delivering shareholder value. RNC’s common shares trade on the TSX and on the OTCQX market. 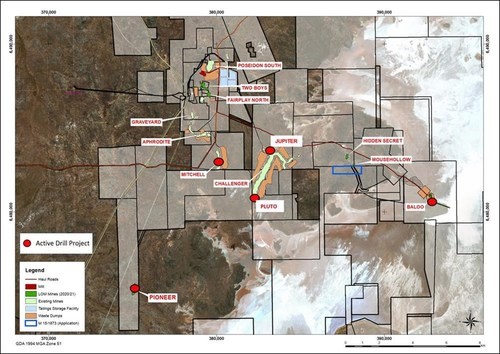