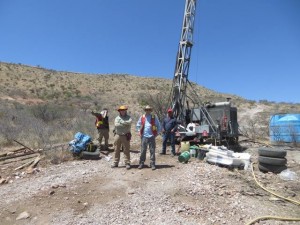 Riverside Resources Inc. (TSX VENTURE:RRI)(PINKSHEETS:RVSDF)(FRANKFURT:R99) is pleased to announce the signing of a three year, US$1.8M strategic exploration alliance with a wholly-owned subsidiary of Antofagasta Plc for generative exploration in the major copper belt of northwestern Mexico in the eastern part of the state of Sonora. The Alliance will focus on finding and developing new large copper deposits using Riverside’s extensive technical knowledge of copper systems and strong generative exploration team strategically based in Hermosillo, Sonora, Mexico.

Antofagasta will fund US$600,000 on an annual basis for three (3) years of generative grass-roots exploration within a defined exploration area covering eastern Sonora and parts of western Chihuahua and northern Sinaloa. The exploration area being explored by Antofagasta and Riverside is a continuation of the same belt that hosts more than 25 known deposits and mines north of the border in Arizona, and is also host to one of the world’s top 10 (and lowest cash cost) copper producers in Grupo Mexico.(1) Properties that are identified and deemed to be of interest will become Designated Properties whereby Antofagasta will have the opportunity to earn a 65% interest by completing a four year, US$5,000,000 work program. Once earn-in on a Designated Project (DP) is completed, a one-time payment of US$3,000,000 will be made to Riverside and the property will then be advanced under a joint venture agreement (65%-35%).

The Alliance will target properties containing primarily Cu with possible minor amounts of Au, Ag, Mo, Pb, Zn, Ni and PGM. All properties identified by Riverside under the Alliance that are not jointly pursued will then be available for Riverside to pursue on its own should Antofagasta decide it does not fit their strategic interests. All decisions relating to the Alliance will be made jointly by the Technical Committee with Antofagasta holding a tie-breaking vote while sole funding. Unless otherwise specified, Riverside will be the designated operator for all exploration activities of the Alliance. All property acquisitions will be in the name of Riverside’s wholly owned subsidiary and transferred to a jointly held company once selected as a DP.

“Riverside and Antofagasta have built a strong relationship during our work together in British Columbia, and we now look forward to applying a similar partnership framework to our joint exploration efforts within the prolific Laramide copper belt of northwestern Mexico, which is the continuation of the many large copper mines in Arizona and extends southward into Sonora where this Alliance will focus.”

Antofagasta and Riverside are already working in a generative grass roots exploration alliance in British Columbia where drilling is again set to commence in the second year of the BC Alliance. The Mexico Alliance with Antofagasta will draw from the vast databases, technical experience and Riverside’s exploration team and infrastructure already in place to rapidly deliver potential Designated Properties to Antofagasta for their evaluation for additional funding and advancement. Further details on the Riverside-Antofagasta Mexico Alliance will be available on the Company’s website shortly.

Projects selected as Designated Project’s will have deemed ownership of 51% and 49% for Antofagasta and Riverside respectively. Antofagasta would then have to spend a minimum of US$5,000,000 within four (4) years from the date the DP is chosen, with minimum annual expenditures as follows:

Riverside is a well-funded prospect generation team of focused, proactive gold discoverers with the breadth of knowledge to dig much deeper. The Company currently has approximately $6,000,000 in the treasury and 37,000,000 shares outstanding. The Company’s model of growth through partnerships and exploration looks to use the prospect generation business approach to own resources, while partners share in de-risking projects on route to discovery.

Antofagasta plc is a Chile-based copper mining group with interests in energy, transport and water distribution. It is listed on the London Stock Exchange and is a constituent of the FTSE 100 index. Antofagasta’s mining activities are primarily concentrated in Chile where it owns and operates four copper mines, which in 2012 produced 709,600 tonnes of copper, 12,200 tonnes of molybdenum and 299,900 ounces of gold. Antofagasta also has mining exploration, evaluation and/or feasibility programs in North America, Latin America, Europe, Asia, Australia, and Africa.