Riverside Reports on the First Phase of Drilling at the Cuarentas Gold Project, Sonora, Mexico

Riverside Reports on the First Phase of Drilling at the Cuarentas Gold Project, Sonora, Mexico

Riverside Resources Inc. (TSX-V: RRI) (OTCQB: RVSDF) (FSE: 5YY) is pleased to announce that drill results from the first four of nine holes drilled at the Cuarentas Project have been received and are reported below. The primary focus of this initial drill program targeted the Santa Rosalia area with a total of 9 holes (1,500 m). All drill holes intersected the mineralized structure along the 400 m strike-length. Drilling suggests some displacement has occurred between the high-grade surface sampling of old mining areas and the at depth drill intersections. The results have led Riverside to reinterpret this area and apply these findings to the other three target areas. From the first 9 exploration holes the best intercept was from drill hole LC20-001 which returned of 1.04 g/t Au over 3.44 m starting at 66.6 m down hole. Complementary exploration work carried out during the drill campaign show increasing promise for other target areas and will be reported once data review is completed.

Riverside’s President and CEO, John-Mark Staude, stated: “We are pleased to have drill-tested the Santa Rosalia target, which is only the first of four target areas along a 2.5 km mineralized trend. Results have demonstrated a structural complex environment that Riverside’s team is reviewing and using for refining and developing more targets that we look forward to testing in the coming months at Cuarentas.”

Post-mineral faulting of the high-grade surface vein (2.1 m @ 21.9 g/t Au) at the former Santa Rosalia mine has been intercepted with the drilling and the revised structural interpretation now shows some offset in mineralization. The drill core assays from this campaign returned anomalous base metals (Cu, Pb, Zn) as well as the minerals gypsum and pyrite which could relate to a nearby porphyry Cu style system. The Laramide age rocks at the property may host a higher temperature, porphyry Cu system laterally or at depth on Riverside’s mineral tenure. 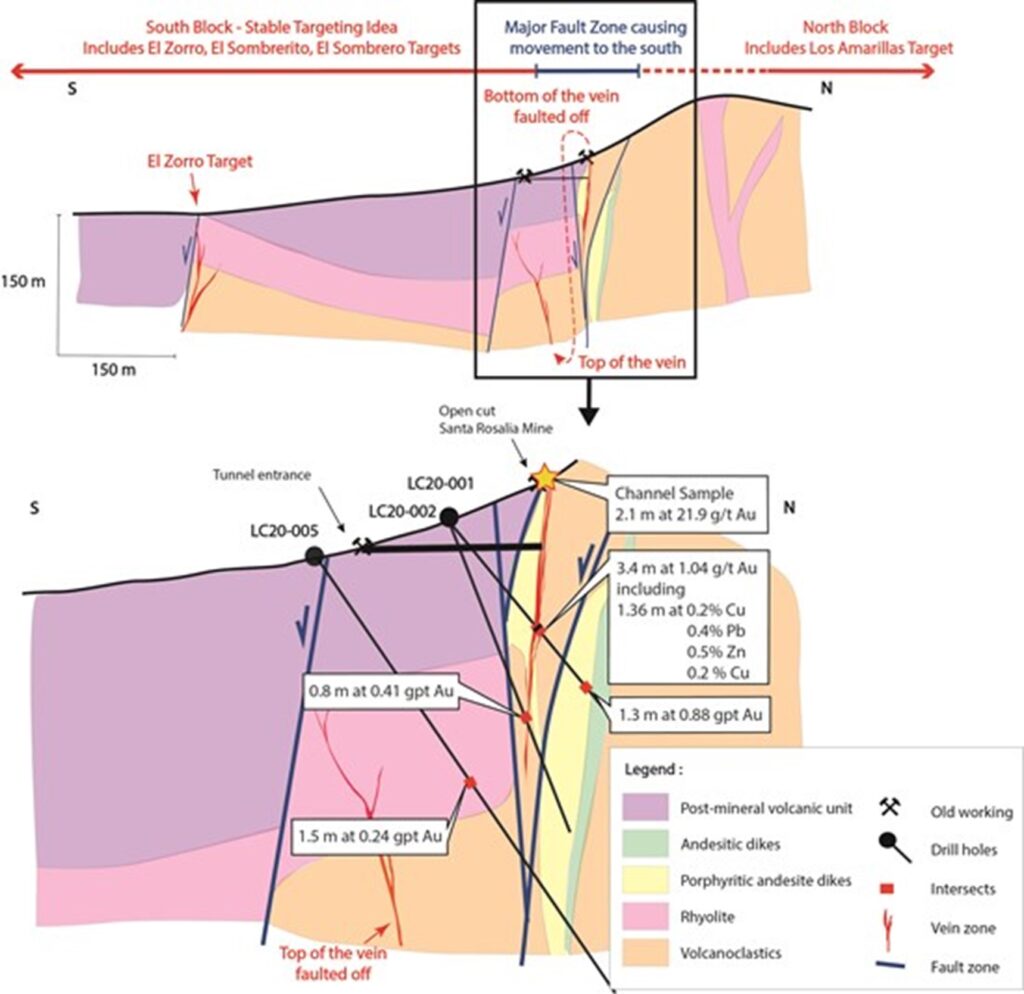 Figure 1: Interpretative cross section of Santa Rosalia Mine including drilling results from October and November 2020. Tilting of the down dropped blocks shows an angular offset from the faulted off vein. Channel samples taken by Riverside in 2020 (see press release October 8, 2020).

The geologic cross section from the Santa Rosalia drill program shows a post mineral fault not visible on surface that has offset the vein (see Figure 1 above). This displacement between the northern and the southern block can be tested with further drilling as it is believed the vein could be displaced downward on the south side of the Testerazo Fault zone. This type of structural modification by post-mineral Basin and Range tectonics is common in the region and will need to be incorporated into working models as exploration advances. At the Mercedes Mine immediately to the west, significant economic discoveries have been found along reactivated faults and adjacent to stable blocks beneath post-mineral cover and should be considered in future modelling at Cuarentas. At the Cuarentas Project, recent surface work has shown variable and relatively thin post-mineral volcanic cover within the southern block. This leads Riverside to believe that a preserved system exists within the block to the south. Evidence for this was discovered within erosional windows at lower elevations where high-grade gold samples are documented by historical explorers.

The other three targets at Cuarentas include the Sombrero, the Central and the Santa Rosalia targets, which have not been drill tested. These areas show extensive alteration, favorable geology, mineralization and will be part of a second phase of exploration drilling at the Cuarentas Project.

The scientific and technical data contained in this news release pertaining to the Los Cuarentas Project was reviewed and approved by Freeman Smith, P.Geo, a non-independent qualified person to Riverside Resources, who is responsible for ensuring that the geologic information provided in this news release is accurate and who acts as a “qualified person” under National Instrument 43-101 Standards of Disclosure for Mineral Projects.

Core samples collected at Cuarentas were taken to the Bureau Veritas Laboratories in Hermosillo, Mexico for sample preparation and fire assay analysis for gold and silver. The rejects remained with Bureau Veritas in Mexico while pulps were transported to Bureau Veritas’ laboratory in Vancouver, Canada for 45 element ICP/ES-MS analysis. A QA/QC program was implemented as part of the sampling procedures for the exploration program. For the drilling program standards, blanks and duplicate samples were inserted every 20 samples into the sample stream prior to the sample batches being sent to the laboratory in Mexico.

Riverside is a well-funded exploration company driven by value generation and discovery. The Company has no debt and less than 69M shares outstanding with a strong portfolio of gold-silver and copper assets in North America. Riverside has extensive experience and knowledge operating in Mexico and Canada and leverages its large database to generate a portfolio of prospective mineral properties. In addition to Riverside’s own exploration spending, the Company also strives to diversify risk by securing joint-venture and spin-out partnerships to advance multiple assets simultaneously and create more chances for discovery. Riverside has additional properties available for option, with more information available on the Company’s website at www.rivres.com.