RIVERSIDE HITS GOLD IN 8 OF 12 HOLES AT THE OAKES GOLD PROJECT IN THE GERALDTON GOLD BELT, ONTARIO, CANADA

RIVERSIDE HITS GOLD IN 8 OF 12 HOLES AT THE OAKES GOLD PROJECT IN THE GERALDTON GOLD BELT, ONTARIO, CANADA

Riverside Resources Inc. (TSX-V: RRI) (OTCQB: RVSDF) (FSE: 5YY), is pleased to report assay results for the remaining 7 drillholes of its twelve-hole, 1700-meter diamond drill program completed at the Oakes Gold Project in northwestern Ontario, Canada. The primary focus of the first drill program at Oakes was to test the ‘HG’ Target identified by geophysics and trenching programs for gold grades and continuity. The results came back favorable with hole 22-11 returning 5 intervals of gold over a total interval of 55 meters and hole 22-06 returning 4m @ 1.7 g/t Au. The Induced Polarization (IP) work conducted by Riverside in the summer of 2021 showed the HG IP Target extended westward beyond the area of trenching and sampling. Drilling this year has now confirmed the gold continuity of over 1.2 kilometer strike, hitting the mineralized structure and further open in both east and west.  The drill results announced here fit with the orogenic gold model and further drilling can be progressed with confidence as all the holes of this program were shallow, with intercepts at less than 120m for most cases, while the system is wide open at depth.

This drill campaign has now successfully expanded the known gold mineralization well beyond the outcrops and laid the groundwork for the next drill campaign to continue expanding the Oakes gold camp. IP data provided strong conductivity and complimentary resistivity anomaly trending roughly east-west parallel to the geological units with greater confidence. The 7 holes announced here intercepted favorable geology of metavolcanics, “greenstone”, consistent with the geology noted in the first five holes and further geological constraints. As this part of Oakes has never been drilled, the first drill program comprised of shallow holes with the intent of intercepting the target at 100 m vertical below surface. The mineralized zone on surface is known to pinch and swell and averages about 5 m in width. The best hole in the second batch of reporting was DDH-22-06 which returned 1.7 g/t over 4 m with one sample being almost 5 g/t gold. The best intercept in the program was 8.4 g/t over 1 m in Hole #2.

All samples comprised half-core, saw-cut samples with QA/QC described below and further at www.rivres.com. Samples are generally considered to be 90-95% to true width.

DDH-22-06 & 07 were designed to intercept the HG Zone beneath Trench 1 at about 100 m depth. The target zone comprises strongly foliated, fine grained, metavolcanic rocks showing strong silicified zones with narrow bleached sections. Alteration comprises abundant biotite and chlorite bands, the top of the unit shows quartz veining with semi-massive pyrite-pyrrhotite and trace chalcopyrite which generally described the mineralized environment at Oakes. Quartz carbonate veinlets and stringers are more frequent from 80 m to 110 m down the hole consistent with the drill target gold bearing area. The overall 25-30m mineralization halo and main zone which is near vertical, now demonstrates strong consistency and provides the Company confidence of a significant gold system at Oakes. DDH-22-08 hit a fault and could not reach the target. DDH-22-09 was the setback collared to drill the Brinklow IP anomaly south of HG Zone, while DDH-22-10 was collared on the Crib Road with the intent to test the IP anomaly associated with the metasediment/metavolcanic contact boundary mapped at this location. Holes 8, 9 and 10 were not intended to evaluate the HG target and were instead testing parallel features. Holes 6, 7, 11, 12 provide technical data specific to the HG trend and give positive results for further exploration at Oakes which lies 25 km east of the Hard Rock Mine currently being constructed by Greenstone Gold (Equinox Gold) with a Proven & Probable Reserves of 5.5Moz at 1.27 g/t Au.[1] 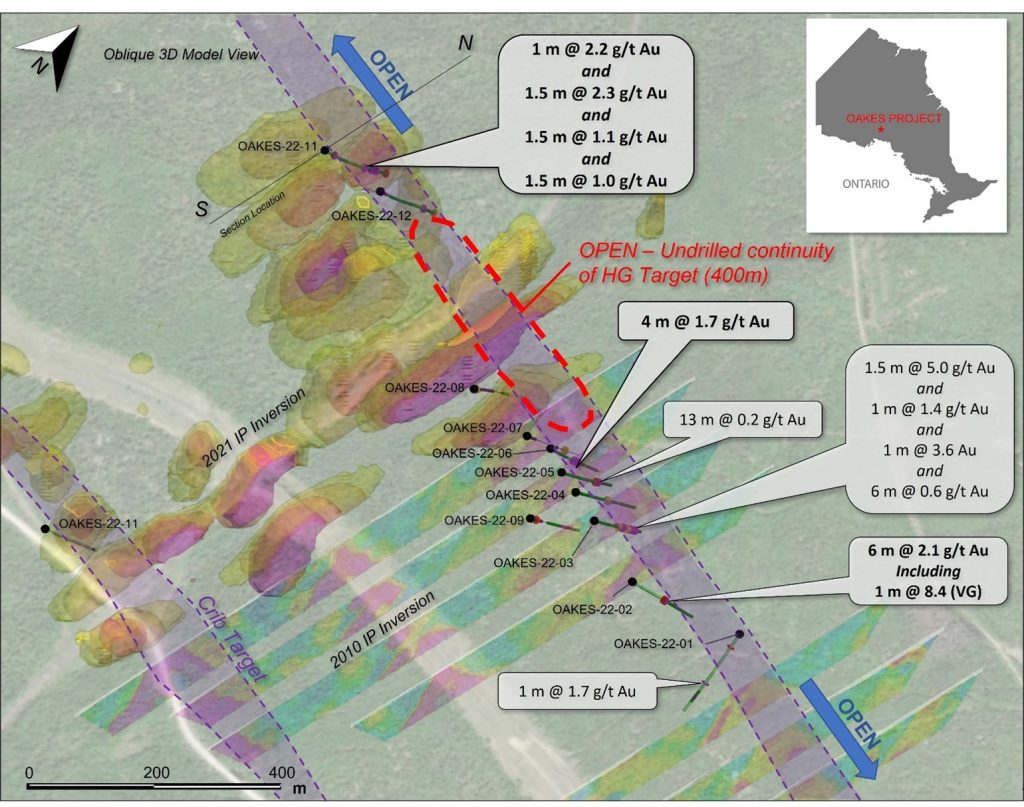 DDH-22-11 was targeting an IP conductivity anomaly associated with the HG Zone on trend with the mineralization defined on surface (and in drill core) at Hole 6 located 600 m to the east along what is believed to be the same structure. Assays returned gold results associated with veining throughout the hole and as high as 2.3 g/t gold.  Hole 11 was collared in metasedimentary rocks and drilled northward into metavolcanic rocks. Bedding and the contact between the two units was measured at 50 degrees to the core axis whereas foliation and shearing is at about 45 degrees. Alteration comprises moderately to strong biotitic and weak to strong chlorite zones sometimes associated with carbonate zones. Quartz veining and silica content increases starting at 80 m downhole. Sulphides are associated with quartz veins and comprise 2-5% disseminated Pyrite-Pyrrhotite seen within local fracture fillings and stringers. 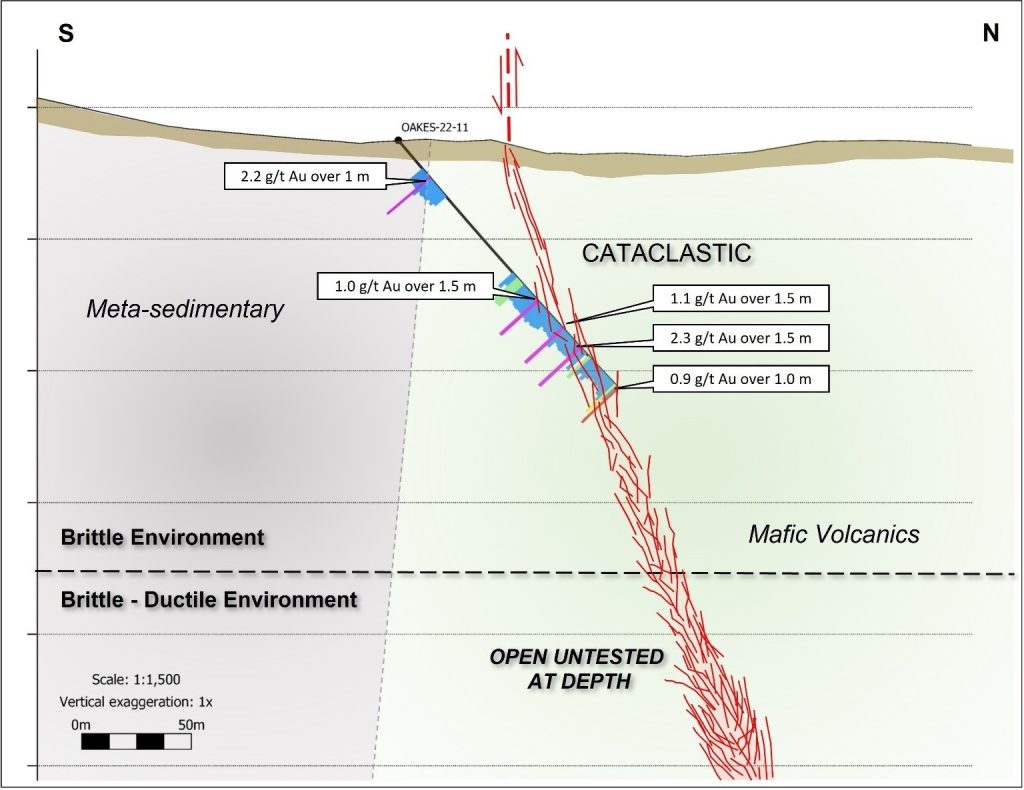 Figure 2: Interpreted North – South Cross Section DDH-22-11 demonstrating the progression from brittle down into brittle-ductile deformation as the targeting model having found gold over 55m drill width zone in hole 11

DDH-22-12 was collared in gabbro and drilled north through metasedimentary rock into metavolcanics. Mineralization is noted within similar altered rock but only within shears in the mafic volcanics and does not appear to be associated with the contact zones. Sheared zones commonly a focus for gold mineralization in orogenic systems like this one are expressed as altered, fine-grained, metavolcanics with moderate to strong chlorite-biotite alteration with quartz-carbonate veins and stringers with 1-2% disseminated pyrite and pyrrhotite.

The HG Zone at Oakes has been proven to extend well beyond the strike extent defined by trenching and has now been drill proven to at least 1.1 km in length. To date the drilling has only tested the upper 100 m of the structure where mineralization appears associated with quartz veins that show visible gold within pyrite rich veins. The gold mineralization is associated with quartz and quartz-carbonate veins in shear zones within metavolcanic rocks often (near-vertical which can bode well for potential future mining and predicting the next round of drilling). Quartz veins that are subparallel to foliation appear to be the veins that carry gold and are cut by later quartz carbonate veins that do not have sulfides. The quartz veins are mostly associated with brittle type fracturing with lesser semi-ductile type, potentially indicating that drilling was approaching the upper brittle-ductile transition which can be highly favorable in large orogenic gold deposits. The nature of the fracturing suggests that the shallow drilling is primarily within the upper brittle deformation zone as shown in Figure 2. The fact that the gold veins can now be traced in drill holes more than 3x beyond the previous surface trenching expands the Oakes project potential greatly.

The Oakes property is located along the general metallogenic boundary of the Wabigoon and Quetico sub-provinces and this boundary is commonly a major fault breaks, and large gold resources are associated with these breaks generally in secondary shear zones in the Canadian shield geologic provinces. The Hemlo Gold Mine to the south is hosted in a brittle fracture environment and the Black Fox gold mine to the east in Matheson is hosted in a semi-ductile fracture system at depth and more brittle near the surface. Riverside sees the potential for brittle fracture zones progress into semi ductile and ductile zones at depth in general becoming wider and potentially richer as has commonly been found and further drilling is warranted.

Riverside’s President and CEO, John-Mark Staude: “Riverside has expanded the gold zone at Oakes along strike over 1 km and begun showing the continuity on surface and to depth, consistent with the goals for the 2022 drill program. Next steps will include more geophysics to map the structural features to trace the HG Zone and gold mineralization. We are very encouraged by these good results covered in this and the prior news release and are pleased to see how effective the geophysical surveys were at finding mineralization and predicting extensions. Moreover, we remain very cautiously optimistic to see our first program of shallow drilling demonstrate continuity of mineralization along strike and at depth. Riverside continues to pursue the Prospect Generator hybrid model, by providing shareholders with the upside for discovery on multiple projects, and with different partners, along with the current self-funded value adding project.”

The scientific and technical data contained in this news release was reviewed and approved by Freeman Smith, P.Geo., a non-independent qualified person to Riverside Resources, who is responsible for ensuring that the geologic information provided within this news release is accurate and who acts as a “qualified person” under National Instrument 43-101 Standards of Disclosure for Mineral Projects.

Riverside is a well-funded exploration company driven by value generation and discovery. The Company has over $4M in cash, no debt and less than 80M shares outstanding with a strong portfolio of gold-silver and copper assets and royalties in North America. Riverside has extensive experience and knowledge operating in Mexico and Canada and leverages its large database to generate a portfolio of prospective mineral properties. In addition to Riverside’s own exploration spending, the Company also strives to diversify risk by securing joint-venture and spin-out partnerships to advance multiple assets simultaneously and create more chances for discovery.