Hole JANL0028 drilled in the winter program intersected 0.89% copper and 8.02 g/t silver over 14 metres from 246m to 260m, including 6m of 1.67% copper and 13.6 g/t silver from 254.1 to 260.1m (see Rio Tinto intersects 14 meters of 0.89% copper and 8 g/t silver including 6 meters of 1.67% copper and 13 g/t silver at Forum’s Janice Lake Copper/Silver Project, Saskatchewan news release dated June 9, 2021). Hole JANL0037 was later drilled to determine the orientation of the mineralized fault intersected in holes JANL0028 and 0032. Assays are pending. Results of the regional prospecting and mapping campaign this summer over the 52 km extent of the Janice Lake Copperbelt and from drill holes JANL0035 to 0039 are expected in November. 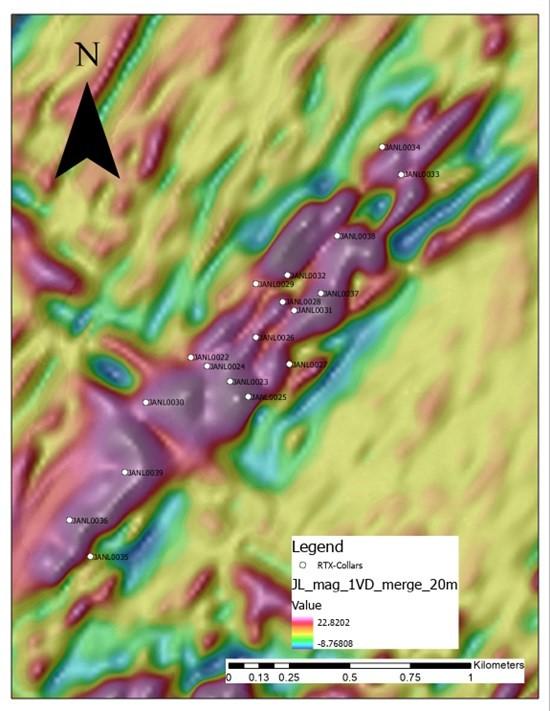 Figure 1: Plan Map of the Rafuse Target. Background is from the airborne magnetic survey, with red colours indicating magnetic highs. Holes JANL0022 to 0030 were drilled by RTEC during the winter of 2021 and Holes JANL0031 to 0039 were drilled in the summer of 2021. 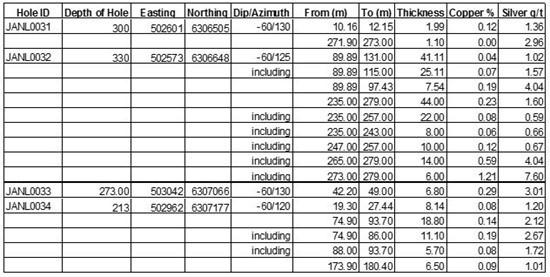 Core samples were sawed in half, keeping the half with the reference line for orientated core in the box. Samples averaged 2 metres in length through the mineralized zone, 4 metres in length in the unmineralized zone, however these lengths varied depending on stratigraphy, alteration or mineralization. Standards were introduced after every 20th sample, using a high grade, low grade or unmineralized, depending on the surrounding core. Duplicates were also introduced on every 20th sample, quartering the core. Blanks were used for the first sample of the hole and at the beginning and end of a mineralized interval, using certified rose quartz. A 4-acid digestion was used on the samples at ALS lab in Vancouver, followed by analysis by ICP-MS (the ME-MS61L package).

Ken Wheatley, P.Geo., Forum’s VP, Exploration and Qualified Person under National Instrument 43-101, has reviewed and approved the contents of this news release.

Forum Energy Metals Corp. has three 100% owned energy metal projects that were drilled in 2021 by the Company and its major mining company partners Rio Tinto and Orano for copper/silver, uranium and nickel/platinum/palladium in Saskatchewan, Canada’s Number One Rated mining province for exploration and development. Forum is well funded and plans an aggressive drilling campaign in 2022. In addition, Forum has a portfolio of seven drill ready uranium projects and a strategic land position in the Idaho Cobalt Belt.