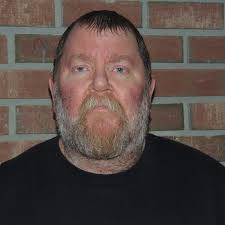 Energy demand growth will be led by China until the mid-2020s, with India then replacing China as the main energy consumer out to at least 2040.

The WEO 2014 report also states there were 437 operating nuclear reactors with total installed capacity of 377,728 MWe (fuel consumption per GWe is 192 tonnes U3O8 ) accounting for 11% of global electricity generation.

According to the IEA nuclear’s share of electricity generation increases to 12% with total capacity increasing 60% to 624 GWe by 2040 this despite 200 reactors are expected to be retired by that time.

The largest increases in nuclear energy generation are expected in China, India, South Korea, and Russia. The number of countries operating reactors is expected to increase from 31 in 2013 to 36 in 2040.

“Industry experts project that, given the number of new reactors planned and the world-wide growing demand for electricity, the demand for uranium will grow significantly over the next decade…

The World Nuclear Association predicts that by 2020, mined production will account for 90% of global uranium supply, compared to 75% today…

By 2020, China alone will consume the equivalent of one-third of today’s global uranium market. China and Russia have already begun aggressively buying up huge stakes in uranium mining operations around the world in order to stockpile uranium to meet their rising domestic demand.” Virginia Uranium Inc.

Pre-Fukushima, Japan’s nuclear reactors supplied up to 30% of the country’s electricity. Analyst reports predict as many as 19 Japanese reactors will have been restarted by the end of 2016 amounting to roughly 14.5M lbs. of annual U3O8 demand.

Based on the most recent statistics from the World Nuclear Association, there are a total of 253 reactors that are either under construction, or planned around the world. Prior to the Fukushima incident in February 2011, there were only 218 reactors under construction or planned.

Ux Consulting company LLC or UxCo, in its “Uranium Market Outlook – Q1 2014” estimated that by 2030 there will be 609 nuclear reactors in operation worldwide in 41 countries, supplying 588 gigawatts of electricity. UxCo also estimated that uranium demand will grow from 172.1 million pounds of U3O8 in 2013 to 265.0 million pounds in 2030.

The U.S.’s 99 operating reactors (with 5 under construction) consume approximately 50 million pounds of uranium each year. However, the U.S. produces less than 5 million pounds and imports over 90 percent of the uranium it uses. 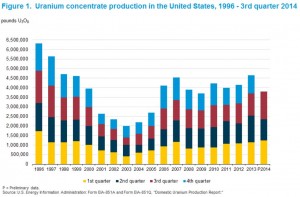 According to the World Nuclear Association, January 2014:

Russia and the U.S. signed a new uranium supply contract (in 2011) to replace the soon to be ending Megatons to Megawatts™ Program. A significant part of U.S. reactor fuel will now come from Russia’s commercial enrichment activities, using U.S. supplied feedstock, rather than the down blending of Russian weapons material. This new agreement means US has to source additional new uranium, deliver it to Russia for Russia to enrich, and then buy the resulting LEU.

By 2015, supplies to the USA are expected to be half the level supplied under the prior Megatons to Megawatts Program (the option exists to supply up to the same level), the new program is expected to continue until 2022.

Russia is a major player in the secondary (reprocessing) uranium market. However, with banking sanctions in place (and more being proposed), Russia is being squeezed out of international money markets. On Monday, 26th of January 2015, ratings agency S&P cut Russia’s sovereign credit rating to BBB-, just a cut above junk bond status. Moody’s downgraded Russia the proceeding week with the warning that further hits to the Kremlin’s credit rating are on the way. Many are convinced the Russians are going to have an increasingly hard time making fuel deliveries.

Building a U.S. Based Uranium Powerhouse

Energy Fuels (NYSE MKT: UUUU) has recently announced a proposed acquisition ofUranerz (NYSE MKT: URZ). Under the terms of the all-stock transaction, URZ shareholders receive 0.255 shares of UUUU for ownership of 55% in the combined company, Energy Fuels shareholders will own the remaining 45%.

URZ’s Dennis Higgs, Glenn Catchpole and Paul Saxton have been nominated to the BoD of a new Energy Fuels.

Combined 2015 uranium sales are projected to be ~1MM lbs at $58/lb. The merged company will have a total of six separate uranium supply contracts with terms extending to 2020.

The merger is expected to close in mid 2015 following regulatory and shareholder approvals for both companies.

Is a U.S. based uranium powerhouse on your radar screen?

If not, it should be.

Richard does not own shares of Uranerz Energy Corp. or Energy Fuels.