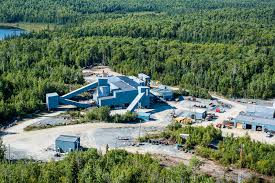 Richmont Mines Inc. (TSX:RIC) (NYSE MKT:RIC), is pleased to announce that it is commencing an additional exploration drilling program from surface to test part of the down plunge projection of the Island Gold deposit. This is in addition to the remaining budgeted 2014 exploration and definition drill programs currently underway from underground. The new program will consist of four diamond drill holes for approximately 4,800 metres at an estimated cost of $0.5 million.

The Island Gold Mine, near Wawa Ontario, has produced over 300,000 ounces of gold from above the 400 metre level, and is expected to produce over 40,000 ounces this year. The Corporation commenced more intensive drilling at depth below the mine in 2011 with favourable results driving an expanded drilling program through 2012. In February 2013, the first estimate was announced for a new 508,000 ounce inferred resource grading 10.73 g/t Au directly below the existing Island Gold Mine. Additional drilling in 2013 resulted in a doubling of this resource estimate one year later in January 2014 to 1.1 million ounces grading 9.3 g/t Au. The deposit remains open along strike and at depth, which presents good potential for expanding the resource through additional exploration. As this new deposit is immediately beneath the operating mine, Richmont has extended the mine ramp to its current depth of 625 metres, which is in the upper 125 metres of the new zone.

Elaine Ellingham, Interim CEO stated, “This new 1.1 million ounce resource under our operating Island Gold Mine came together very quickly. It remains open at depth and along strike, presenting some compelling potential for expanding this resource. These additional exploration drill holes will enable us to test the down plunge potential to the east of our existing resource base at depths of between 800 and 1,000 metres.”

“The Island Gold Mine lies within a highly prospective regional gold-rich structure that also hosts Argonaut’s 5.2 million ounce low-grade Magino resource, located less than 2 km along strike to the west. We expect to continue our exploration through 2015 and likely into 2016, in order to test the full upside potential of the deposit, as this information will be important to determine the optimal longer term development for the mine. At the same time, as previously reported, we have already extended the ramp into the upper portion of this new zone and commenced development. We expect to be mining from the first stope in this lower zone later this year.”

The recently approved 4,800 metre exploration drill program (approx. 4 holes) is expected to commence shortly. This program is designed to test the down plunge extension of the deposit between 800 and 1,000 metres of depth, at a total cost of approximately $0.5 million. This is in addition to 3,000 metres of drilling (approx. 4-5 holes) planned from underground that will test the area immediately east of the known deposit below the 800 metre level. An additional 9,800 metres of definition drilling is underway in a number of areas of the mine, as per the 2014 plan, and is expected to contribute to upgrading some of the inferred resources into the measured and indicated resources before year end. Please see the attached longitudinal for details.

Richmont Mines has produced over 1.4 million ounces of gold from its operations in Quebec, Ontario and Newfoundland since beginning production in 1991. The Corporation currently produces gold from the Island Gold Mine in Ontario, and the Beaufor Mine and Monique Mine in Quebec. The Corporation is also advancing development of the extension at depth of the Island Gold Mine in Ontario. With over 20 years of experience in gold production, exploration and development, and prudent financial management, the Corporation is well-positioned to cost-effectively build its Canadian reserve base and to successfully enter its next phase of growth.