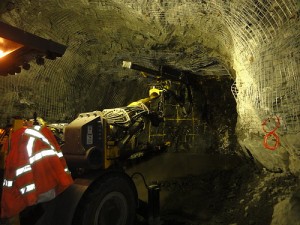 VMS Ventures Inc. (TSX VENTURE:VMS) is pleased to update shareholders on the progress made at the Reed Copper Project, near Flin Flon Manitoba. VMS Ventures owns 30% of the project and is carried to production. Hudbay Minerals Inc. (TSX:HBM) (NYSE:HBM) owns 70% and is the Operator.

VMS Ventures announced today that joint venture partner and operator Hudbay has received the Environment Act Licence for the Reed Copper Project from the Manitoba government and has commenced initial production. The licence permits the operation of the Reed mine, a 1,300 tonnes/day underground copper mine, and its supporting infrastructure.

Full production remains on the planned schedule to commence in first half of 2014 and the project remains within the estimated budget parameters.

Neil Richardson, VMS Ventures’ COO states: “The receipt of the Environment Act Licence and the successful extraction of the bulk sample are both significant milestones for the project. The Licence confirms the care and diligence taken by our JV partner and operator Hudbay in moving the project forward within mandated environmental guidelines while the extraction of the bulk sample project is the first step towards full production at Reed”.

VMS Ventures Inc. is focused primarily on acquiring, exploring and developing copper-zinc-gold-silver massive sulphide deposits in the Flin Flon-Snow Lake VMS Belt of Manitoba. The Company’s VMS project property portfolio consists of the Reed Copper Project, which is subject to a 70-30 JV with Hudbay Minerals and is scheduled for production in Q4-2013, Copper Project, McClarty Lake Project, Sails Lake Project, Puella Bay Project and Morton Lake Project. Outside of the Snow Lake camp, the Company holds massive sulphide prospective properties near the past producing Fox Lake and Ruttan copper-zinc mines, near the communities of Lynn Lake and Leaf Rapids in northern Manitoba. These properties are located in the mining friendly province of Manitoba, Canada. The Company also has optioned the Black Creek property in the Sudbury mining camp.