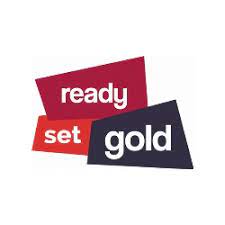 All seven holes have intersected gold mineralization within the A, B and C zones in areas with limited historical drilling.

The Northshore project remains underexplored with only ~5% of the area systematically evaluated. Additionally, the depth potential of the gold mineralized zones remains untested with the deepest drill intercepts at 250-300m. The Company believes that the Northshore property shows excellent potential at depth including the potential for high-grade gold zones. 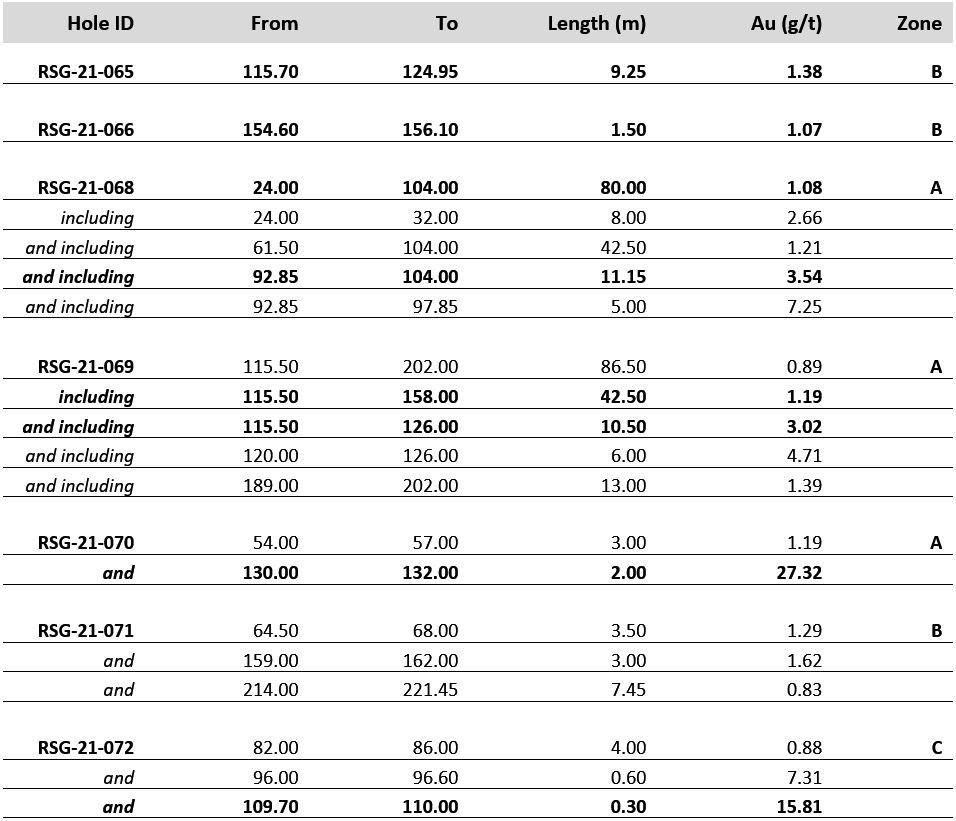 Holes RSG-21-068 and RSG-21-069 were drilled to crosscut the gold-bearing zones in Zone A in a manner that conforms with the new geological model as illustrated in Figure 1. Both holes intersected significant widths of higher-grade gold mineralization, which indicates the potential of higher-grade, continuous zones within Zone A that were not properly interpreted with historical drilling. Historical drilling for the most part, was oriented sub-parallel to these zones and only targeted one vein orientation. The results of both holes will aid in better understanding how to grow Zone A at depth and along strike.

RSG-21-065, 066 and 071 were all drilled in a south to north direction into the B Zone Structure and are continuing to give the Company confidence in the continuity of this newly modeled northwest-southeast Zone. Further systematic summer/fall field work will help to continue to understand the structural controls on high-grade gold mineralization within Zone B. RSG-21-066 was a 70m step-out to the northwest along the B-zone in an area with no historical drilling and intersected gold-bearing prospective rock.

RSG-21-072 was drilled into the newly interpreted C-zone which has limited historical drilling. The holes intersected several horizons of high-grade and anomalous gold-mineralization within strongly altered and fractured host rock with intense quartz veining. Further surface work this summer/fall is planned on this area to better understand structural controls on high-grade mineralization as well as strike potential.

Brad Lazich, VP of Exploration comments; “These drill results, in addition to those previously reported, continue to increase our confidence in the results of the historical drilling and our new geological model. The information that is provided by the Phase I drill program will now be used to help plan a systematic surface exploration program. This will aid us in developing the Phase II drill program, which will continue testing the different zones along strike and at depth.”

Christian Scovenna, CEO & Director comments; “We are extremely happy to report that all holes drilled in Ready Set Gold’s first drilling campaign encountered gold mineralization. The intersecting of broad intervals of gold mineralization hosting higher-grade structures is showing us that our understanding of Northshore and our new geological model is certainly progressing in the right direction. What is also greatly exciting for Ready Set Gold and our shareholders, is that our modelling indicates that the mineralization may be open along strike and at depth. By considering a different model of mineralization than previous operators of the project we have potentially unlocked the door to a regionally significant deposit. As very little of the historic drilling has occurred below 250m at Northshore and along strike in our modeled mineralized zones we look forward to completing the next phase of surface exploration and plan for drilling that we hope will continue to expand the known zones and potentially identify new ones.”

With the Phase 1 maiden drill program now complete the company is planning a systematic surface exploration program at Northshore, which will commence once ground conditions improve. The results of Phase 1 drilling have helped the company establish a new geological model for Northshore, confirmed areas of low drill density within the historic resource estimate and have proven the continuity of the newly modeled zones. These results along with the planned near-term exploration program will aid in designing a Phase II drill program to target growth of each zone along strike and at depth focusing on areas that host higher-grade potential. The near-term surface exploration program will consist of more detailed lithological and structural mapping, sampling, and trenching at targeted areas. The objective of the surface program will be to continue to develop the geological model at Northshore and gain an even better understanding of the structural controls on higher-grade within each of the zones. The company is expecting to release a market update with further details on the objectives and deliverables for said program in the near-term. 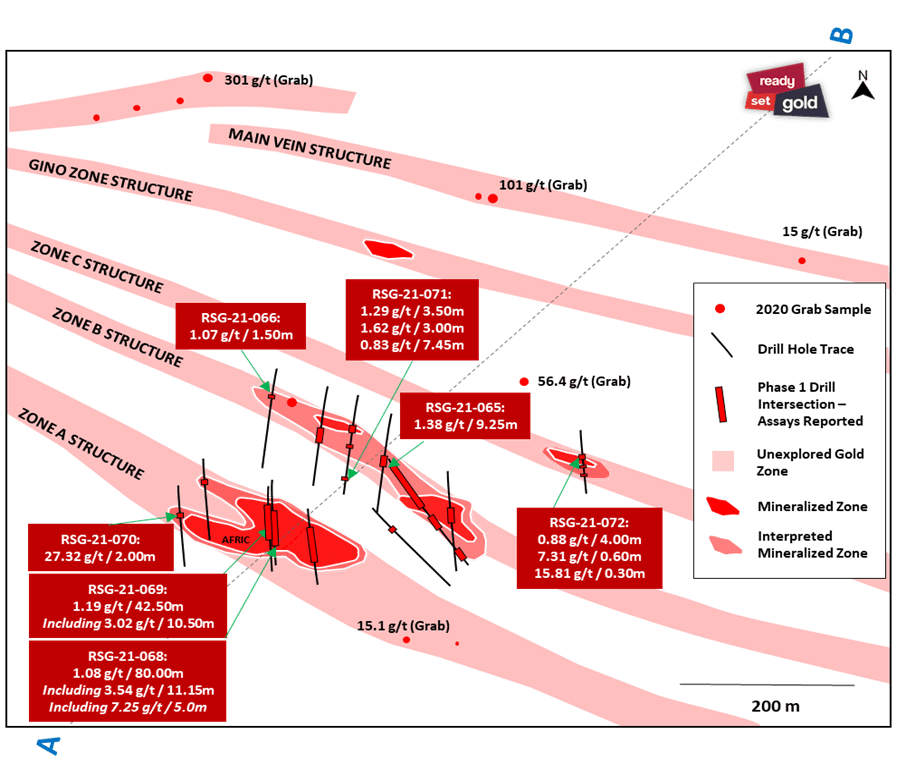 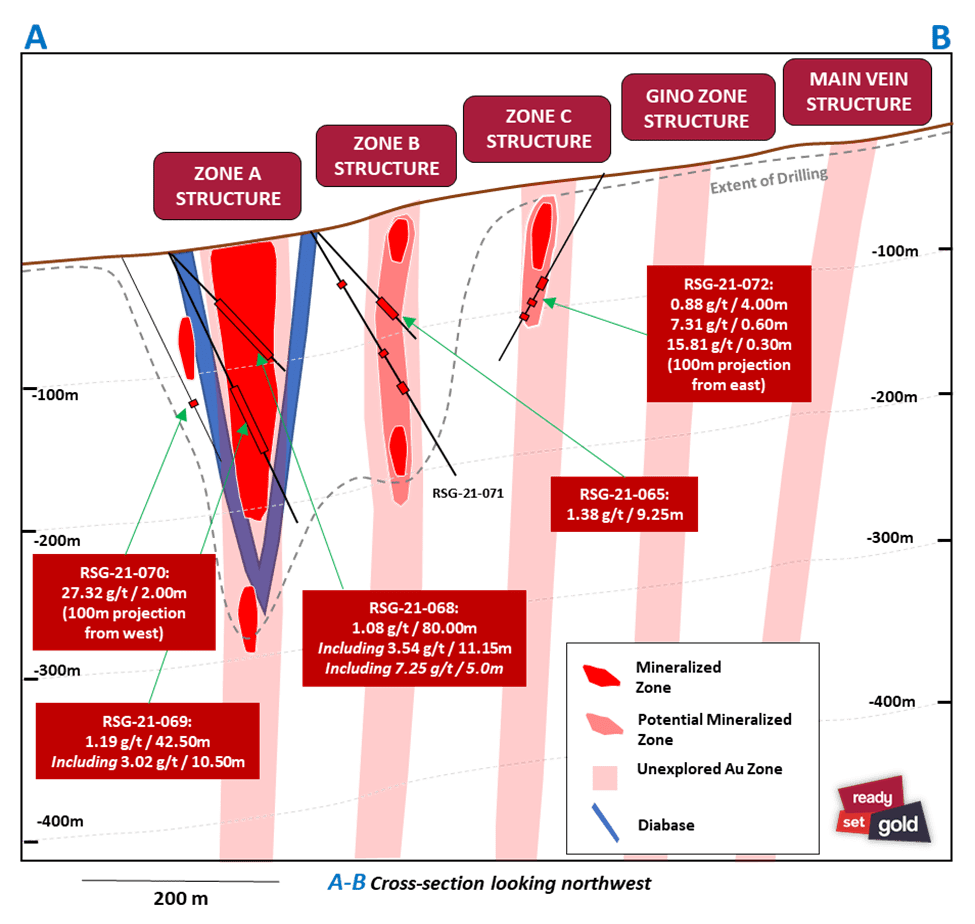 As a result of Ready Set Gold’s new geological model for Northshore the Afric zone has now been divided into Zones A, B and C. This interpretation better fits the modelled lithological and structural controls on the gold mineralization at Afric and will aid the company in growing the resource. Therefore, going forward, we will refer to Zones A, B, C, Gino and Main Vein as the gold bearing zones at Northshore.

“A” Zone – hosts a wide, potentially open pit target, with pervasive gold mineralization over significant widths with multiple higher grade-lenses. The zone is characterized by brittle-ductile shearing hosting pervasive quartz-carbonate veining with sulphide mineralization in stock-work veins, disseminated in host lithologies, and in shear-extensional and extensional quartz veins. The A zone has only previously been explored to approximately 200-250m depth and is also believed to be open along strike for more than 1km in both directions.

“B” Zone – a newly modelled zone that is geologically similar to Zone A (wide, lower grade gold zones hosting higher grade lenses within the broader envelope). The B Zone is 150m north of the A Zone and is interpreted as a parallel structure with a generally east-west strike. The zone is characterized by areas of intense alteration and brittle-ductile shearing defined by pervasive quartz-carbonate veining which hosts sulphide mineralization disseminated in host lithologies and in shear-extensional and extensional quartz veins. The zone remains underexplored and is believed to remain open along strike for more than 1km in both directions.

Additional Zones to be Explored: At least three gold bearing zones to the north of the A and B zones remain underexplored. The C, Gino and Main zones are modelled to be sub-parallel to the A and B zones and have the potential to significantly increase the scope of the Northshore project.

Drill core is logged and sampled in a secure core storage facility in Schreiber, Ontario. All samples are cut in half using a diamond saw and shipped to SGS in Sudbury, Ontario for sample preparation. All samples are analysed for gold by SGS using standard Fire-Assay AA techniques. Samples identified with visible gold are also analyzed with up to 1kg metallic screen fire assay. Certified standards and blanks are inserted routinely as part of Ready Set Gold’s quality assurance/quality control (QA/QC) program. No QA/QC issues were noted in the results referenced in this release.

Brad Lazich, P.Geo. (ON), VP Exploration of Ready Set Gold Corp, and a Qualified Person as defined by National Instrument 43-101, Standards of Disclosure for Mineral Projects, has verified the disclosed data and has approved the scientific and technical disclosure in this news release.

Ready Set Gold Corp. is a precious metals exploration company listed on the Canadian Securities Exchange under symbol RDY and the Bourse Frankfurt Exchange as 0MZ. The Company has consolidated and now owns a 100% interest in the Northshore Gold Property, located in the Schreiber-Hemlo Greenstone Belt near Thunder Bay, Ontario which is prospective for gold and silver mineralization. The Company also owns a 100% interest in two separate claim blocks totaling 4,453 hectares known as the Hemlo Eastern Flanks Project. The Company also holds an option to acquire a 100% undivided interest in a continuous claim block totaling 1,634 hectares comprising the Emmons Peak Project located 50 km south of Dryden, Ontario that is near the Treasury Metals Goliath and Goldlund advanced gold development projects.