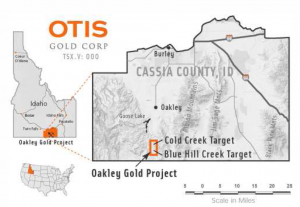 Radius Gold Inc. (TSX-V:RDU) (OTCBB:RDUFF) is pleased to announce that it has signed an agreement for the right to acquire a 70% interest in the Blue Hill Gold Project from Otis Gold Corp (TSX-V:OOO).


The Property hosts an epithermal hot-spring gold exploration target, is drill-ready, road-accessible, and is located in southeast Idaho, 24 km south of the town of Oakley and 4 km north of the Utah border. The property package consists of 36 federal lode mining claims located on federal land (comprising 295 hectares), and one Idaho State lease (comprising 33 hectares).

In July 2008, Otis completed a program of geologic mapping and sampling, as well as contracting Zonge Geosciences Inc. to perform a controlled-source audio magnetotelluric  geophysical resistivity survey over the target. Based on the results of Otis’ work program, drilling was proposed but never carried out.

Gold mineralization on the Property was first discovered by geologist Stan Dodd and Meridian Minerals in 1985. Alteration and gold mineralization are hosted by capping chalcedonic sinters and strongly silicified tuffaceous rocks in the Cenozoic-aged Salt Lake Formation, which consists of epiclastic, sedimentary and tuffaceous volcanic rocks overlying older Paleozoic and Precambrian basement rocks. The area of sinter exposed at surface is approximately 1 km by 0.5 km in area, and contains surface gold-in-sinter concentrations of up to 2 ppm. Mineralization appears both disseminated in sinter and related to north- and northeast-trending, high-angle structures within a northwest trending graben. Local, post-mineral, northeast-trending faulting has displaced and buried mineralized sections to the northwest, some of which have yet to be drill tested.

Two drill programs were completed in the past: the first in 1986-1987 by Meridian, and the second in 1998 by Latitude Minerals Corp. Both programs were designed to test the Property for the presence of an economic low-grade, bulk-tonnage, near-surface target. A total 3665 m of drilling in 29 drill holes was carried out on the Property. The drill holes were all reverse circulation, with the exception of one core hole in the 1998 campaign. Drill results confirmed the presence of significant near-surface thicknesses of sinter-hosted epithermal hot-spring-type gold mineralization. Mineralization is characterized by various forms of clay, silica and 1 to 5 % primary fine-grained pyrite, now mostly oxidized to various iron oxides.

Radius’ interpretation of the 2008 CSAMT survey results indicates the presence of several resistivity anomalies that are highly suggestive of structural feeder systems to the hot-spring sinter:

Radius’s geologists believe the Property has significant potential for high-grade veins or vein breccias at depth below or near the mineralized sinters and associated with one or more of the geophysical features discussed above. These constitute the Company’s exploration target on the Property. The presence of abundant sinter with anomalous concentrations of gold is unusual in hot-spring environments, and highly encouraging of targeting a deeper high grade feeder system. Importantly, none of the previous drilling has focused on the potential for high grade feeders associated with the mineralized sinters, and this represents a significant exploration opportunity for Radius.

The President and CEO of Radius, Simon Ridgway, commented: “I see similarities between the Blue Hill Project and our Cerro Blanco discovery in Guatemala. The surficial sinters at Cerro Blanco carried grades similar to those found at Blue Hill, up to about 1 g/t Au. The CSAMT survey at Cerro Blanco showed clear resistivity anomalies we interpreted as feeders, and this proved to be the case when we drilled. We encountered much higher grade mineralization below the sinter. The resource at Cerro Blanco (currently owned by Goldcorp Inc.) consists of an Indicated 1.27 Moz of Au (2.52 Mt grading 15.64 g/t Au), and an Inferred 0.67 Moz of Au (1.35 Mt grading 15.31 g/t). Our intentions with the Blue Hill Project are to follow a similar workflow and see whether analogous high grade mineralization exists below the sinter on the Property.”

Cautionary statement: The Cerro Blanco resource is quoted from “Resources and Reserves, Goldcorp Inc., December 31, 2013”, and has not been independently verified by Radius or its QP. The reader is cautioned that the similarities between the surficial sinters at Blue Hill and Cerro Blanco noted above do not necessarily imply that the Blue Hill sinter will itself be underlain by higher grade mineralization, or that any such mineralization discovered will be economic.

A first pass drill campaign is currently being planned and permitted, and is expected to commence in Q3 2014. Up to 2000 m of drilling are contemplated for this first pass program, with drill holes being designed to test the most prospective of the geophysical anomalies associated with the mineralized sinter.

The Company has been granted the option to acquire a 70% interest in the Property (subject to a 2.5% NSR royalty on a portion of the Property). The option may be exercised by making cash payments to Otis totaling US$525,000 and incurring exploration expenditures on the Property totaling US$5,000,000, over a period of four years.


Radius has been exploring for gold in Latin America for over a decade. The Company has a strong treasury as a result of exploration asset sales and is looking for project acquisition opportunities across the globe.