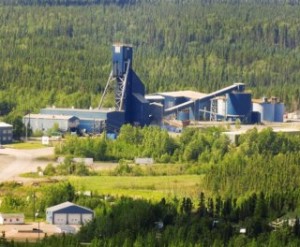 QMX GOLD CORPORATION (TSX:QMX) has received regulatory approval from the Quebec Government to proceed with custom milling ore from the McGarry Mine owned by Armistice Resources Corporation (TSX:AZ) pursuant to an agreement previously announced on June 14th, 2013.

QMX and Armistice are now making final preparations for QMX Gold’s Aurbel Mill to receive ore transported by Armistice in the next few weeks.
Under this agreement, QMX Gold will be responsible for the handling, milling, refining and tailings disposal from ore delivered by Armistice. The initial shipment will consist of 10,000 tonnes of ore, including some development ore, currently held in stock pile. Subsequent deliveries will be made of approximately 5,000 tonnes per month, totalling 30,000 tonnes.

Francois Perron, President and CEO of QMX Gold, commented: “Now that regulatory approval has been received, we have begun preparations to receive the initial shipment of ore from Armistice, expected by mid-July. We look forward to working with Armistice under this mutually beneficial agreement that provides the necessary ore processing for Armistice and incremental cash flow for QMX Gold.”

QMX Gold Corporation is a Canadian publicly traded mining company focusing on mine development and exploration in Quebec and Manitoba. QMX Gold continues to operate in the Val-d’Or area with production estimated at 20,500-23,500 ounces of gold per year. The Company also owns property at the Snow Lake Mine which has a Measured and Indicated Mineral Resource of 5.4 million tonnes grading 4.45 g/t Au for approximately 720,000 oz of gold. The Snow Lake Mine is expected to produce 80,000 ounces of gold per year.