Purepoint Uranium Group Inc. (TSX-V: PTU) announced today that geology at the Smart Lake JV, a project owned jointly by Cameco Corp. (73%) and Purepoint Uranium Group Inc. (27%), has been reinterpreted based on new regional knowledge of basement hosted uranium deposits.  The Smart Lake property is situated in the southwestern portion of the Athabasca Basin, approximately 18 km west-northwest of the Hook Lake Project and 60 km south of the former Cluff Lake mine.

“Basement-hosted uranium mineralization was encountered at Smart Lake during our initial drill programs,” said Scott Frostad, Purepoint’s VP Exploration. “During the re-logging of our Smart Lake drill core this summer, it was immediately recognised that the rocks were similar to those encountered at our Hook Lake JV project. The Smart Lake target areas are seen as extremely prospective and we look forward to advancing this project further”.

Representatives from both Purepoint and Cameco Corp. carried out work at the Smart Lake project in June, focused on re-logging and reviewing the core from the 2008 and 2012 drill programs.

Upon subsequent analysis and interpretation, it was found that the geology of the Smart Lake Property (Figure 1) can be broadly broken into two rock types; felsic orthogneiss (dominated by pink, granite gneiss with lesser granodiorite and local tonalite gneiss) and mafic orthogneiss (grades from diorite to gabbro). The contrast in competency between the highly competent felsic rocks and the softer mafic rocks has focused displacement along lithologic contacts allowing for increased flow of hydrothermal fluids.

Known uranium mineralization at Smart Lake is associated with the Shearwater conductor, a 20 to 25 metre wide, steeply west dipping, north-northwest (NNW) striking and hydrothermally altered, graphitic-pyritic band of mafic orthogneiss. The Shearwater conductor is conformable with the dominant NNW striking, west-dipping gneissosity, the same orientation of the proximal linear magnetic highs. The gneissosity would be the first planer structure created, referred to as “S1”, and it was produced by an east-west shortening, the first phase of deformation referred to as “D1”.

The most prospective target may be the Groomes Lake conductor which, unlike other conductors, strikes north-east. When accommodating  north-south compression (D2), which produced the east-west faults (S2), this orientation may have been favourable for enhanced dilation, fluid flow and uranium deposition.

Purepoint, as operator, holds a 27% ownership of the Smart Lake project in joint venture with Cameco Corp.

The Smart Lake property includes two claims with a total area of 9,860 hectares situated in the southwestern portion of the Athabasca Basin, approximately 60 km south of the former Cluff Lake mine and 18 km west-northwest of Purepoint’s Hook Lake JV Project.

Depth to the unconformity, where it occurs, is relatively shallow at less than 350 metres.

Aeromagnetic and electromagnetic patterns at Smart Lake reflect an extension of the patterns underlying the Shea Creek deposits (Indicated resource of 68M lbs at 1.48% U3O8) 55 km north of the property. Exploration by Purepoint and Cameco has firmly established the presence of uranium mineralization, hydrothermal alteration and the location of a number of basement electromagnetic conductors and cross-cutting east-west structures yet to be drill tested.

Similar to the Kianna fault at Shea Creek, known uranium mineralization at the Smart Lake project is associated with the intersection of the east-west Arthur Fault and north-south-striking fluid/chemical traps including the Shearwater conductor and chloritized mafic orthogneiss. The occurrence of low-grade uranium mineralization along the Arthur Fault away from Shearwater conductor underscore the need to target east-west structures both at the intersection with conductive anomalies and at magnetically interpreted lithological contacts.

Additional east-west striking faults (Groomes Lake and Cristobal) have been interpreted from examination of airborne magnetic and electromagnetic surveys. These faults are spatially related with strong EM conductors identified in both airborne and ground-based surveys.

The best uranium intercepts for each hole of the 2008 and 2012 drill programs are provided below. Note that holes SMT08-03 and 04 were drilled along strike over 4 km south of the other drill holes and their results suggest background uranium concentrations in basement rocks are typically less than 4 ppm.

Purepoint Uranium Group Inc. is focused on the precision exploration of its ten projects in the Canadian Athabasca Basin, the world’s richest uranium region. Established in the Athabasca Basin well before the initial resurgence in uranium earlier last decade, Purepoint’s flagship project is the Hook Lake Project, a joint venture with two of the largest uranium suppliers in the world, Cameco Corp. and Orano Canada Inc.  The Hook Lake JV is on trend with recent high-grade uranium discoveries including Fission Uranium’s Triple R Deposit, NexGen’s Arrow Deposit and Purepoint’s Spitfire discovery. 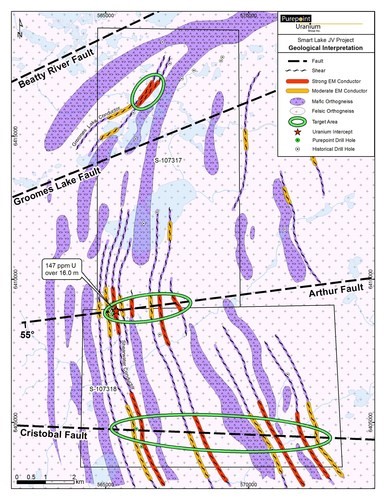