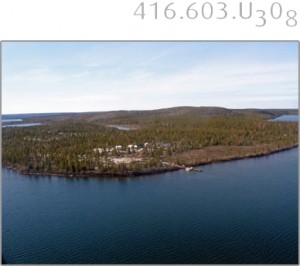 Purepoint Uranium Group Inc. (TSX VENTURE:PTU) is pleased to report that at last week’s Technical Committee meeting, Rio Tinto Exploration Canada Inc. presented plans for a 2,500 metre drill program this winter at Purepoint’s Red Willow Project in Saskatchewan’s Athabasca Basin. Purepoint optioned the property to Rio Tinto, allowing them to earn a controlling interest in the Red Willow Project by spending up to $22.5 million in exploration and development expenses.

“We are very pleased to see Rio Tinto’s continued commitment to the advancement of the Red Willow project” said Chris Frostad, Purepoint’s President & CEO. “This, in addition to the planned program at Hook Lake, will result in 7,500 metres of drilling this winter with the full financial backing and technical support of three of the largest uranium producers in the world.”

One of the drill targets this winter will be the electromagnetic (EM) conductors at Geneva that are within a distinct fold structure as highlighted by the aeromagnetic results. Eldorado Resources, a predecessor to Cameco, intersected a graphitic fault zone in hole RAD-27 that returned 0.22% U3O8 over 1.0 metres during a 1984 drill program. Cameco ranked the basement alteration of 366 historic drill holes on their Rabbit Lake project during 1995 using pathfinding elements (Pb, Ni, Cu, U, total clay and chlorite) and a hole from the Geneva area, RAD-17, returned the highest alteration score.

Like Geneva, the Osprey area is a fold structure locally associated with strong hydrothermal alteration and anomalous uranium mineralization. A primary drill target this winter will be an interpreted E-W graphitic structure coincident with a multi-point, multi-element soil anomaly east of the main Osprey conductor where a 0.20% eU3O8 over 5.8 metres intercept was previously identified.

Drill targets within the Lasby and Mustang areas are based on historic diamond drill results where significant intercepts of clay alteration were noted, interpreted as strong hydrothermal alteration, however the shallow depths of the holes did not fully test these prospective areas.

The Red Willow property covers 25,612 hectares on the eastern edge of the Athabasca Basin. The Athabasca sandstone is shallow and the depth to unconformity varies from zero to 80 metres. The basement rocks are composed of intensely deformed and metamorphosed sedimentary, volcanic and plutonic rocks trending NE to SW. Five major uranium deposits are located along a NE to SW mine trend that extends through the Red Willow Project.

Purepoint Uranium Group Inc. is focused on the precision exploration of its twelve projects in the Canadian Athabasca Basin. Purepoint proudly maintains project ventures in the Basin with three of the largest uranium producers in the world, Cameco Corporation, AREVA and Rio Tinto. Established in the Athabasca Basin well before the initial resurgence in uranium earlier last decade, Purepoint is actively advancing a large portfolio of multiple drill targets in the world’s richest uranium region.