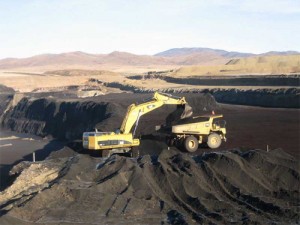 Prophecy Coal Corp. (TSX:PCY)(OTCQX:PRPCF)(FRANKFURT:1P2) is pleased to announce that in the last 60 days, it has entered into binding coal sales contracts with a number of buyers which will involve the sale of over 30,000 tonnes of coal per month (annualized rate of over 360,000 tonnes) from the Company’s Ulaan Ovoo mine.

The buyers include cement plants, a metallurgical plant, a heat plant, chemical plants and Russian traders. The off-take quantity and variety of customers reflect the Company’s significant efforts to drive higher margin sales while satisfying government power plant needs, which are excluded from the 30,000 tonnes per month forecast. All sales require pre-payment, as has been the Company’s practice since January 2013.

The mine and Prophecy’s own mining equipment can support mining of up to 1 million tonnes of coal per year according to designed capacity. The Company continues to survey its existing 28 customers and talk to new prospects, anticipating further increases of monthly sales forecast as winter preparation begins.

The orders reflect strong demand in Mongolian and Russian markets, whereby economies are growing at double digit rates, and local thermal coal mine production is declining. The average sales prices are robust, in line with our news release dated June 24, 2013, and are materially higher than our average realized price in 2011 and 2012, whereby majority of the customers then were government entities.

The Company cautions that mining operation of Ulaan Ovoo mine has been curtailed since July 2012. Some orders will be delivered in August and September from the existing coal stockpile. Fulfilling all the off-take agreements is contingent on a mine restart, which requires time and capital expenditures. The Company has installed significant water-pumping capacity at the mine site and will soon start pit-dewatering, aiming to start mining fresh coal by November 2013 and thereafter on a continued basis.

The Company has appointed a new mines manager, transportation manager and government advisors to manage and operate the Ulaan Ovoo mine. The Company’s 100% owned camp, mining equipment and transportation trucks are on in good condition and are on standby.

Prophecy Coal Corp. is a Canadian company listed on the Toronto Stock Exchange engaged in developing energy projects in Mongolia.