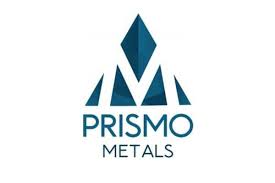 Prismo Metals Inc. (CSE: PRIZ) (OTCQB: PMOMF) is pleased to provide an update on the current drill program at its Palos Verdes project, located in the historic Panuco-Copala district of the state of Sinaloa, Mexico. A total of 1,203 meters have been drilled to date out of a planned minimum of 2,000 metres. The Company expects to complete the current drilling in early November. The Palos Verdes property is contiguous to the Panuco silver-gold project of Vizsla Silver Corp.

The drilling program is designed to test the Palos Verdes vein at depths where it is believed that potential for a large ore shoot is present, similar to the drilling accomplished by Vizsla Silver Corp. on their adjacent land package. Four holes have now been completed and the fifth hole is in progress.

Drill hole data for holes from the ongoing program:

“Much wider structural zones were intersected in the current drilling than in previous shallow drilling, which cut mainly discrete quartz veins hosted by andesitic wall rocks. Although not yet assayed, the wider zones with multiple stages of mineralization provides additional opportunities to encounter significant high-grade mineralization that the district is known for. The veins are multistage with several crosscutting and brecciation events, and exemplary epithermal vein textures are visible in the core. Another new feature of these deeper intercepts is the presence of darker gray quartz with sulfides and some fracture fillings of sulfide minerals with relatively minor gray quartz fill in the andesitic rocks adjacent to discrete quartz veins,” said Prismo President and CEO Craig Gibson.

He added: “As announced on October 11, 2022, after analyzing Vizsla Silver’s recent drill data, Prismo adopted a new protocol for sampling in the same fashion as Vizsla Silver over the wide structural zones, including in wallrocks with quartz veinlets. Additional sampling of the second and third holes has been completed and hole #4 samples are currently being prepared, as well as some from the holes from previous campaigns. A shipment to the lab is expected late this week. Assay results will be announced after the Company receives and analyzes the results for the first four holes.”

The Palos Verdes structure in holes #2 and #3 is observed to be dividing into multiple strands with variable amounts of veinlet mineralization in the andesite wall rock between them. Discrete quartz veins, measuring from 0.5 to 2 meters in width, are multistage and have locally abundant sulfide minerals in bands, mainly pyrite and sphalerite but locally with galena, chalcopyrite and possible silver sulfide. The boundaries of the structural zone are commonly observed to be sheared or brecciated and may contain fragmented vein material as well as sulfide minerals.

The fourth hole of the current drilling campaign was drilled about 200 meters southwest of the previous holes near the southwestern limit of the Palos Verdes concession. A similar wide structural zone measuring about 70 meters downhole was intersected. The true width of the reported intercepts is believed to be about 60% of the reported downhole length, or 42 meters estimated true width.

Several discrete multistage quartz veins measuring about 0.5 to 9 meters in width as well as local zones of gray quartz veins and breccia matrix are present over the 70-meter downhole structural interval. Gray quartz contains locally abundant sulfide minerals, mostly pyrite and sphalerite but locally with galena, chalcopyrite and possibly acanthite. Some of these veins show gray quartz and sulfide minerals filling fractures and breccias. Cross-cutting milky quartz veins with late amethyst filling stand out in contrast with the darker quartz and wall rock. There is more post mineral shearing and brecciation than observed in previous holes. 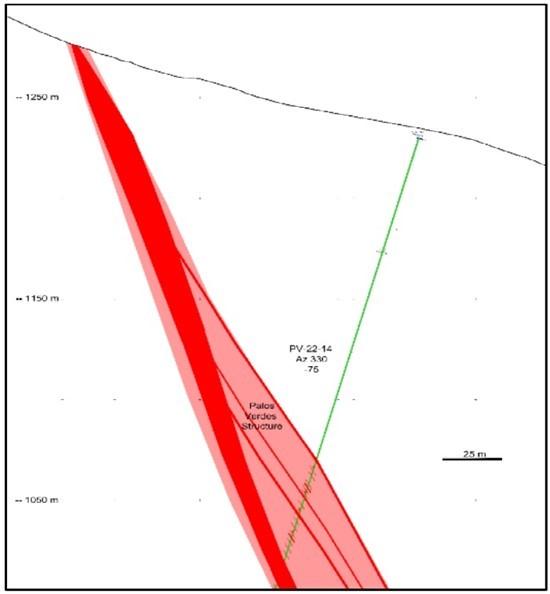 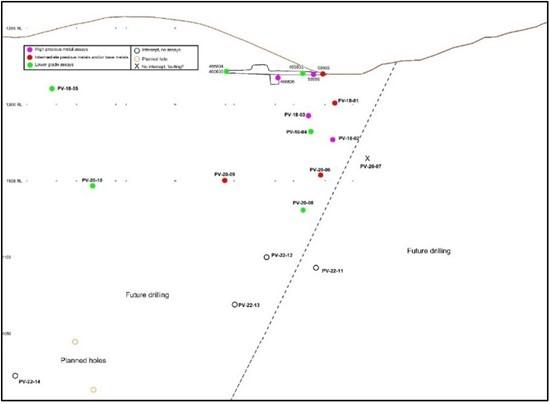 Longitudinal vein projection showing assays from selected rock samples and drill intercepts as well as drill intersections from the current program (no assays) and planned intersections.

Photos of selected portions of the structural intercepts in holes #3 (PV-22-13) and #4 (PV-22-14) are presented below and on the Prismo website.

The intercepts reported today are about 50 to 125 meters below previous shallow drilling that had several high-grade intercepts, with the best being 2,336 g/t Ag and 8.42 g.t Au over a true width estimated at 0.8 meters within a larger mineralized interval with 1,098 g/t Ag and 3.75 g/t Au over a true width of 2.3 meters (see Prismo’s news releases dated September 30 and December 20, 2020). 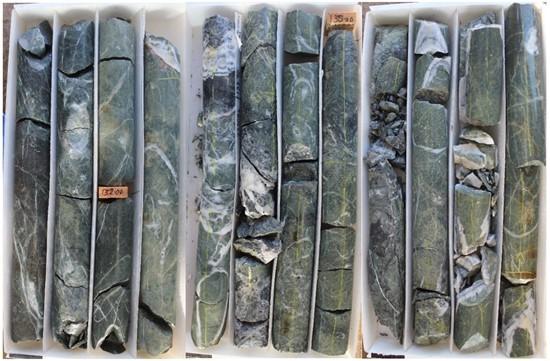 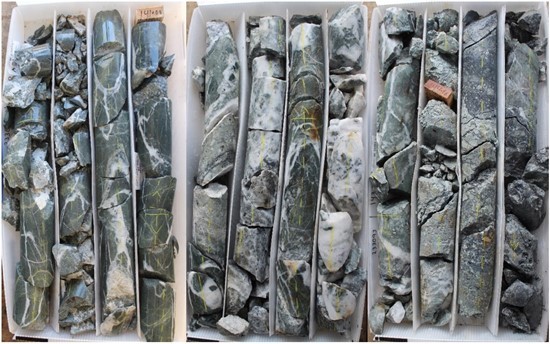 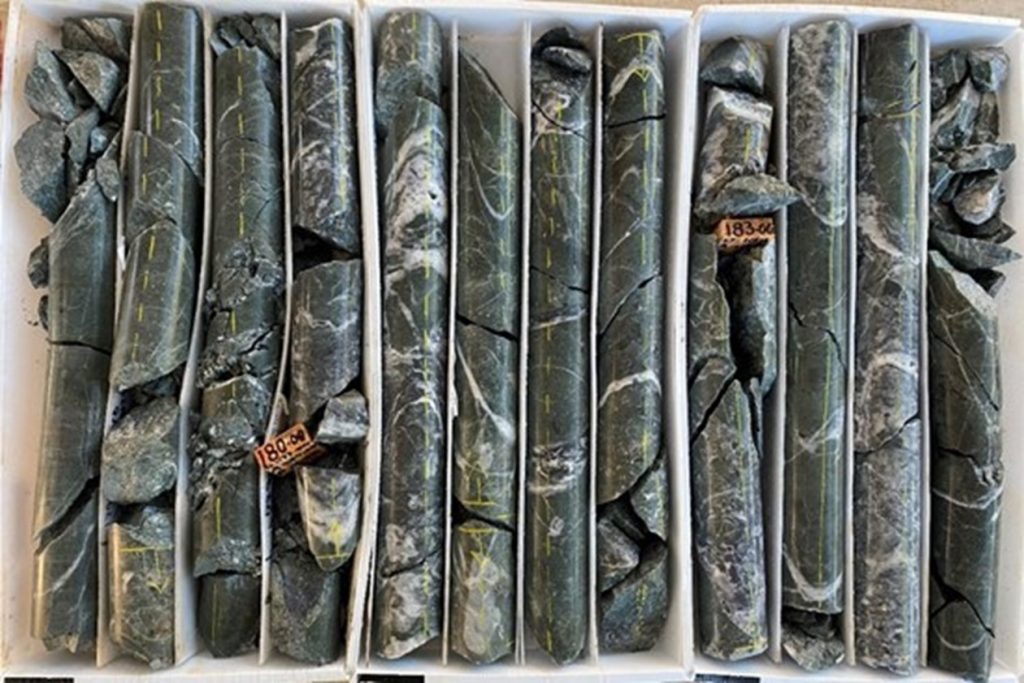 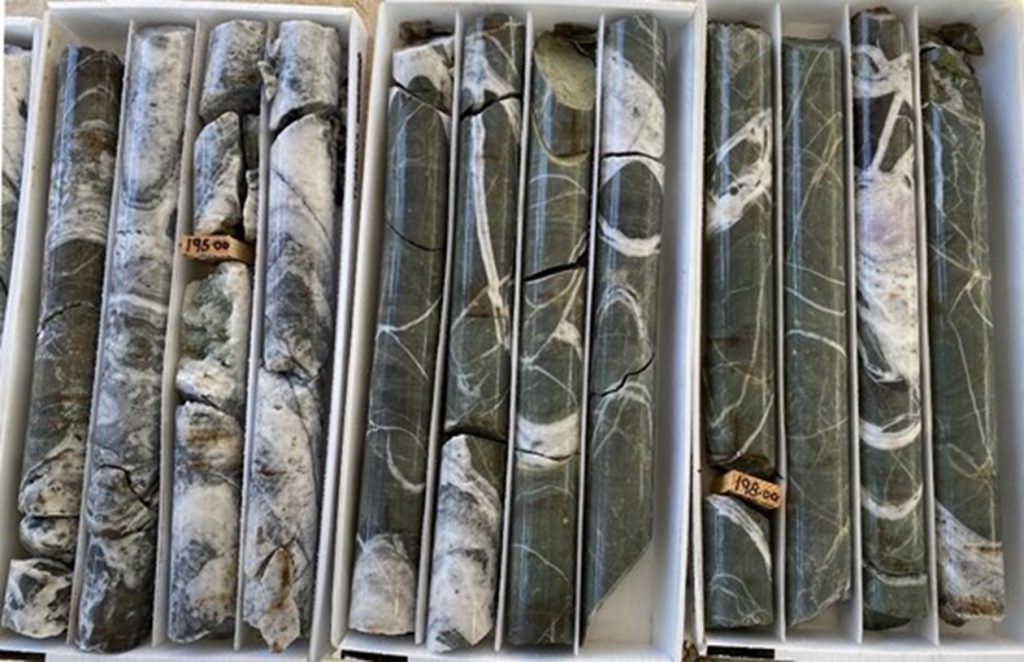 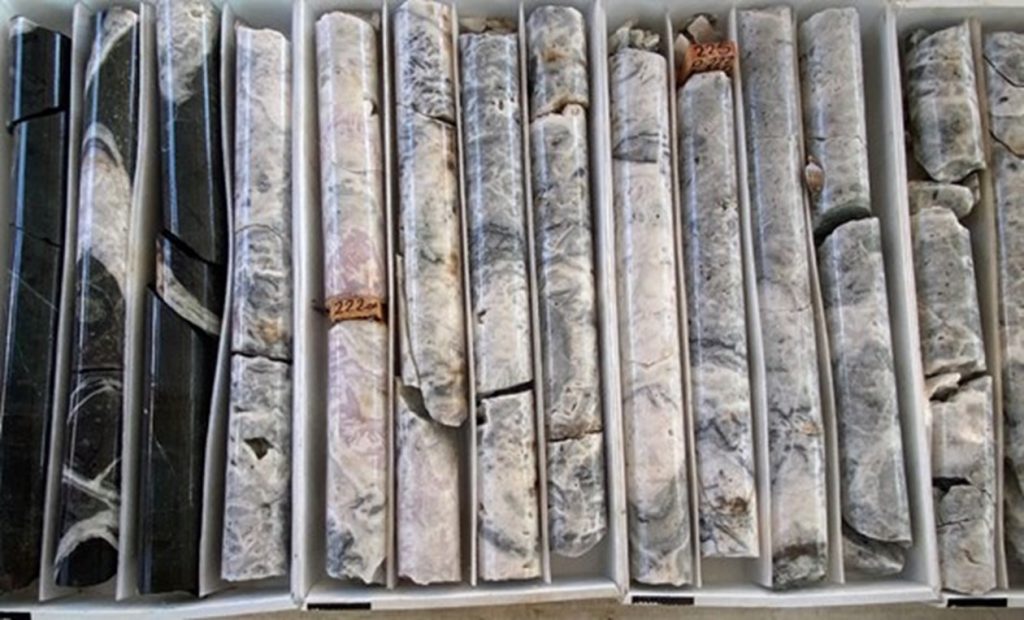 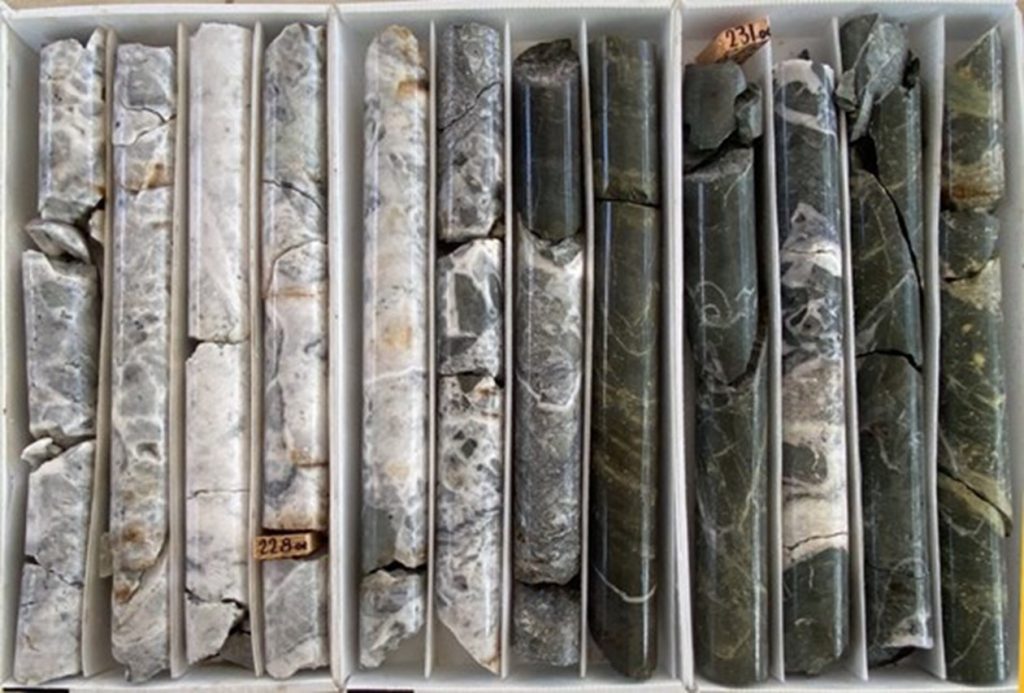 Dr. Craig Gibson, PhD., CPG., a Qualified Person as defined by NI-43-01 regulations and President, CEO and a director of the Company, has reviewed and approved the technical disclosures in this news release.

The Palos Verdes project is located in the historic Pánuco-Copala silver-gold district in southern Sinaloa, Mexico, approximately 65 kilometers NE of Mazatlán, Sinaloa, in the Municipality of Concordia. The Palos Verdes concession (claim) covers 700 meters of strike length of the Palos Verdes vein, a member of the north-easterly trending vein family located in the eastern part of the district outside of the area of modern exploration. Shallow drilling (<100m) conducted in 2018 on the Palos Verdes Vein was targeted 30 to 50 meters beneath largely barren vein outcrops and cut a well mineralized multistage vein two to seven metres wide with narrow intervals of high-grade precious metal values and subordinate base metals (see table of intercepts at www.prismometals.com). This mineralization is open in all directions and the currently planned drilling program is designed to follow it along strike and to depth.

The Palos Verdes property is contiguous to the Panuco silver-gold project of Vizsla Silver Corp. The current drill program is designed to test the Palos Verdes vein and a structural intersection with a second vein at depths where it is believed that potential for a large ore shoot is present, similar to the drilling accomplished by Vizsla Silver on their adjacent land package.