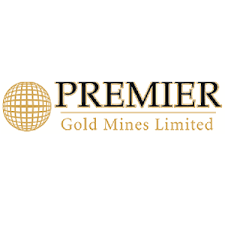 Premier Gold Mines Limited (TSX: PG) (OTCPK: PIRGF) is pleased to report on the continued success of its delineation core drilling program at the Company’s 100%-owned Mercedes Mine, located in the State of Sonora, Mexico. The campaign is focused on expanding and confirming the continuity of higher-grade mineralization in several areas including Marianas, San Martin and Diluvio West. Highlights of recent results (in true widths) include:

“Our recent delineation drilling at Marianas, San Martin and Diluvio West confirm that these zones are emerging as important contributors to the future production at Mercedes,” commented Stephen McGibbon, Executive Vice–President. “We are excited by these three major areas that have yielded some of the best grade intercepts over the past several years.”

Marianas represents the down-plunge extension of the main Mercedes mine trend, which remains open at depth. A delineation program of 5,000 m will be completed by the end of the year. This program is conducted from a nearby ramp, driven from the Lagunas mine workings, which will be used as access for future mine development. 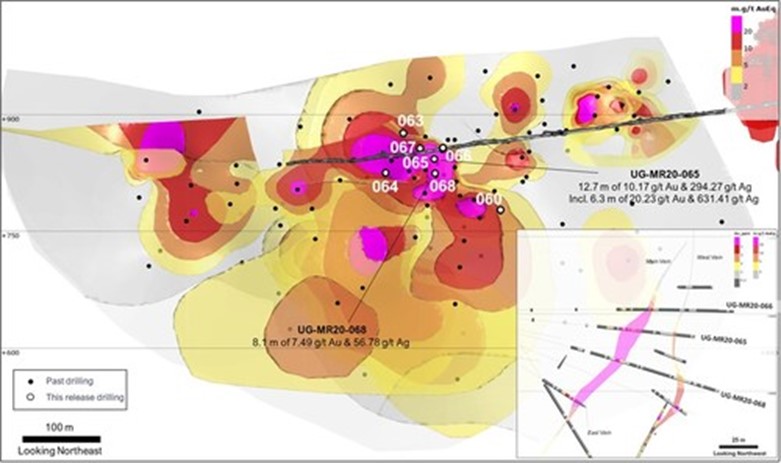 San Martin, located 600 m to the west of Lupita, was discovered with an intercept of 1.5 m of 5.56 g/t Au (L19-396D) in May 2019. The delineation program underway at San Martin has identified a fault on the eastern portion of the deposit, along which the vertical displacement is interpreted to be 170 m. Further drilling is planned to prospect for the vein at depth. Drilling in 2020, focused on the eastern portion of San Martin, to define the extension of the mineralization and the potential for inferred resources (Table 2, Figure 2).

Highlights of the program include 4.2 m grading 10.03 g/t Au & 118.89 g/t Ag (L20-534D), confirming prospective continuity towards the Neo target to the north. Drilling at the edge of Lupita Extension returned 1.8 m grading 5.31 g/t Au & 131.42 g/t Ag (L20-528D), demonstrating further potential to the north. Assay results are still pending for several holes that intercepted veins that are visually encouraging. Drilling to date continues to expand San Martin and increases confidence in the grade of the zone. 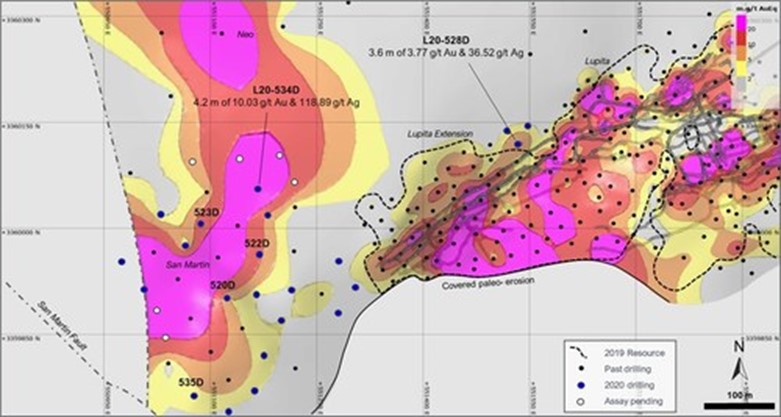 Diluvio West consists of a vein stockwork system within a broad envelope. The underground drill program has increased confidence in the grade and should result in an upgrade from a resource to a mineral reserve. The program returned several large intercepts of higher grades within the core of the zone and has successfully delineated the extent of mineralization. 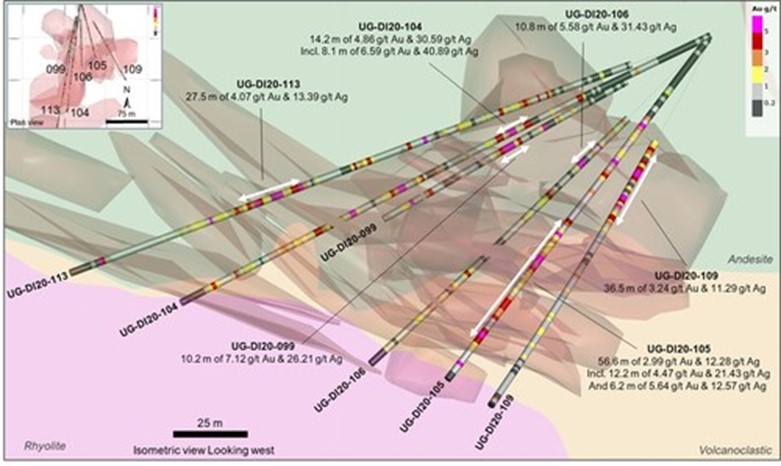 Premier Gold Mines Limited is a gold-producer and respected exploration and development company with a high–quality pipeline of precious metal projects in proven, accessible and safe mining jurisdictions in Canada, the United States, and Mexico.

Julie-Anaïs Debreil, P.Geo., Ph.D., is the Qualified Person for the information contained in this press release and is a Qualified Person within the meaning of National Instrument 43 -101. Mercedes assay results are from core samples sent to ALS Chemex, an accredited mineral analysis laboratory in Lima (Peru) or Vancouver (Canada), for preparation and analysis utilizing both fire assay and ICP methods. For a complete description of Mercedes’s sample preparation, analytical methods and QA/QC procedures refer to the technical report for the Mercedes Mine dated April 18, 2018 (effective date December 31, 2017), entitled “Technical Report on the Mercedes Gold-Silver Mine, Sonora State, Mexico.”