Plug-In Electric Vehicles on Roads in the United States Will Surpass 2.7 Million by 2023, Forecasts Navigant Research

Plug-In Electric Vehicles on Roads in the United States Will Surpass 2.7 Million by 2023, Forecasts Navigant Research 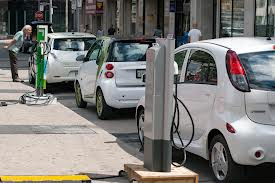 The largest regional market for plug-in electric vehicles is North America, with estimated 2013 sales of slightly less than 100,000.  Navigant Research expects that figure to grow rapidly over the next 10 years, as more models become available, the price premium for PEVs compared to conventional vehicles narrows, and charging infrastructure is deployed widely.  According to a new report from Navigant Research, the number of PEVs on roads in the United States will grow from nearly 296,000 in 2014 to more than 2.7 million in 2023.

“The U.S. market for plug-in electric vehicles is reaching a new level of maturity and expansion,” says Scott Shepard, research analyst with Navigant Research.  “The introduction of PEV options in the truck, van, and sport utility vehicle segments – which make up half the North American automotive market – will help drive strong growth in the PEV market going forward.”

The major regional PEV markets, North America, Western Europe, and Asia Pacific, will grow at a compound annual growth rate of 23.7 percent through 2023, according to the report.  Outside of the United States, the largest urban markets will be Tokyo and Paris, with PEV sales in 2023 of nearly 49,000 and 25,000 vehicles, respectively.

The report, “Electric Vehicle Geographic Forecasts”, provides a detailed examination of the market opportunity for PEVs in North America and within select cities in Europe and Asia Pacific.  Forecasts for PEV sales and vehicles in use (parc) for North America, as well as five select PEV markets in both Europe (London, England; Paris, France; Berlin, Germany; Amsterdam, Netherlands; and Oslo, Norway) and Asia Pacific (Tokyo, Japan; Seoul, South Korea; Sydney, Australia; Hong Kong; and Singapore), extend through 2023.  The forecast model for each region, which has been updated to align with actual sales data from 2013, incorporates an analysis of the variation between fuel costs for conventional vehicles and PEVs, as they vary by region.  An Executive Summary of the report is available for free download on the Navigant Research website.